In case you didn’t know; the Washington Post has a good explanation of why you nor I have probably never eaten real wasabi. 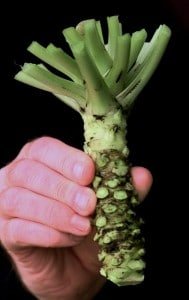 But even the common substitute can have unexpected side-effects.

I recently read of a woman from Israel who mistook Wasabi (the ubiquitous phoney version) for avocado, and consumed about a teaspoon of it. It gave her an attack of takotsubo cardiomyopathy, commonly known as “broken heart syndrome.”

It’s easy to think “how stupid,” but I can empathize. My own journey with Japanese food began in the late 80s when I was doing a lot of traveling. I was passing through New York on business I decided I would try sashimi for the first time, and they brought me a lovely little platter of the famous delicacies. I gingerly tried this and that (pun on *gari* intended), until I came to this little green ball. Knowing nothing no never at all and thinking it was some kind of fish paste, I popped it in and down it went.

The floor did a samba, my ears rang like the bells of Old Bailey, my eyes spun backwards and I screamed “A Eywa! Lu tstal-txewk mì re’o oeyä!” (Oh God! There’s an axe in my head!) After things had settled down, I used my best broken Japanese to ask my server “What in the name of Sugawara no Michizane was *that*???”

At which point I learned that balls of Wasabi, real or ersatz, are not to be eaten whole. But I can see how someone who had a particular susceptibility could be adversely affected why such an experience.

For what it’s worth, I still love sashimi and still use wasabi, but only in the recommended small doses.

Except for NPR and a few XM Radio oldies stations, I haven’t been much of a radio listener in the last couple of decades. In the 80s and 90s I would listen to KOMO in Seattle and Olympia, and then KSL radio in Salt Lake as I would drive to work, so when we moved to Maine and people asked me how I was doing, and I responded “better than I deserve,” they would invariable respond with “Oh, you listened to Dave Ramsey.”

Well, no. With all due respect, I had never heard of him. But for the last 10 years or so, it’s been my go-to answer to that question. There were times I would say, “If I were any better I’d have to be twins,” and sometimes I truly felt that way. But the older I get, the more I realize that I have truly been blessed beyond my deserts.

Sometimes when I say this to people, they’ll come back with “Oh, you shouldn’t say that, I’m sure you deserve it!” And that’s a nice thought too. But as I cast my mind over the past almost-70 years, I realize that I have been preserved from destruction or serious injury more times than I can count, and I’m sure more times than I’m even aware of.

Almost all of these events were precipitated by my own stupidity. Things could have turned out much, much worse for me and my family. But by the grace of God, they didn’t. I was spared, and protected, even if I wasn’t living my life as well as I might have been. I still have challenges. I still face trials. But thus far I have awakened each day not dead, with new opportunities and new blessings. The Lord is kind, and I am grateful. ¹

I am truly “better than I deserve.”

¹ There will be those who say I was fortunate for other reasons – coincidence, or no reason at all, since the universe doesn’t care one way or the other. Whatever makes them happy.

This collection of statements, lovingly documented, was put together by redditor u/iamlarrypotter. I share it here for the benefit of those who do not particpate over at reddit.

If you want a classic, textbook example of narcissistic personality disorder, look no farther than 45. And then remember that this man has access to our nuclear launch codes. Our nation has never been in a more precarious state of affairs, and the damage this uneducated buffoon has done both domestically and internationally will take generations to repair.

“I’m much more humble than you would understand.”

“I’m the most successful person ever to run for the presidency, by far. Nobody’s ever been more successful than me.”

“I’m the least racist person you have ever interviewed”

“Number one, I am the least anti-Semitic person that you’ve ever seen in your entire life. Number two, racism. The least racist person”

“I’m the best thing that’s ever happened to the Secret Service.”

“I am the world’s greatest person that does not want to let people into the country.”

“No one has done more for people with disabilities than me.”

“Nobody in the history of this country has ever known so much about infrastructure as Donald Trump.”

“There’s nobody who understands the horror of nuclear more than me.”

“There’s nobody bigger or better at the military than I am.”

“There’s nobody that feels stronger about the intelligence community and the CIA than Donald Trump,”

“There’s nobody that has more respect for women than I do,”

“I would build a great wall, and nobody builds walls better than me, believe me”

“I am going to save Social Security without any cuts. I know where to get the money from. Nobody else does .”

“Nobody respects women more than I do”

“And I was so furious at that story, because there’s nobody that respects women more than I do,”

“She can’t talk about me because nobody respects women more than Donald Trump,”

“Nobody has more respect for women than Donald Trump!”

“Nobody has more respect for women than I do.”

“Nobody has more respect for women than I do. Nobody.”

“Nobody reads the Bible more than me.”

“Nobody loves the Bible more than I do”

“Nobody does self-deprecating humor better than I do. It’s not even close”

“Nobody knows more about taxes than I do, maybe in the history of the world.”

“Nobody knows more about trade than me”

“Nobody knows debt better than me.”

“I think nobody knows the system better than I do”

“I hope all workers demand that their @Teamsters reps endorse Donald J. Trump. Nobody knows jobs like I do! Don’t let them sell you out!”

“I know more about renewables than any human being on earth.”

“I know more about ISIS than the generals do.”

“I know more about contributions than anybody”

“I know more about drones than anybody,”

“I know more about Cory than he knows about himself.”

“I know tech better than anyone“

“I’m very highly educated. I know words; I have the best words.”

“I watch these pundits on television and, you know, they call them intellectuals. They’re not intellectuals,” Trump told thousands of supporters in the swing state. “I’m much smarter than them. I think I have a much higher IQ. I think I went to a better college — better everything,”

“@ajodom60: @FoxNews and as far as that low-info voter base goes, I have an IQ of 132. So much for that theory. #MakeAmericaGreatAgain”

Sorry losers and haters, but my I.Q. is one of the highest -and you all know it! Please don’t feel so stupid or insecure,it’s not your fault

“He’s been quite critical of you as you know. He’s attacked you for being ignorant,” Piers Morgan said to Trump. “Let’s do an IQ test,” Trump interrupted

“You know, I’m, like, a smart person. I don’t have to be told the same thing in the same words every single day for the next eight years,” Trump told Fox News last December.

Asked on MSNBC’s “Morning Joe” who he talks with consistently about foreign policy, Trump responded, “I’m speaking with myself, number one, because I have a very good brain and I’ve said a lot of things.”

” … I think that would qualify as not smart, but genius….and a very stable genius at that!”

In this Salon article, Yale psychiatrist Dr. Bandy Lee states that “Trump’s mental health is now a “national and global emergency.” My personal opinion is that The Thermonuclear Bowel Evacuation Currently Disgracing the Oval Office has brought us closer to global destruction than any other administration, Bush/Cheney included.