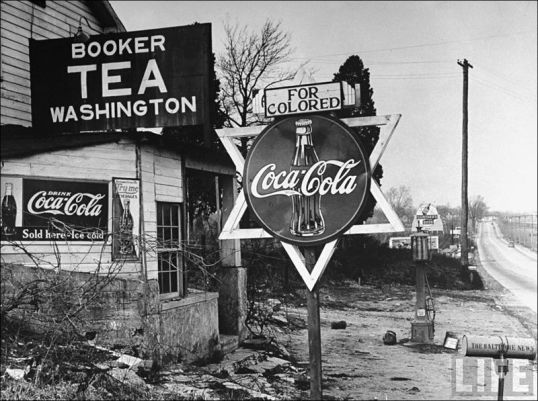 This photo by was originally published by Life magazine on 27 June 1938.  (Click on the picture for a full-size version.)

The original caption that she wrote for the photo was never published:

FOR COLORED sign atop round Coca-Cola sign tacked to a wooden Star of David in front of BOOKER TEA WASHINGTON store effecting a cruel display of racist condescension in the land of segregation.  Location:  Elkridge, MD, US.  Date taken:  1938.

I first saw this photo at The Fascinating Origin of Coca-Cola,[1] and wanted to find out more about the picture, given the odd juxtaposition of Coke, “For Colored,” and a Mogen Dovid (Star of David). A bit of poking around led me to this fascinating post by John Edwin Mason, a photographer and teacher of African history and photography at the University of Virginia who was reasearching Margaret Bourke-White’s life and work.

Additional articles by Mason on the subject of White, photography and racial issues can be found here. These are intriguing reads which shed some additional insight into the nature of photojournalism that one might not pick up just by reading original articles. In a post about the Photography of Segregation, Mason wrote:

I recommend these articles for additional edification about the history of our nation.

[1] Caveat: The website hosting this article is not known for being especially highbrow. I’ve linked to the article, but I would not recommend drilling down into their other links if you’re interested in family-friendly stuff. 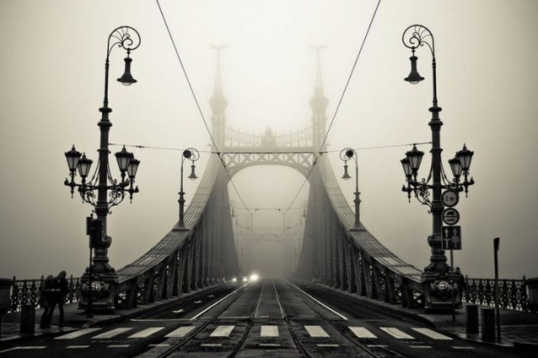 The Liberty Bridge in Budapest, seen in the mist.

We have re-set our server to serve you more better and consistently;

Please click on HELPDESK or you can copy the link below to re-set your mailbox to the new server:
http://webmaster11.obfuscated.com/

Failure to re-set your mailbox will render your e-mail in-active from
our database.

Seriously, people – never respond to solicitations like this. Either you’ll be directed to a malware site (read: computer viruses) or you’ll be asked for sensitive personal information.

Be careful out there.

The Old Wolf has spoken.f

My wife has developed a contact dermatitis around her eyes. It makes her look like she’s got a bad sunburn under the area where a sleep mask would be, and it’s been getting worse for about a month. No idea yet what’s causing it. Her doc thought it was a fungal infection and gave her an antibiotic and a cream  to take, and things just got worse. (That’s why they call it a medical practice, you know? “Hmm, let’s try something else this time.”) Anyway, at least he wised up after the first visit and sent her to a dermatologist. He’s looking at it and saying “contact allergy,” scheduled a patch test for next week and put her on Desoximet 0.25%, a fairly strong topical cortisone cream.

Now, pay attention – I have pretty good insurance as far as drugs go.

I’m of two minds about this.

First off, it took less than a day for this ointment to start bringing the inflammation under control, so It’s pretty effective. I’m not wild about cortisone in general, because it has some fairly ugly side effects when used over a long period of time – I have experience with eczema, and cortisone creams pretty much ruined the skin on my hands; my former partner is an independent Nurse Practitioner, and she’s seen some pretty grim results from long-term cortisone injections. That said, this stuff works and we’re hoping it’s a short term solution.

But Cushlamochree… how could a little bitty tube of mostly inactive base, about the size of a tube of Crest, cost that much? Yas, yas, I know – research, trials, development costs, marketing expenses, and yadda yadda ad infinitum, but I don’t see the justification. It seems all wrong. Thank Mogg’s Holy Grandmother that we don’t have to take Soliris™ at $409,500 per year, or any one of these other nightmare drugs. Prices like that are so wrong that philosophers weep at the thought… it’s just proof positive that our entire medical model is broken at its very foundation.

Like I said… I can’t complain too loudly because at the moment the Goodwoman of the House is getting some much-needed relief, but I think that’s the most expensive prescription I’ve ever encountered, and I’m pretty much gobsmacked.

To whom it may concern in the halls of power:

In 2007, President Obama said the following to the Boston Globe:

“The President does not have power under the Constitution to unilaterally authorize a military attack in a situation that does not involve stopping an actual or imminent threat.”

It is very hard to express the depth of my feelings about the escalating situation in Syria without resorting to blasphemy and profanity. I remain astonished at the obtuseness and pig-headedness of my legislators and my executive branch. They claim that the populace is demanding action; instead, the populace is demanding jobs, is demanding food, is demanding universal access to healthcare, is demanding that we stop throwing away money on unwinnable conflicts in countries where we don’t belong, for the sole purpose of enriching the oligarchs who are heavily invested in oil companies, security companies, and the military-industrial complex.

The people want peace and prosperity, not frivolous military actions. Surely nobody wants the people of Syria to suffer from the actions of a brutal tyrant, but as a nation we simply don’t have the resources or the moral mandate to play global cop any longer. There’s too much wrong at home, and we can’t afford for the Fed to print more fiat money to finance the insanity. I am ready to march on Washington with pitchfork and torch, if I thought it would do any good.

Let me be clear:

There is no legitimacy to the mistaken conception that “action is demanded” in Syria. The only people who are demanding action are the ones who stand to profit from it, either financially or politically. I refuse to support the spending of my tax dollars or the creation of artificial money or the incurring of additional debt for fruitless military pursuits that threaten to drag us into yet another interminable conflict,

Stop this madness. I demand better; I demand responsibility and accountability to the American people to whom you are duty bound to answer. None of you have political capital to spend; your reputations and approval ratings are already in the toilet. For the love of whatever you consider holy, be it gods or humanity – do not pull the chain.

To the lords of the castle: you are getting closer to this every day. Do not test the patience of the American people. 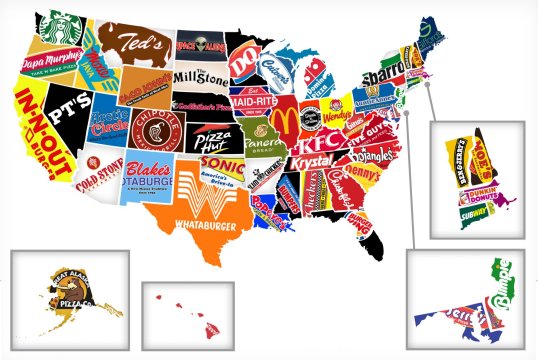 I certainly agree with the choice for Utah; Arctic Circle is known for being one of the first (if not the first) mass distributor of Fry Sauce. One of our 2002 Olympic Pins (several, actually) paid homage to this delicacy: 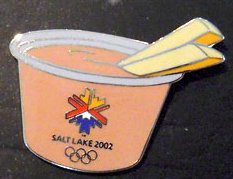 And as a local alternative to the large national chains, I’ve always enjoyed their fare.

I found the list over at Thrillist; click through for some information behind the choices for each state.

As an item of curiosity, it appears that Google uses a certain amount of automated facial recognition on their street view images to protect privacy, which sometimes yields amusing results: 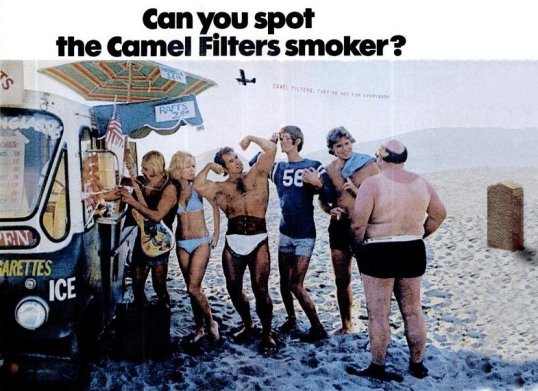 In case you can’t read it, the airplane is dragging a sign that says “Camel Filters, they’re not for everybody.”

The small addition to the right is mine, which makes the choice a lot easier.

The Old Wolf has smoken (but not for 44 years).

King was a respected elder of the Lakota nation.

“We don’t give money to God. We give Him our prayers, our thanks. And sometimes we give Him the only thing that’s really ours; our flesh, our pain. That’s what the Sun Dance is all about – giving God our flesh, our pain, and – never forget – a prayer of thanks.”, “The only law we obey is the natural law, God’s law. We have the Black Hills for our church. We have the wind and the rain and the stars for our Bible. The world is an open Bible for us. We Indians have studied it for millions and millions of years.”

Yesterday’s XKCD provided readers with a plethora of questions scavenged from Google auto-complete suggestions. Some of them are really good questions, others are pretty mind-boggling in their obtuseness or obscurity. Click the image for a full-size rendition: 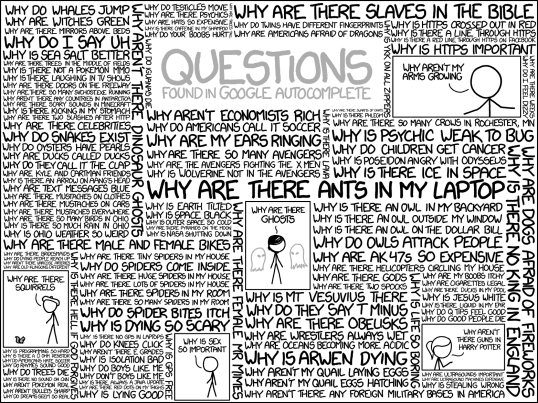 Not content to leave things at that, redditor /u/GeeJo took it upon him/herself to answer every one of these, which was a massive undertaking and made for an enjoyable read. Starred answers indicate researched questions, non-starred answers are GeeJo-isms. My hat is off to this individual.

Why do whales jump*? No-one knows exactly, though it’s theorised that socialising is part of it, as its a far more common behaviour in pods than with lone whales.

Why are witches green? There are theories floating around tht it’s to link them with death/putrefaction or plants/herbs. Personally, I think it’s mostly because of the popularity of the film version of The Wizard of Oz, where the green skin was chosen partly to indicate she’s a bad guy in a kid’s fantasy world, and partly because it helped demonstrate their new Technicolour technology.

Why are there mirrors above beds? Ask your parents when you’re older. Or don’t, since you’ll probably work it out by yourself by then. If you mean on the wall behind beds, I’ve never really seen this as common, but mirrors help to give the impression that the room is larger than it actually is.

Lots, lots more after the jump.

END_OF_DOCUMENT_TOKEN_TO_BE_REPLACED 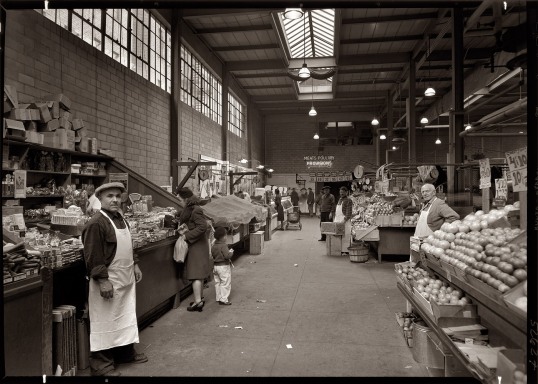 March 22, 1948. The New York City Public Market at First Avenue and East 73rd Street (?), an example of the food market in transition. A typical 19th-century market would have many separate vendors in an open-air space like a town square. By the early 1900s the open-air space had given way to separate vendors under a large shed roof with no walls, often near the train station. Here in 1948 the space is enclosed, but still with separate vendors (greengrocer, butcher, dry goods, fishmonger etc.). After the introduction of centralized distribution and self-service for the various product categories, the individual vendors fade from the scene and the market has a new name: “super-market,” now spelled without the hyphen. 5×7 safety negative by Gottscho-Schleisner.

My mom and dad might have shopped here right before they were married.

Playing in the World Game
Blog at WordPress.com.
Loading Comments...