Translation can be funny. Spend a career in and around the industry, and you hear all the jokes. The disasters. The catastrophes.

Translation students invariably hear the story of the interpreter (or the computer, depending on which version of the apocryphal story is told) who rendered “The spirit is willing, but the flesh is weak” into Russian as “The wine is good, but the meat is rotten.”

Some bad translations have long passed into legend: “The lift is being repaired today. During this time we regret you will be unbearable.” – supposedly seen on an elevator in Hungary, or Japan, or any number of other places. One can find endless lists of these on the internet, and while some are obvious fabrications, others are true because one does see such abominations out there; assembly instructions for products from the Orient used to be notoriously bad back in the 70’s, and engrish.com is still a font of amusement if you want to see bad translation work.

Let a computer do your translation for you, and you can embarrass yourself and your entire nation:

If you don’t understand the results you’re getting, it’s dangerous to use automated translation – what the original restaurant name was supposed to be, no one will ever know.

The same goes for emails, if you don’t speak the language you’re dealing with: 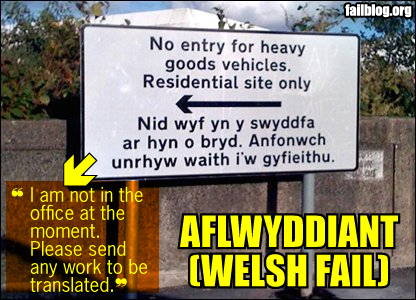 This particular sign didn’t last long, as soon as the city council members discovered what had happened.

And then, in the midst of all the hilarity, one encounters brilliance.

Now, since I use Firefox with Adblock Plus and F.B. Purity, I never see ads on the Internet, but many folks aren’t so lucky.

I’ve got more to say about the Açaí berry scam (stay tuned), but you still see these ads, and thousands like them, all over the internet. And, these ads need to be translated for other language markets. Given that the preponderance of these Facebook and Google ads are 100% bullcrap, it’s easy to see why an ethical individual would soon tire of committing electronic fraud. One Finnish translator decided to go out in a blaze of glory.

But if you’re Finnish, this is what you’d be seeing: