Edited to reflect the fact that all the lost cartoons but one have been located.

The New Yorker was a constant guest in my home as I was growing up in New York City in the 1950’s. My parents were both actors, and it seemed like it was always there, along with Variety and any number of other publications. Of course, at that age, I was interested in the cartoons most of all, and developed a deep and abiding love for the work of Charles Addams, although there were others I became familiar with as well, including W. Steig, O. Soglow, Jules Feiffer, to name just a few.

I have this picture in my mind. I can see it as clearly as if it were on the desk in front of me. It’s done in that pen-and-ink with grey wash style so popularized by Addams, and it shows the interior of a warehouse at the Heinz factory. A worker on a ladder way, way up at the top of a rack finds a single lonely can, the shelf lovingly labeled “58.” I don’t think I’m making this up, but I have never, ever, been able to find that cartoon anywhere – even with the miracle of the Internet.

I came close, though. Gluyas Williams, a wonderful cartoonist in his own right, depicted the scene in his series of industrial crises, but it’s just not the picture I had in mind. 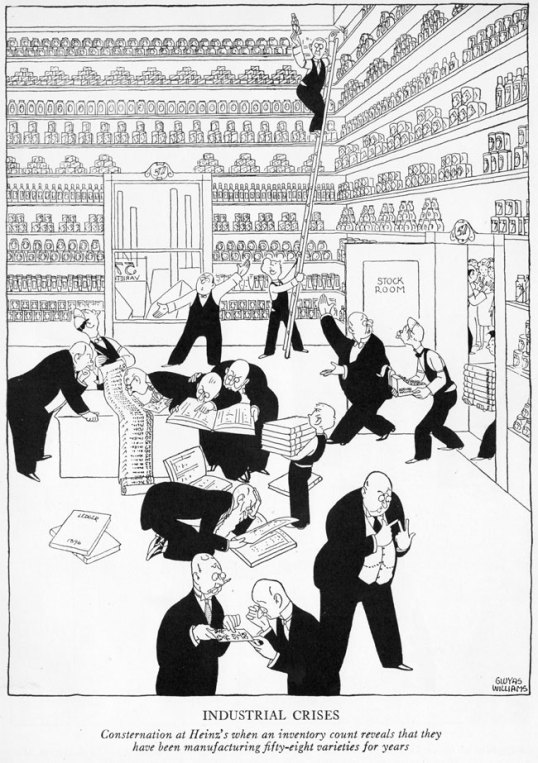 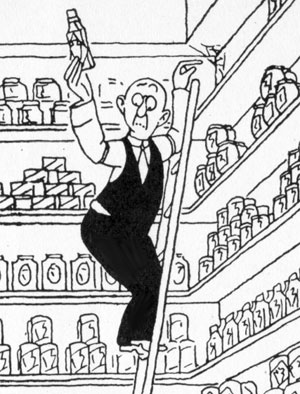 Closeup of the offending product!

Yes, this was funny. But it’s not what I had in mind. If anyone out there knows what I am talking about, or has seen or has a copy of the panel I have described, drop me a comment here. I’ve already had success with one or two other “lost” cartoons, including this gem by Howard Shoemaker (thanks to Mark Breeding for the awesome find):

My favorite Jerry Amerongen of all time (thanks to Mark Stanley for knowing the artist and the collection it was found in):

(I love the old lady strung up by her thumbs, it cracks me up ever time I look at it. Banks are really like this…)

And the iconic “retching jackal” by Al Jaffee, recently found in his wonderful biography after decades of wishing I could find a copy.

Yeah, it’s twisted – but then so is MAD Magazine, and I loved it as a kid.

There’s one more. This one I know exists, because I used to have it in my collection, but what happened to it I’ll never know. It would have been in Datamation, or one of the other comparable trade pulps, in the mid-1980’s. (See edit below)

This is a Xerox series 2700 laser printer, but when attached to a Wang OIS word processor, it was OEM’ed as an LPS-12 or an LPS-24, depending on the engine speed.

EDIT: On February 2, 2018, the Internet finally disgorged the cartoon I had been chasing for decades. Found in PC Magazine, November 15, 1988: 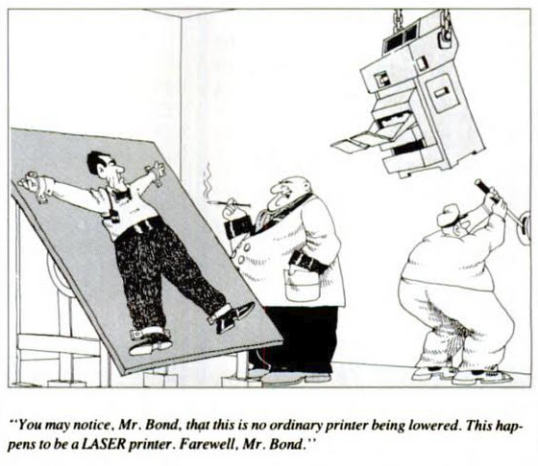 EDIT: This one surfaced thanks to reddit. It’s not really off-color, but perhaps just a bit risqué: another one that I had remembered for decades and never been able to find again, located for me by redditor /u/Haze793:

7 responses to “The Lost Cartoons: Most found, one still elusive.”