Consumer Reports runs a section called “Selling It,” which documents advertised goofs, glitches and gotchas. Years and years ago I came across a bit on a box of Cheerios™ that offered consumers a free T-Shirt. The fine print on the coupon indicated that shipping and handling was only $18.95. This was back in the days before the internet or digital photography, so I wasn’t able to capture or document it, but I was absolutely gobsmacked that  General Mills would have the chutzpah to put something like this on their product, unless it was a failure in their quality control process.

Sadly, when it comes to separating workers from their dollars, some people have neither scruples nor morals. In fact, the following ad sits at the top of my “Advertising Hall of Shame”. It appeared in Parade Magazine, on August 12, 1990 (click for a larger version):

I have never seen a more deceptive, deviously-crafted advert in my entire life. It is designed to make the uneducated or the unaware think they are getting a satellite dish for $5.00 – even though it says multiple times that they’re not. In fact, what the ad says is:

“We’re selling pretty rabbit ears. Throw away yours, and buy ours.”

But here’s the text:

ALLOW UP TO 6-8 WEEKS FOR SHIPMENT. FULL 1-YEAR MONEY-BACK GUARANTEE.

GUARANTEED TO FIRST 10,000 WHO RESPOND BEFORE SEPTEMBER 25, 1990
Throw away your old TV rod antenna! The GFX-100 looks like an outdoor satellite “dish,” but works indoors like ordinary “rabbit ears.” No wiring or installation! Legal in all 50 states. You pay NO cable fees because you’re NOT getting cable!!! You pay NO satellite fees because you’re NOT using satellite technology or service!!! Works entirely via proven “RF” technology–actually pulls signals right out of the air. Instantly locks into every local VHF and UHF channel from 2 to 83 to bring you their movies, sports and special events just like an ordinary pair of “rabbit ears.” No cable box or special attachments needed! Enhances color and clarity, helps pull in weak signals. Compatible with all TVs from 3-inch portables to giant 7-footers. Sits on any TV top in less than 4 linear inches of space! Guaranteed not to utilize, replicate, transmit or interfere with any satellite signal. Complies with all applicable federal regulations. Not technical razzle-dazzle but the sheer aesthetic superiority of its elegant parabolic design make the GFX-100 a marketing breakthrough! At this price, put one on every TV in your home! (Sorry, limit 5 per address. No dealers or wholesalers, please!) We reserve right to extend above time and quantity guarantee. Hurry!
© 1990 RBM Ltd., 1200 Shames Drive, Westbury, NY 11590

Almost every sentence in this ad can be interpreted one of two ways. It’s so devious that it’s almost beautiful. I noticed with wry humor that they never answered their own question, but the answer is clear: “Because we want your money.”

I’m curious how many of these units RBM moved, because nine years later, on July 2, 1999, the same ad appeared in the Weekly World News (which goes to show which demographic they were targeting) 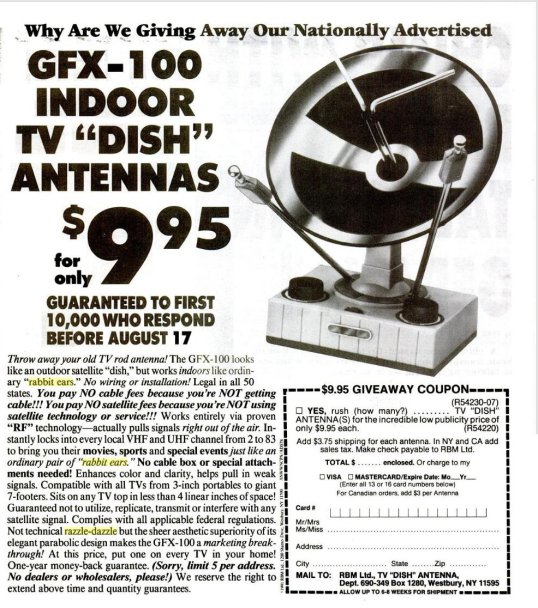 Word-for-word the same – only the price has doubled.

8 responses to “Selling it”