Update: Click through for some aerial photos of the resort in the 50’s.

In the 1940’s, 1950’s and to some extent into the 1960’s, the Catskill mountains of New York were home to a conglomeration of hotels, bungalows and cabin communities that became known as the Borscht Belt. After my father’s first marriage dissolved, his ex-wife married a Frenchman, Andre Lavielle, and opened a resort in Patterson, NY modeled on the same idea and called it Le Robinson. Miriam was the descendant of Russian Jewish immigrants; it’s unclear whether the clientele came from the same Ashkenazi Jewish population of New York that made the Catskill resorts so popular, or whether they catered to an Italian clientele (the resort featured bocce courts), but the general idea was the same – a place to get away from the City and relax.

I still have memories of visiting the place; the library, table-top shuffleboard games (metal pucks lubricated by some sort of sand), the windmill, the boating pond, and sitting on the screened veranda while an early bug-zapper incinerated unwelcome guests.

Sadly, a fire destroyed the main house, and the resort ultimately became a park. I found a description at “Businesses in the Village of Patterson:”

Le Robinson farm was located on Maple Avenue [in Patterson, NY], and was the former home of Jacob Stahl, best known as the owner of the Putnam Cigar Factory and other buildings in the village of Patterson. The house was a four story frame structure that was built in the fall of 1896, and was a showplace in Patterson when it was built. The property had two or three owners after the death of the Stahl family, and in the late 1950s was owned by Miriam M. Lavielle and Andre Lavielle. The Lavielle’s operated the house as a French restaurant and boarding house known as Le Robinson. The house had room for 50 guests, and there were cottages located on the adjoining property.

Mrs. Lavielle was instrumental in the formation of Boys and Girls Scout programs in Patterson in the 1950s, and was a member of the HAGS social club that sponsored many activities that benefited community programs in Patterson. She was also a president of the Parent-Teachers Association. She was born in New York City in 1913, and died after a long illness at the age of 45 on August 5, 1959.

Andre Lavielle continued to run Le Robinson after the death of his wife, and resided in one of the cottages with his stepson. An early morning fire destroyed Le Robinson in February, 1960. The fire was discovered shortly after midnight, and had already spread through the wooden structure. The blaze could be seen for ten miles. The house was unoccupied. The Patterson Fire Department was summoned, and ran hoses to the nearby pond, but had trouble directing the water on the fire as high winds diverted the spray from the hoses. The winds sent sparks in the direction of the cottages, but they did not catch fire. Patterson Supervisor William Millar had a brush with death when he stepped on a live electrical wire that had fallen on the ground. He warned firemen and spectators away from the wire until power could be cut. The property was purchased byt the town of Patterson for use as a park.

Among my father’s papers was this brochure, which gives an idea of what the resort looked like:

The boating pond with one of the beaches; in boat at left, Charles Martens who was a counselor there in 1957. 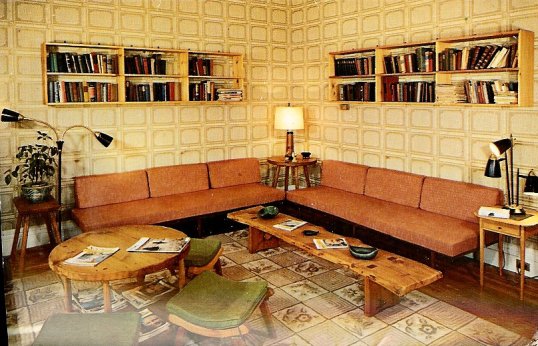 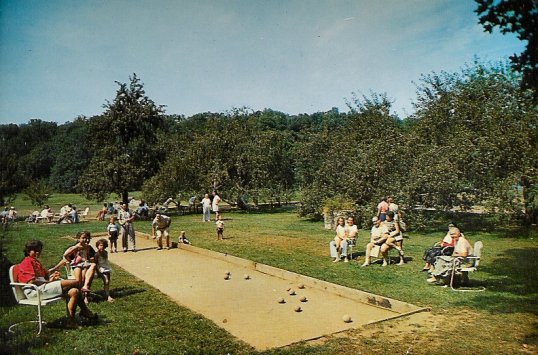 Bocce Court
On the extreme right are Jane Moskowitz and next to her Andre’s mother Angele who was visiting from France. In the back you can see Al Seymann and Nat Rothenberg. 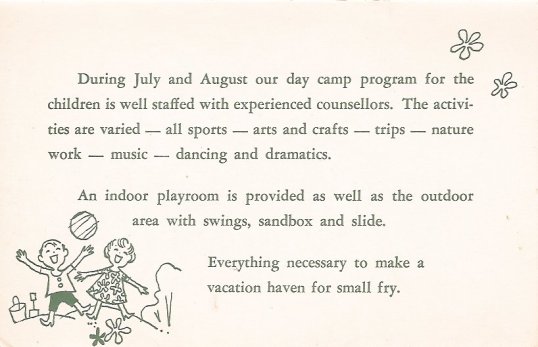 Today the property remains, but has been transformed into a memorial park for veterans. It has been well-cared for and is a pleasant and attractive place, still used by families in the neighborhood. 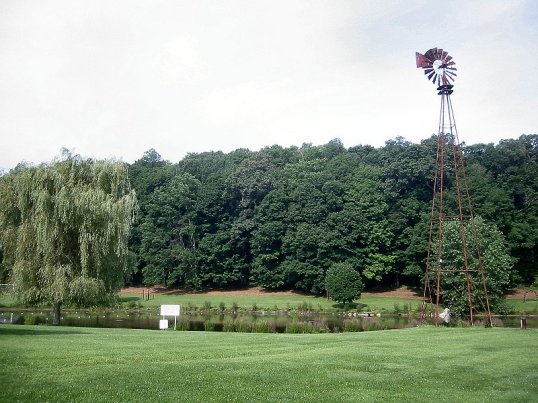