Despite the fact that in the last 21 years, computing power has increased by orders of magnitude from what it was in 1990, this article still makes some intriguing and valid points, and is reproduced here for your edification. 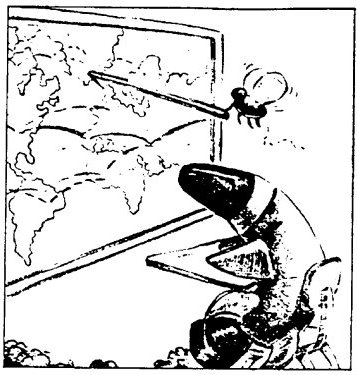 THE FLIGHT OF THE BEE WOLF

Compared to this humble insect, a cruise missile is downright stupid

Today, multiprocessor micro­computers handle hundreds of tasks at virtually the same time. Desktop workstations perform operations that are more complex than those performed by room-size main­frame computers five years ago-and they do it faster. We are using AI systems in real applications without expenditures of millions of dollars. It seems that we are entering the age of truly intelligent systems.

But consider the bee wolf. This seem­ingly insignificant creature is a bee­hunting fly that tunnels its single-occu­pancy home in beach sand. Even though hundreds of bee wolves have their tun­nels in the same area of a beach, each bee wolf will return to its own home and no other.

A biologist covered the opening of one bee wolf’s tunnel with sand to see what the insect would do when it returned and found no tunnel. Without hesitation, the bee wolf went to the location of its entry and began digging.

The biologist noted that each time the bee wolf left for a hunt, it would fly a pat­tern above its home before departing. The creature appeared to be memorizing landmarks. The biologist tested his theory (not to mention the bee wolf’s patience with biologists) by sketching the layout of pinecones around the entrance while the unsuspecting subject was at home. Soon the bee wolf emerged from the tunnel and flew its pattern before heading out in search of prey. Once the bee wolf had departed, the researcher moved the array of pinecones over about a half-meter.

When the bee wolf returned, it at­tempted to find its private cave at the cen­ter of the relocated pinecones. It dug in the sand for a second or two but found no tunnel.

Unlike members of our species, the bee wolf did not call its lawyer, psychia­trist, or parish priest. Instead, it realized that something was amiss and flew a higher pattern over the territory. From this new perspective, it was able to dis­card the erroneous references to pine­ cones and promptly located the true en­trance.

The first computer analogy to this rec­ognition and guidance problem is in a military application. The self-navigating cruise missile uses a system called ter­rain-contour matching (TERCOM). In­side the cruise missile’s guidance com­puter is a set of computer-encoded maps of checkpoints along the programmed flight plan. At these checkpoints, the TERCOM computer compares readings of a radar altimeter with a contour map stored in its memory. If the computer finds no match between the expected data and the real data, it searches for a match with the map of the surrounding area. Once the match is found, the com­puter adjusts the course of the missile to account forthe error.

To fool the cruise missile, you just move the target, leaving behind a dummy target. Because the cruise missile de­stroys itself in the process of destroying its target, it never can discover that it has made a mistake.

Even though the flight-control com­puter in the missile weighs less than 100 pounds, it has the equivalent of millions of transistors. Producing each of these computers costs a good part of a million dollars. In contrast, the bee wolf s brain, which is no bigger than the head of a pin, must carry on far more complex opera­tions than just finding its host’s way home. It must provide control to an aero­dynamically instable machine, its body. The bee wolf also can walk, dig, locate and outmaneuver its prey, and find a mate (a task that would be disastrous for a cruise missile). Compared to the bee wolf, the cruise missile is downright stupid.

Many people falsely place computers in a scale of intelligence well beyond that of the human mind. But even a person with severe learning disabilities per­forms far more complex mental opera­tions in a far shorter time than the largest and fastest computer. What size com­puter and program could control a walk­ing robot that could rise from a chair, put on a coat, go outside, walk around the building on rolling terrain, establish the location of the entrance from visual in­formation, and reenter the building-all this, while maintaining respiration, blood flow, and the input from millions of sensors for pressure, temperature, light, sound, and chemical analyses and production? Now consider the scope of the human brain. How much data is rep­resented by all the memories in just one human being? What complex relation­ship exists between memories to create knowledge?

Reprinted by the Old Wolf

3 responses to “The Flight of the Bee Wolf”