As discussed in my previous post,  once a “fact” has taken hold in the public’s mind, it will most likely live forever in some sectors of the general population.

One particularly egregious – and harmful – example is found in the Vaccination/Autism link, which has long been debunked but which continues to perpetuate itself. 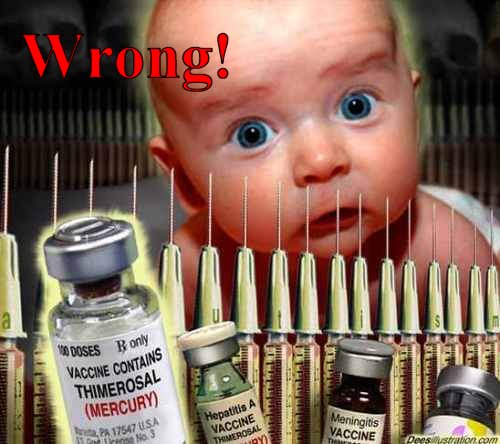 Executive Summary: There is no link between vaccinations (particularly thimerosal) and autism. The scare was created by a disreputable doctor, Andrew Wakefield, who was hired as a paid consultant by a law firm who looked to make money from suing vaccine manufacturers. The flawed study was published in Lancet, and later retracted.

It’s a shame that time and energy even needs to be spent on this nonsense.

Here are some links that are worth reading if you have any questions.

1) Journal of Pediatrics: “The Risk of Autism Is Not Increased by “Too Many Vaccines Too Soon“

“More than any other research, it was a study published in the British medical journal the Lancet in 1998 that helped foster the persisting notion that childhood vaccines can cause autism. On Feb. 2, that flawed study, led by gastroenterologist Dr. Andrew Wakefield, was officially retracted by the journal’s editors… Among other failures, Wakefield neglected to disclose that he was a paid adviser in legal cases involving families suing vaccine manufacturers for harm to their children.”

According to the Huffington Post, Wakefield was stripped of his right to practice medicine in Britain in May of 2010.

3) British Medical Journal: How the case against the MMR vaccine was fixed

In this brilliant and painstakingly documented investigative report, Brian Deer outlines step-by-step how the fraud was perpetuated, and by whom, and for what rea$on.

Do yourself a favor – get your kids vaccinated – failure to do so is resulting in an explosion of measles cases, and as many parents continue to refuse all vaccinations, a resurgence of previously rare diseases is a real possibility.

Edit: As of 2013, the reported number of cases of whooping cough has been declining since last year, but there is still an unacceptable jump in the numbers since 1990 or thereabouts.