A recent article at Bloomberg highlighted a situation that has long irked me. And I’m part of the problem, and I’m groping for answers. 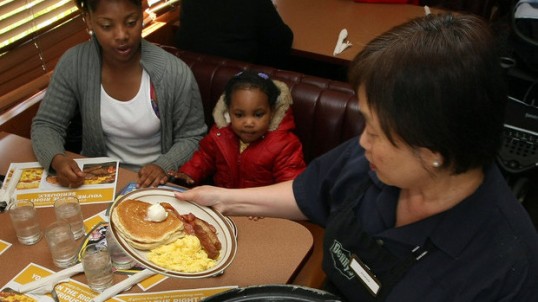 One thing about the Bloomberg article that I’d change is “waitresses” -> “servers.” Obviously the problem is industry-wide, and not limited to those who are y-chromosome-challenged.  But whatever. That’s a subject for a different  essay.

I’ve written about tipping before. For reasons outlined there, it’s not optional. If you eat out, be prepared to tip, and tip well. The people who bring you your food depend on it, as do numerous others in the restaurant who don’t get tipped directly.

So here’s what I struggle with. While states can set their own minimum wage numbers, New Mexico and 12 other states use the federal level, which hasn’t been raised in 22 years. And even states that have raised the minimum for tipped employees tend to err on the side of parsimony. That means “being cheap.” I happen to think that paying a server $2.13 an hour (I only made less than this back in the 60’s and 70’s, when the minimum wage in Utah was $1.65) is an abomination and an affront to ethical business.

See, tips were never designed to be part of a server’s base wage… it’s just that employers saw a gold mine and took advantage of it. Restaurant owners justify their actions by saying that servers are making at least minimum wage with tips included and often more, and while this can happen, it’s the exception rather than the rule. Raising the base minimum would “also spur firings and reduced hours as thin-margin businesses grapple with higher costs, say some restaurant owners and economists.” And therein lies the rub.

According to the Houston Chronicle, in an article dealing with operating margins in the restaurant industry:

These razor-thin margins are built on the base + tip model, and if restaurant owners are required to quadruple their waitstaff’s wages and still keep the same pricing structure, the business goes under – which means loss of jobs for people and loss of tax revenues for localities, neither of which is a good thing. There’s no way to balance the equation without changing some variables, and the only one I can see that can change is price.

As Americans, we have developed a sense of entitlement regarding cheap eats, either in restaurants (supported on the backs of the servers), or in the grocery store (supported on the backs of low-paid migrant workers.) Raising prices for dining and groceries to give a fair living to the people who provide them would be the right thing to do… but would go over like a lead balloon with much of the public and would be a logistical nightmare – push over that domino and the whole house of cards would come tumbling dow, to mix metaphors.

You can see why I’m conflicted. I like eating out. Boycotting restaurants to make owners pay a living wage is the worst kind of self-spiting solution, because it would simply force many eateries out of business. The problem is multifaceted, and there are better minds than mine working on addressing it. One of them is Gina L. Darnell, a former server who authors Wiser Waitress. Here’s her wish list.  It’s not too much to ask.

In the meantime, all I can do is try to make a dining experience as pleasant for my server as they are trying to make it for me… and leave a decent tip.