I remember back in 1979 when our firstborn came into the world, there was a lady who lived across the street who belonged to La Leche League. She was a nice lady, but we considered her a bit of a militant about breastfeeding. It turns out that people like her are still needed. For our part, thanks to their mother’s diligence, all of my kids were breastfed until age 1 (except my daughter, who at 9 months looked up at her mom, laughed, and refused to nurse any more, period the end thank you. You can imagine there was an uncomfortable week or so thereafter…)

It turns out that our society has a serious cognitive disconnect going on about breastfeeding – political cartoonist Horsey captured it perfectly in a 2012 offering:

Now comes Hollie McNish, mother, activist, poet, and thinker, who has posted (among others) a blistering damnation of people who shame breastfeeding women in public. I wish everyone in the world could listen to this piece and really, really understand what she’s saying.

The words of the poem are as follows (you’ll notice a little variance between the written text and what she delivered on the video; I happen to like the spoken version better, but you can decide for yourself.)

Embarrassed, by Hollie McNish
At first
I thought it was ok
I could understand their reasons
They said ‘There might be young children or a nervous man seeing’
this small piece of flesh that they weren’t quite expecting
so I whispered and tiptoed with nervous discretion.
But after six months of her life sat sitting on lids
Sipping on her milk nostrils sniffing up piss
Trying not to bang her head on toilet roll dispensers
I wonder whether these public loo feeds offend her?
Cos I’m getting tired of discretion and being ‘polite’ as my baby’s first sips are drowned drenched in shite,
I spent the first feeding months of her beautiful life
Feeling nervous and awkward and wanting everything right.
Surrounded by family until I stepped out the house
It took me eight weeks to get the confidence to go into town
Now the comments around me cut like a knife
As I rush into toilet cubicles feeling nothing like nice.
Because I’m giving her milk that’s not in a bottle
Wishing the cocaine generation white powder would topple
I see pyramid sales pitches across our green globe
and female breasts banned. Unless they’re out just for show.
And the more I go out, the more I can’t stand it,
I walk into town feel I’m surrounded by bandits
Cos in this country of billboards covered in ‘tits’
and family newsagents’ magazines full of it
Whsmith top shelves out for men – Why don’t you complain about them then?
In this country of billboards covered in ‘tits’
and family newsagents magazines full of it
Whsmith top shelves out for men, I’m getting embarrassed
In case a small flash of flesh might offend.
And I’m mot trying to ‘parade’ this, I don’t want to make a show
But when I’m told I’d be better just staying at home
And when another friend I know is thrown off a bus
And another woman told to get out the pub
Even my grandma said maybe I was ‘sexing it up’.
And I’m sure the milk makers love all this fuss
All the cussing and worry and looks of disgust
As another mother turns from nipples to powder
Ashamed or embarrassed by comments around her and
As I hold her head up and pull my cardy across and she sips on the liquor made by everyones God, I think
For God sake, Jesus drank it
So did Sidhartha, Muhammed and Moses and both of their fathers
Ganesh and Shiva and Brighid and Buddha and I’m sure they weren’t doing it sniffing up piss as their mothers sat embarassed on cold toilet lids
In a country of billboards covered in ‘tits’
In a country of low cut tops cleavage and skin
In a country of cloth bags and recycling bins and as I desperately try to take all of it in,
I hold her head up
I can’t get my head round
The anger towards us and not to the sounds
of lorries offloading formula milk
into countries where water runs dripping in filth
In towns where breasts are oasis of life
now dried up in two for one offers, enticed by labels and logos and gold standard rights
claiming ‘breastmilk is healthier powdered and white’
packaged and branded and sold at a price so that nothing is free in this money fuelled life.
Which is fine
If you need it or prefer and can afford to use bottles, where water is clean and bacteria boiled,
but in towns where they drown in pollution and sewage
bottled kids die and they knew that they’d do it
In families where pennies are savoured like sweets
We’re now paying for one thing that’s always been free
In villages empty of hospital beds
babies die, diarrhoea fuelled that breastmilk would end
So no more will I sit on these cold toilet lids
No matter how embarrassed I feel as she sips
Cos in this country of billboards covered in ‘tits’
I think I should try to get used to this.

I wrote this poem in a public toilet after my 6 month old baby fell asleep. I was in town on my own a lot with her and the first time I fed her someone commented that I should stay home. Baby’s need breastfed every 2-3 hours often. It’s impossible to run home. It’s a stupid argument anyway. But I was embarrassed and for 6 months took her into toilets when I was alone without the support of boyfriend, friends, mum etc. I hate that I did that but I was nervous, tired and felt awkward. And now I find it weird that our TVs, media etc never show breastfeeding in soaps, cartoons, anything. That we and the US are so bloody scared of it. It’s weird. I find our culture weird and even weirder, when people are so strapped for cash. It is costing parents a huge amount of money paying for something which most of us, those of us who are lucky enough for our bodies to do so, get for free. I have a lot of mates who complain they’re broke but stop breastfeeding cos they feel awkward, and pay for formula. Why are we paying billionaire companies for something our bodies produce for FREE. It’s really good marketing that we feel so wrong doing something like this I think. And it makes me sadder every day. Next we’ll be buying sweat in bottles from Tescos and rubbing it on our skin paying for electronic books to read nighttime stories. Oh, wait…

Huffington Post, in an article about Ms. McNish, also provides a list of places mothers have been shamed for breastfeeding, and the results: 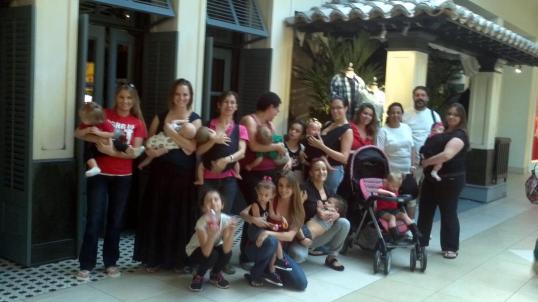 Brittany Warfield, a mother of three from Texas,was nursing her 7-month-old outside of a Hollister store in a Houston mall, she says a manager forced her to move. “He said, ‘You can’t do this here. This is not where you do that. You can’t do that on Hollister property. We don’t allow that.’ I said, ‘It’s Texas. I can breastfeed anywhere I like.’ He said, ‘Not at Hollister. Your stroller is blocking the way. You have to go,’” she recalls.

Mom and breastfeeding advocate Emma Kwasnicahad posted over 200 photos on Facebook of herself nursing her own three children and told the Huffington Post that her account has been suspended at least five times as a result.  She organized a nurse-in in front of Facebook headquarters to challenge the company’s policy that says photos depicting breastfeeding are “inappropriate.”

Houston mother Michelle Hickman says she was harassed and humiliated by Target staff when she found a quiet space in the store to breastfeed her infant. She organized an international “nurse-in” at several Target locations on Tuesday December 28th. Pictured above is mom who participated, Brittany Hinson and her 4-month-old son, Kennedy, in front of the Super Target store, in Webster, Texas.

Claire Jones-Hughes wrote: “After being verbally attacked for not covering up while feeding my four-month-old, I decided it was time to make a statement to show that mothers will no longer tolerate being harassed for feeding our babies in public.” She then staged a breastfeeding flash mob at the Clock Tower in Brighton, UK.

In A Government Building

Simone dos Santos was breastfeeding her four-month-old in the hallway of a D.C. government building when two female security guards told her to stop because it was indecent. “I was shocked, upset and angry that by providing food for my son, I was being treated like a criminal,” she wrote in a blog post for the Washington Post.

In November, Natalie Hegedus, a Michigan resident, was asked to leave a courtroom by a district judge. Her post on the community forum, BabyCenter, caused a national uproar.

This past June, a mom was harassed by a bus driver for breastfeeding on a Detroit-area bus. 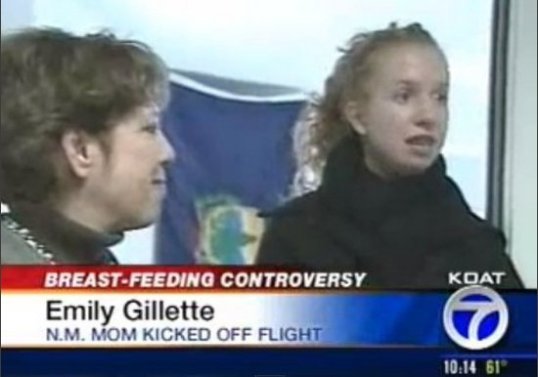 Back in 2006, 27-year-old mom, Emily Gillette, was removed from a Delta flight for breastfeeding. Watch a news clip about this story here.

Ohio mom Rhonda claimed that she was kicked out of her local mall for breastfeeding, back in February. Mall security even called for back-up.

We’ve heard about these incidents from coast to coast. In 2001, a mother nursing her 9-month-old was told to move away from the edge of the poolso as to avoid contaminating the water with her breast milk.

In Her Religious Community

One mom posted a frustrated essay in November 2006, detailing her pastor telling her that photos of her breastfeeding were equivalent to pornography. She and her husband decided to leave the church after this incident.

Clarissa Bradford was kicked out of a McDonald’s by an assistant manager for breastfeeding her 6-month-old child in August 2010.

It’s not hard to see the problem. To use a common meme,

It’s just wrong. Babies deserve the very best, but our society is conspiring to keep them from getting it. The purityrannical attitudes of small people in positions of power (sadly, including some women) discourage breastfeeding and prevent generation after generation of babies from getting the best possible start in life. And it has to stop.I applaud Ms. McNish and all the determined women who are pushing back against the tide. It will only be through their persistence that awareness will be raised and this bit of social folly will be done away.

Thanks to blogger inshadowz, a late-breaking addition. We’ve long known that Europeans have much fewer hangups about the human body than Americans; this image appeared some time ago in the restaurant of an IKEA in Norway:

It says, “Please use the sofa if you’d like to sit more comfortably while breastfeeding.” Hurra for Ikea!

Another relevant update: A blog post by Matt Walsh about Progressive Puritanism; and a cartoon recently found by blogger Inzhadowz and shared with me over at Facebook:

12 responses to “Hollie McNish, Poet Shamed By Breastfeeding In Public, Has The Last Word”