In 1959 or thereabouts, I was the proud possessor of a book called A Treasury of Laughs for Boys and Girls, edited by Joanna Strong and Tom B. Leonard, and published by Hart in 1948. I loved this book more than almost any other. As time went on, my copy was lost, and I mourned until I chanced to find in around 1990 (stuffed under the lowest shelf of the dirtiest used bookstore I have ever been in) another copy, which now occupies an honored place on my shelves.

One of the many pieces of wit and wisdom found in the book was the poem whose title graces this post. I reproduce it for you here – and I happened to think of it because of a verse in Lonnie Donegan’s song “Lively.”

OLD MAID AND THE BURGLAR

Oh, listen to the story of a burglar bold
Who broke into a house;
He opened the window and crept inside,
As silent as a mouse.

He hoped to get some swag;
He hoped to make a haul;
But if he’d known ’twas an old maid’s house,
He wouldn’t have had the gall.

At nine the skinny old maid came in;
“Oh, I’m so tired,” she said.
And thinking that all was quite all right,
She didn’t look under the bed.

She took out her teeth and her big glass eye,
And the hair from off her her head;
The burglar had a thousand fits
As he watched from under the bed!

From under the bed the burglar crept,
He was a total wreck.
The old maid wasn’t asleep at all;
She grabbed him by the neck.

She didn’t scream or holler or yell,
She was as calm as a clam;
And all she said was “Saints be praised!
At last I found a man!”

From under the pillow a pistol she took,
And to the burglar said,
“Young man, if you don’t marry me,
I’ll blow off the top of your head.” 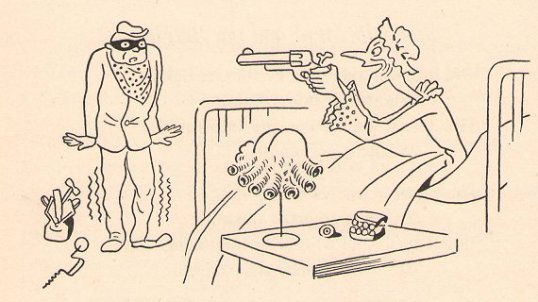 There are a number of versions of this poem around – another set of verses can be found at The Mudcat Cafe, and here is a version set to song by Ernest Stoneman and his Dixie Mountaineers:

Some hunting around at YouTube will find other versions still. I’m glad some of them have been preserved for future generations.

11 responses to “The Old Maid and the Burglar”