My wife has developed a contact dermatitis around her eyes. It makes her look like she’s got a bad sunburn under the area where a sleep mask would be, and it’s been getting worse for about a month. No idea yet what’s causing it. Her doc thought it was a fungal infection and gave her an antibiotic and a cream  to take, and things just got worse. (That’s why they call it a medical practice, you know? “Hmm, let’s try something else this time.”) Anyway, at least he wised up after the first visit and sent her to a dermatologist. He’s looking at it and saying “contact allergy,” scheduled a patch test for next week and put her on Desoximet 0.25%, a fairly strong topical cortisone cream. 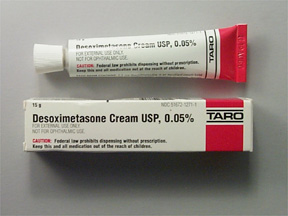 Now, pay attention – I have pretty good insurance as far as drugs go.

I’m of two minds about this.

First off, it took less than a day for this ointment to start bringing the inflammation under control, so It’s pretty effective. I’m not wild about cortisone in general, because it has some fairly ugly side effects when used over a long period of time – I have experience with eczema, and cortisone creams pretty much ruined the skin on my hands; my former partner is an independent Nurse Practitioner, and she’s seen some pretty grim results from long-term cortisone injections. That said, this stuff works and we’re hoping it’s a short term solution.

But Cushlamochree… how could a little bitty tube of mostly inactive base, about the size of a tube of Crest, cost that much? Yas, yas, I know – research, trials, development costs, marketing expenses, and yadda yadda ad infinitum, but I don’t see the justification. It seems all wrong. Thank Mogg’s Holy Grandmother that we don’t have to take Soliris™ at $409,500 per year, or any one of these other nightmare drugs. Prices like that are so wrong that philosophers weep at the thought… it’s just proof positive that our entire medical model is broken at its very foundation.

Like I said… I can’t complain too loudly because at the moment the Goodwoman of the House is getting some much-needed relief, but I think that’s the most expensive prescription I’ve ever encountered, and I’m pretty much gobsmacked.

One response to “Thank heaven one tube will do the trick…”