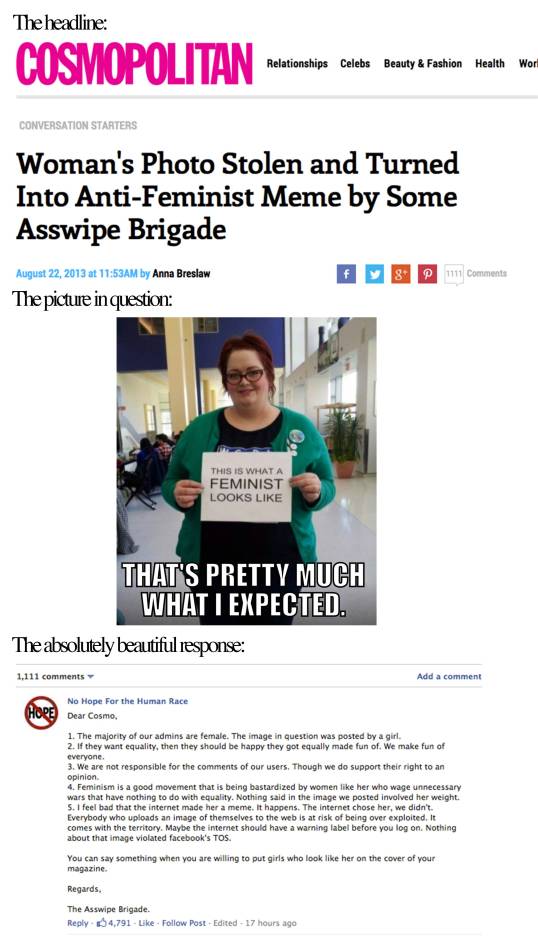 First and foremost, I want to echo Point #5 in the brilliant response above; posting the original image was less than sensitive. But if you step back and look at the larger picture, as satire goes, it’s pretty funny. The woman in question probably did not expect to be turned into an internet icon, but as was mentioned, anything that anyone posts on the Internet is fodder for being used, abused, and misused. It comes with the territory.

Second: I have long believed – and as a child of the 50’s I experienced the entire bra-burning, man-hating feminist frenzy of the subsequent two decades – that feminism from its earliest inception was hijacked by strident voices who understood very little of what equality is truly about. Their kind, along with other radical groups whose agenda was crystallized around putting the enemy down and making them pay for their oppression, have lost most of their cachet in the 21st century, and that’s a good thing. If racial and gender-based equality is to be obtained, it’s not going to happen by setting fire to the patriarchy or the white, Anglo-Saxon Protestant establishment – it will only be obtained by decent people everywhere speaking out against injustice and shining the harsh light of reason on ignorance and brutality. That’s what Reverend King was about. That’s what Gandhi was about – don’t set fires, don’t riot, don’t beat, don’t attack – but never accept injustice.

The war for equality in our society has not been won – in historical terms, the first shots have barely been fired. But the battle continues; people historically oppressed in all sectors of society, including minorities, the disabled, women, the GLBT community, and perhaps some I haven’t even thought of, continue to fight for one thing, and one thing only: the right to be treated the same as everyone else.

In an interview with Mike Wallace, Morgan Freeman summed up the ultimate end-state of equality in a very simple statement:

As long as we continue to use any adjectives to describe one another in purely social terms, in a way that erects that intrinsically-desired barrier between “us” and “them” – adjectives like female, male, gay, Christian, Muslim, obese, disabled, black, white, and a dictionary full of others, we as occupants of this island earth are guilty of racism, sexism, and every “-ism” you care to name. We have missed the boat, and have not reached the finish line. It is my hope that someday, humanity will get there. We are, in the end, all members of the same race and species: the human race.

Lastly, as was beautifully pointed out in the response to Cosmo’s snark above, that particular magazine is among the last on earth to make any judgments about feminism. In my opinion, it is one of the most sexist, demeaning, exclusionary, debasing, and offensive publications on the newsstands… and somehow it’s popularity continues to fly high.

Which only reinforces my thesis – we may be making progress, but we have a long, long way to go.  But as daunting as the struggle may seem, we can never, ever, ever give up.

6 responses to “So who’s the biggest jerk? (Feminism Department)”