15 years ago, Scott Adams was making fun of business buzzwords.

In fact, something called “buzzword bingo” became a thing for a while, at least before managers caught on to the fact that they were being mercilessly mocked in meetings:

Here’s an example of a typical bingo card:

Rank and file employees, who are less concerned with leveraging proof of concept paradigm shifts than with trying to get their daily work done have long realized that management’s core task is to look impressive to the next level of management; the following chart has been in my files since the late 70’s: 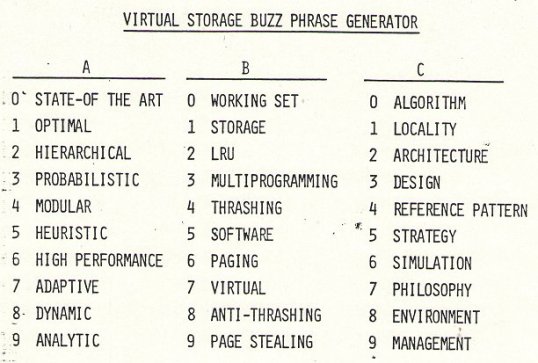 Imagine, then, my dismay to find out that this phenomenon has infiltrated the world of education. A recent article at Slate, “Parents Left Behind: How public school reforms are turning American parents into dummies,” takes a hard look at this phenomenon.

“Then my friend Duncan helpfully explained that he was as confused as I was about the pedagogical objectives and aims of his child’s public elementary school in rural North Carolina. Until he realized that the school had seamlessly adapted Stephen Covey’s The 7 Habits of Successful People into its curriculum, and his first grader started accusing him of failing to be sufficiently “proactive.” Last year I was grappling with rationalizing my son’s fractions. Suddenly I am also failing to employ proactive strategically dynamic new paradigms as well.

I have nothing against Covey personally, but his writings – along with those a plethora of other one-minute-manager types – have been adopted by bureaucracies and executive food chains nationwide in a frantic attempt to boost the bottom line, not realizing that giving a 5¢ item a $10.00 name doesn’t change the nature of the beast. Jennifer understood this all too well and saved herself from a career of servitude in the worst of all possible companies:

Only marketing departments have failed to grasp the essential truth that buzzwords are a sham, and an excuse for not obtaining actual results:

The important thing to remember is that results are often harsh, but always fair. If schools are focusing on finding new ways of describing “teaching,” which is what they should be doing, then they are spending needless time and effort on one-off tasks, and the quality of their results will suffer.

I want to see schools do the following, at a bare minimum:

Make no mistake – in order for our schools to become effective at teaching again, instead of administering, the entire system will need to be overhauled. That means taking a good hard look at the power vested in teacher’s unions. I have nothing against unions themselves – my parents were proud members of AFTRA and SAG – but if a union has shifted its goal from ensuring fair treatment to the preservation of all jobs at any cost, it has missed its mark and needs to be reformed.

If you want to amaze your education colleagues, you can wax eloquent about disintermediating mastery-focused learning; if you want to turn out well-rounded, well-educated students, you can get away from the bureaucratic camel-ejecta and simply teach your kids, looking at them as distinct individuals instead of statistics on a performance chart which will determine next year’s funding.

[1] This quote has been attributed to Kenneth Dunn, Kenneth and his wife Rita, Robert Buck, and a number of others. Regardless of who said it, I consider it valid.

2 responses to “Are you triangulating mission-critical units?”