Back in the days of the PalmOS, I became enamored with a little time-waster called “Bejeweled.” Apparently I was late to the party, because PopCap had introduced the game long before the Palm became popular. 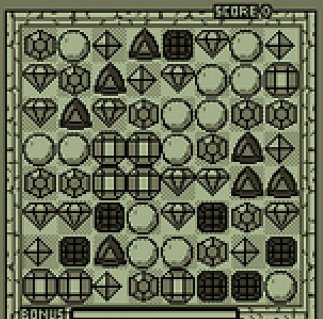 Since then, I’ve played both PC versions and online versions, and this last year they introduced “Bejeweled Blitz” for the Android platform. I decided to try it about 5 weeks ago.

Today I looked at my stats, and added up the number of games I had played based on how many scores at various levels I had achieved. Turns out it was close to 1500. At a minute apiece, that’s around 25 hours of frantic gem-swapping.

Every choice has prices and benefits; it was amusing and fun, but I realized that I could throw away weeks of my life if I followed this game to its logical conclusion, and – as I did with Angry Birds – I decided it was time to delete it.

I’m not sure what makes this game so attractive, but the first thing I recognize about myself is that I have an addictive personality. If I get hooked on something, it’s very hard to quit. And PopCap (or EA, if you prefer) makes this game very hard to let go of.  They employ multiple strategies to keep you playing.

The basic play is addictive enough – find groups of 3, 4, or 5 jewels that match and slide them around to create a row. They disappear, and others take their place. Very similar to Tetris in that regard. But then things get more complicated. Matching more than one combination can result in gems that explode, doing damage to the surrounding area, or gems that take out two intersecting rows; matching 5 gems in a row will give you a special cube that will explode all gems of whatever color you swap with. 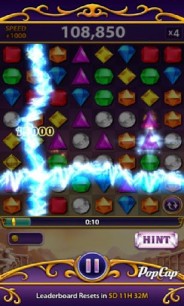 The “hypercube” taking out all purple gems.

As you play, you earn “coins” depending on the complexity of patterns matched and subsequent combinations that are unleashed by falling jewels. Of course, each “coin” is actually worth 100 coins, so your store increases more rapidly. For downloading the game, they start you out with 100,000 “free” coins. (That sounds like a lot, but as I mentioned below, it’s enough to activate the Phoenix Pyramid once.)

But as you play, you discover that you get awards for various point levels, from 25,000 all the way up to 500,000… and it’s really hard to achieve those higher levels without buying “boosts” – seen in the first image above. Each of those cost coins, and are good for 3 games only. But using them can be fun, because you can set off all sorts of additional explosions, earn point multipliers more quickly, and hope for a big finish with the “last hurrah,” when any bonuses or unused combinations left on the board explodes and gives you more points and more coins. If you swap gems fast enough, you can earn “blazing speed,” which doubles the reaction time of the game for 8 seconds.

Every now and then, the game offers you a “rare” (there’s the scarcity principle at work) special gem for a certain price: 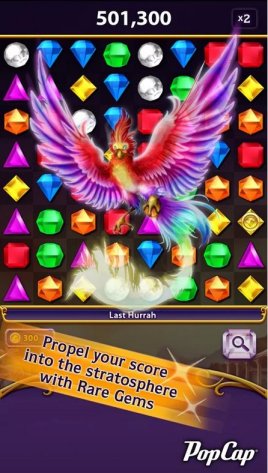 The Phoenix Crystal, Cat’s Eye gem (which, for some strange reason, stopped appearing for me over the last two weeks), the Blazing Steed, the Moon Crystal, and the Kanga Ruby all have different effects, and cost between 15,000 and 75,000 coins to purchase – single game use only. But they can have some powerful effects in terms of score and coins earned, and in combination with other boosts, they can elevate your tally to serious levels – my all-time high was 642,550.

If that weren’t enough, there are more hooks for the competitive: (Sorry for the lousy screen caps, apparently these don’t save well on the Android)

Your “Stats” screen shows your all-time high score, and various star awards, depending on how many times you have achieved a certain score. My top three are maxed out. It also shows your rank – I made it to “emerald hunter,” which is only 37 out of a total 135 ranks!

If you’re not happy competing against yourself, they post a bogus “leader board” which gets reset every week or so – pitting you against non-existent players like “Zuma Frog” and “Cat Tut.” Most insidious of all, they encourage you to play with friends on Facebook, thus sharing the madness and – at the same time – harvesting all of your friends’ information. This is one option I declined, as I hate getting invitations to things like Farmville, Mafia Wars, and Candy Crush Saga.

Last, but definitely not least, you can buy coins for real cash – anywhere from $1.99 for 100,000, all the way to (Best Deal!) 9,300,000 for $99.99. Yes, folks, for the low, low price of only a single Benjamin you can buy enough coins to boost yourself to stardom. And of course, for EA games, that’s the whole point. They want to monetize this baby, and if you play but don’t pay, they can’t develop new stuff to keep your little fingers busy. That’s the American Way that Superman spent all those years defending.

If I wanted to achieve the rank of Ruby Regent and max out all my stars, I’d be playing this game until Kingdom Come (which, if certain Facebook posts are to be believed, is JUST AROUND THE CORNER!!!11!!)

But like I said, having wasted a day of my life (and probably a bit more, allowing for games that were not up to the 25,000 point cutoff), I decided that enough was enough. It was fun while it lasted, but I need to make sure that my time is spent doing more worthwhile things. As I’m starting a new job next week, my free time will be limited, and I want as much bang for my buck as I can get.

5 responses to “A day of my life is quite enough.”