I’ve posted numerous times about health-related scams and sleazy marketing. For this reason, I have no small sense of irony spending time as a temp worker for a local nutraceutical company that serves many herbal and health-food concerns. Today I spent 8 hours helping to package about a million capsules of… wait for it… garcinia cambogia.

Temp work is fine, I guess. It’s pretty mindless work, although it can be physically demanding, and it provides some income where there would otherwise be none. But as one works, one’s mind drifts to the customers who will be buying this stuff at grossly inflated prices, thinking that this is the magic bullet to help them lose weight; it’s not, and they won’t. They’re just throwing money away on a powdered fruit product of dubious value.

From “Lucky Luke 18 – In the Shadow of the Derricks” 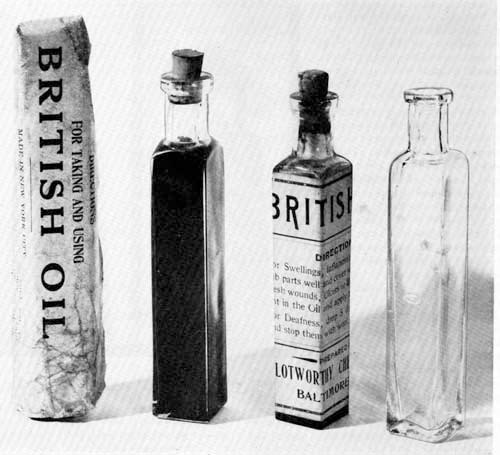 Competition was also lively in the 1740’s among some half a dozen proprietors marketing a form of crude petroleum under the name of British Oil. Early in the decade Michael and Thomas Betton were granted a patent for “An Oyl extracted from a Flinty Rock for the Cure of Rheumatick and Scorbutick and other Cases.” The source of the oil, according to their specifications, was rock lying just above the coal in mines, and this rock was pulverized and heated in a furnace to extract all the precious healing oil. (Old English Patent Medicines in America, George B. Griffenhagen and James Harvey Young. Found at the Gutenberg Project.)

Snake-oil salesmen have been around since the dawn of time. Sometimes they took the guise of shamans or medicine men – now they’re just con men and marketing specialists. Now, don’t get me wrong – I am a proponent of optimal nutrition including an adequate intake of vitamins, minerals, antioxidants and co-factors, and there is a significant body of peer-reviewed science that documents beneficial effects from many natural sources: fruits, vegetables, plants, herbs, chemicals (think of aspirin), and so on. I have nothing against natural remedies, especially when there is adequate proof to show that they are effective. What rubs me the wrong way more than anything are the outrageous claims touted by advertorials and infomercials, picked up on by celebrities such as Oprah and Dr. Oz, and marketed in multiple millions of dollars to the gullible proletariat.

The nutritional industry is a trillion-dollar scam waiting to happen, and very little of what is sold imparts benefit commensurate with price paid. Add to that the fact that the landscape is so unregulated that one can claim almost anything as long as you include the standard disclaimer that your product is not intended to cure, prevent, diagnose or treat any disease, and that your claims are not approved by the FDA. That makes nutritional labeling similar to the CAN-SPAM act… you can get away with selling the moon as long as you word it right.

From their web page:

——–
If this stuff boosts energy levels, it does so because of the natural sugars contained in the fruit blend, which is hardly novel; but I especially love the “in some manner,” which conjures up visions of handwavium and unobtainium. Don’t ask questions, it just works. Remember that Chinese medicine has largely been marketed to a Chinese population, a large percentage of whom are essentially ignorant of modern scientific realities. Were it not so, the rhinoceros would not be an endangered species today.

In Bernard Read’s translation of the 1597 Chinese materia medica “Pen Ts’ao Kang Mu”, the complete section on rhinoceros horn (“the best is from a freshly killed male animal”) reads as follows, with no mention of any aphrodisiac qualities:

“It should not be taken by pregnant women; it will kill the foetus. As an antidote to poisons (in Europe it was said to fall to pieces if poison were poured into it). To cure devil possession and keep away all evil spirits and miasmas. For gelsemium [jasmine] and snake poisoning. To remove hallucinations and bewitching nightmares. Continuous administration lightens the body and makes one very robust. For typhoid, headache, and feverish colds. For carbuncles and boils full of pus. For intermittent fevers with delirium. To expel fear and anxiety, to calm the liver and clear the vision. It is a sedative to the viscera, a tonic, antipyretic. It dissolves phlegm. It is an antidote to the evil miasma of hill streams. For infantile convulsions and dysentery. Ashed and taken with water to treat violent vomiting, food poisoning, and overdosage of poisonous drugs. For arthritis, melancholia, loss of the voice. Ground up into a paste with water it is given for hematemesis [throat hemorrhage], epistaxis [nosebleeds], rectal bleeding, heavy smallpox, etc. (Found at Save the Rhino)

But how is Galaxy juice being represented to their sales force, and hence by the sales force to potential customers? As an anti-cancer agent. Now, if US reps don’t want to run afoul of the FDA, they won’t say anything about that in a direct manner, but have a look at some of the slides from their own inspirational Powerpoint presentation: 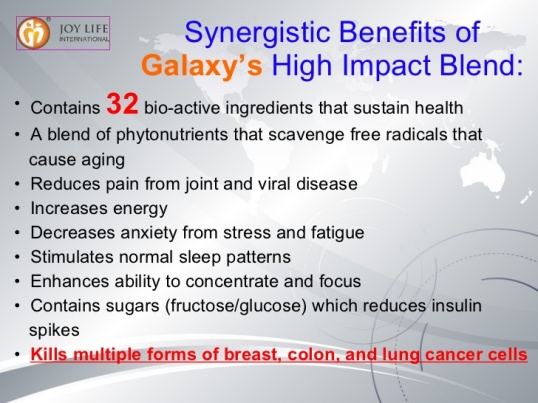 Joy Life found a willing scientist, gave him a research grant, and wildly extrapolated his results. And a bottle of this fruit/grain concoction sells for $130.00 in China. Is it worthless? Well, looking at the ingredients, it’s probably a good source of antioxidants, but it won’t cure cancer, and it’s hardly worth the end-user price. Let it also be mentioned that Joy Life sells a few other things in the USA that are highly questionable, including:

Things of this nature fall directly into the quackery zone, and I’m astonished that they can get away with marketing this sort of garbage.

Fortunately for me, I won’t be working at this particular outlet much longer; another opportunity has come up which strikes me as being much more upstanding and worthwhile. But the size and scope of the former enterprise made me realize once again that the business of separating people from their hard-earned cash often has very little to do with providing honest value in return.