I have long loved and respected the work of Art Spiegelman, author of Maus and Maus II, two graphic novels which autobiographically recount the experiences of his father Vladek through World War II and the years previous.

One thing in his account puzzled me, though – the exchange recounted in the panels below, just after Vladek arrives at Auschwitz. 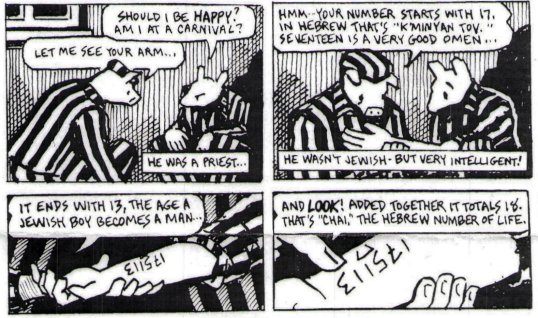 I had no idea why the priest said that 17 in Hebrew was “kminyan tov,” because seventeen is “shiv’a ‘asar.” The internet didn’t help, because every reference to “k’minyan tov” led back to Spiegelman’s work. I was stumped. It turns out I just didn’t know enough about Hebrew or kabbalistic customs.

After letting the matter rest for about five years, during which interval I began a study of modern Hebrew, I returned to it with a vengeance and did some more digging.

The Polish priest was learned in the ways of gematria, or the mystical assignment of numerical values to Hebrew letters, and divining meaning from how words add up; I first became aware of gematria when I read The Chosen by Chaim Potok.

I was coming at my puzzle all wrong, assuming that minyan was referring to the quorum of ten Jewish male adults required for certain religious obligations. The word itself also means “count,” with “k’minyan” meaning “like the count of.” That expression appears to be used almost exclusively in referring to values in gematria. Look at this post in a forum:

This entire sentence is far over my head in terms of understanding the context, but to have found the expression in an external source was significant. It seems then that this phrase can be read “like the count of ____”, whatever number is being referred to.

Thus the priest reads Vladek’s number (175113) and notes that the first two numbers are 17 – with “טוב” (tov, meaning “good”) being the numbers 9+ 6+ 2 (each Hebrew letter is assigned a value corresponding to its position in the alphabet). Hence “tov” has the value 17; “k’minyan tov” can be interpreted in this case as “like the count of ‘good’.) This would be seen as a good omen. Another interpretation I found indicates that 17 would indicate the 10 men necessary for a minyan, plus seven more, making it a “good minyan” or a “strong prayer group.”  I can’t speak to the accuracy of this interpretation, but it’s interesting nonetheless – this was the first thing that occurred to me, and it didn’t make sense. Now it does. Sorta.

Vladek’s priest friend notices that 1+7+5+1+1+3 equal 18, and the Hebrew word for “life” (חי – chai) is composed of the numbers 10 + 8, or 18, the number referred to in the quote above, which could be read as “like the count of ‘life’.” And this was sufficient for Vladek to express the feeling that he had been given another life. Vladek escaped, and the priest was never seen again.

I don’t think I have the intellectual discipline to pursue this any farther, but my curiosity has been silenced. At least I understand the basic meaning of what Spiegelman was relating in this scene, and that will have to do.