Today’s Google Doodle includes an electronic, interactive Rubik’s cube for visitors to solve. It hardly seems possible that 40 years have passed since Hungarian sculptor and architect Ernő Rubik invented his amazing Rubik’s Cube. Part of this may be because it didn’t really become popular in the USA until after 1980. I remember being fascinated by this contraption, and became fairly proficient at one method of solving it. At least I could get it back into shape. I later acquired a whole slew of related puzzles – a 4×4 cube, a smaller “pocket” 2×2 cube, a Pyramid, Alexander’s Star, and many others. Decades have now passed, I’ve forgotten how to solve these quickly, although solutions exist on the internet, and most of the puzzles have been sold off or given to other owners. 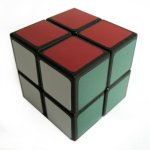 Rubik’s Shells. This devilish contraption involved getting all the balls of one color into their proper hemisphere. If that weren’t hard enough, once you had solved the first level, you could press a button on one side of each shell which locked half of it (and the button was impossible to release, so once it was down, it was down forever.) This made the puzzle orders of magnitude more difficult. I was never able to solve the easiest level.

More variations of this puzzle have been manufactured than I can count. Some of them are devilish beyond imagination.

I have (and have had) a few others, not necessarily Rubik-inspired but intriguing just the same.

This one, made by Mag-Nif, is called “The Brain.” The object is to get all eight ears sticking out (or brought back in). It looks virtually impossible as you play with it, but all you have to do is count upward in Binary, with each tab representing a position in the binary string 00000000. The image above represents 00000001. Once you get the hang of the sequence, you can do it behind your back (I’ve done it.)

The above abomination is a version (mine is slightly different) of the nine linked rings puzzle (jiulianhuan or 九连环)—also called “Chinese rings”. It also works in a somewhat binary fashion, with the object being to get the wand off of the chain of rings. In order to work the puzzle, you need to work the wand up and down the ladder in a sequence reminiscent of the word puzzle involving a farmer with a boat who wants to get a fox, a goose, and some grain across the river, but the boat will only hold two things. Again, once the sequence is determined, it becomes a fairly brainless procedure, but it’s maddening if you don’t know how it works.

This one is called “Luminations,” and it’s not available any longer except on eBay and other such places. It has four start positions, depending on which vertex is pointing up when the beast is turned on, each one more difficult than the last. the object is to get all four vertices glowing red; every time you rotate the puzzle, the vertices change color in a set pattern from off, to green, to yellow, to red. It’s one of my favorites.

I’ve had so many similar puzzles over time, and they were wonderful time-wasters (and brain teasers) during an age when the Internet was not available. That, and books, were my time-sinks. As I said, many of these puzzles have now found new homes, but I still pull out the ones I have occasionally and see if I can remember how to work them. Rubik was a master, and his puzzles have entertained many a mind for many an hour.

But before Rubik, there was Piet Hein, author of the famous/infamous “Grooks,” and he invented Soma Cubes. These were, in their own way, just as clever – my father had a couple of sets of these that he had made himself, and I recall spending hours playing with them.

According to Wikipedia, Hein invented these cubes while listening to a lecture on quantum mechanics by Heisenberg. I should have such a mind. Most of the Wiki article is beyond me; I can conjugate Latin verbs far more easily than I can comprehend mathematical stuff. But I remember my father’s sets, so I was reminded of them as I thought about puzzles.