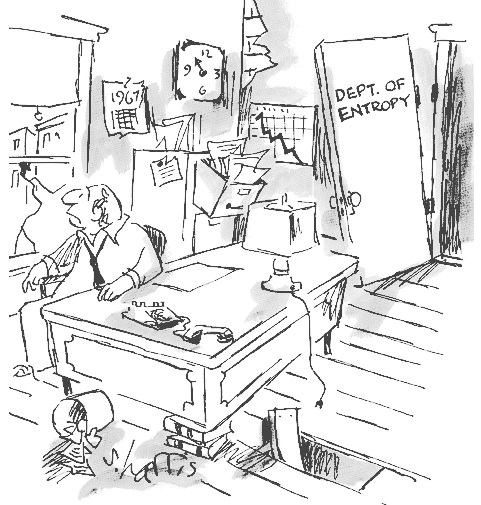 Good question; and here’s a lovely answer by a redditor, /u/api.

The second law of thermodynamics, which basically says that energy is determinedly lazy. It would much rather dissipate itself as heat and go play with all the other free energy. Yay!

Take solar for example. When sunlight strikes the Earth you get heat and very little work, maybe moving some air around. Damn lazy energy. Picture it this way. Imagine a bunch of rocks sitting around on a flat desert playa. The sunlight striking them provides enough power to move them around. But it doesn’t happen. Despite how cool it would be if rocks ran around on their own, all that energy would rather just goof off. That’s the second law in a nutshell. It’s why most of the universe is boring.

Life disagrees, which places life — including ourselves and our extended phenotype of gadgetry — at stubborn odds to the second law. Living systems are nature’s slave drivers, grabbing free energy and trying to coax it into doing work with all kinds of contraptions like chlorophyll and PV cells and wind turbines. The definition of work is more or less “something statistically unlikely to happen by chance.”

Storing energy is hard for the same basic reason as catching it.

Let’s say you put out a PV panel. There’s a wire dangling from it. Stick it to your tongue. Ouch! Ok, no, don’t do that, most large PV panels produce about 200W and you’ll talk funny for a while. But the point is you’ve managed to catch some energy there, and to force it down a wire as a nice, neat, low entropy single file line of electrons. Now what?

You could use it right then and there, which is your most efficient option. You’ve already got it after all. But unfortunately you might want to  write your great work of literature while the sun is down.

To store energy you’ve got to take energy and use it to coax some material substrate into doing something statical-mechanically very unlikely. How likely is it for megatons of water to spontaneously flow uphill? Not very. How about all the ions in a lithium cell spontaneously migrating to the same side of a gradient? Every rechargeable battery is basically Maxwell’s Demon: https://en.wikipedia.org/wiki/Maxwell%27s_demon

Think of it as herding cats at the molecular or quantum scale. You’ve got to grab every little molecule or atom or ion and say “you! go there!” All this cat herding gives ample opportunity for more of your precious energy (it’s lazy, remember?) to slip the yoke and migrate off as heat. Feel your battery while it charges. It gets warm.

We don’t love fossil fuels because they give us energy. Free energy falls from the sky, and while it’s hard to grab there’s quite a bit of it around. Do the math on how much solar energy falls on a square mile in a day and how much gasoline that translates into. It’s a lot. We love fossil fuels because they give us energy already stored in a very low entropy form that allows us to release it on demand. Too bad we don’t have an infinite supply of the stuff. We’ve gotten pretty good at using energy when we have it. Now we have to get good at storing it before we run out of carbon goop.

That and/or we have to figure out how to unlock the power stored in the atom without the problem of the power plants occasionally blowing up. Atomic energy is fossil fuel too, but it’s fossil fuel left over from cosmic events like supernovae and contains enough stored energy to power our little civilization for a very long time.

I recommend perusing the rest of the thread – there’s a lot of discussion on ancillary questions such as the prices/benefits of nuclear power.

We just need to keep working on the question. Fossil fuels are limited and filthy, and some day we’re either going to run completely out or have a nest so fouled that no one can live here.