Pompeii was an interesting movie. I can see why the critics trashed it; the acting was not spectacular and there was way too much overblown drama and not much more than a sappy, derivative plot. That said: I lived in Naples for around 18 months, right under the shadow of Vesuvio. I spent many hours wandering the byways of both Pompeii and Herculaneum, trying to imagine what life was like there, and what the catastrophe must have been like. Seeing those ash-cast sculptures that used to be real, live people in the museum is terribly haunting; the CG representation of the eruption and its (possible) effects on the city was chilling in the extreme, because however it looked, it would have been terrifying. 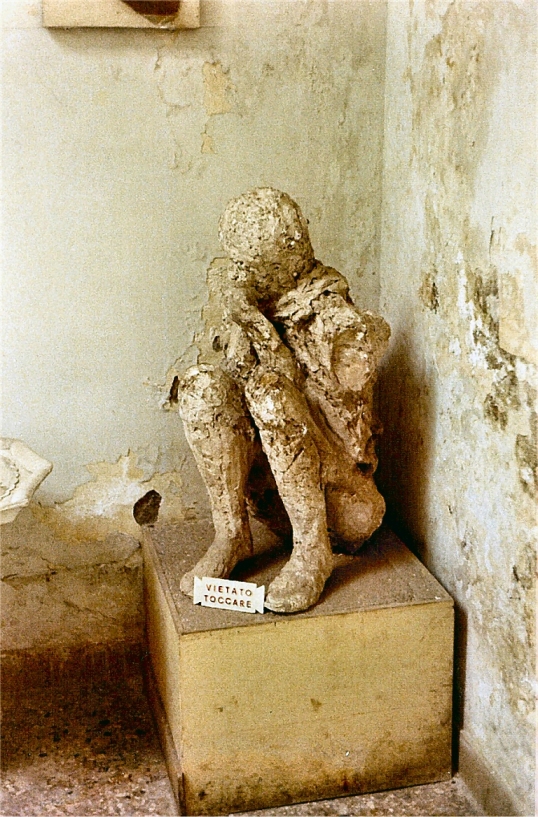 Ash cast of a victim.

A very rare day of snow in a Pompeiian courtyard. 1970

The ruins of Pompeii with suburbs of modern-day Naples between it and Vesuvius. It is to be noted that if the mountain ever decides to get its rocks off again, the result could be more catastrophic than the eruption of 79 AD.

In the plus column: Jared Harris, with whom I fell in love as David Robert Jones and Moriarty; he’s always a pleasure to watch. I thought the development of the relationship between Milo and Atticus was one of the more satisfying parts of the film; I’d give it 4 stars out of 10 overall.

2 responses to “Pompeii: The Movie”