Apparently, shelf-safe milk (the link is a plug for Tetra Pak) has been a thing since the 1960s, thanks to high-power pasteurization (ultra-high-temperature) and packaging technology.

I first learned about this phenomenon while living in Austria in the 70s, where they called it Haltbarmilch (storable milk). 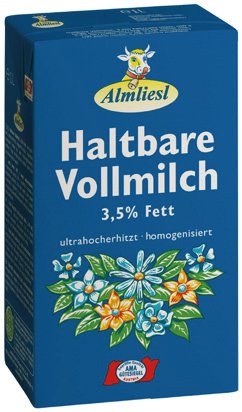 It had a slightly different taste when warm, but when refrigerated it’s hard to tell the difference, and this technology allows milk to be used in countries where refrigeration and storage is difficult.

It’s not unknown here in the US either:

I’ve kept a few of these in my pantry at times for those odd occasions when we happened to run out, and it’s more than acceptable. You can still buy it at places like WalMart; unfortunately, Parmalat had some financial difficulties, but is still alive and kicking.

Speaking of milk, I recall one of my oddest encounters was in Italy in the 60s, when milk was distributed in tetra paks (the Tetra Pak company is named after these oddly-shaped cartons, developed by Erik Wallenberg, even though the packaging itself is no longer popular.)

I’m not sure why these were so popular, but they were. And Italian milk tasted really odd to an American palate, but I got used to it and occasionally miss the flavor.

Again, these were also used in other countries, but I don’t ever recall encountering one here, even in my childhood.

Milk: It does a body good.