I love Asian foods; Chinese, Japanese, Burmese, Thai, you name it. And with many cuisines (but not all… not all…) soy sauce is either an ingredient or provided table-side as a condiment. 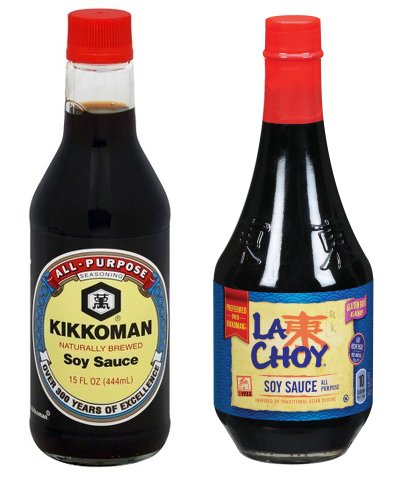 Long before I did any research at all, I knew that there was a stark difference between the two major brands that are commonly known in America: Kikkoman and LaChoy.

The first, my preferred sauce in the kitchen, is a Japanese-type sauce, brewed in the traditional manner over a period of six months (although traditional Japanese soy sauce can take 18 months to make, or much longer):

Fermenting soy beans and wheat at the Kikkoman factory in Wisconsin – from the July 1987 National Geographic article, “The Prodigious Soybean.”

The second is what’s known as a “chemical soy sauce.” From an article at Serious Eats by Jenny Lee-Adrian:

Chemical soy sauces: These are made over the course of about two days by hydrolyzing soy protein and combining it with other flavorings. Their flavor is far removed from traditional soy sauces made with fermented soybeans.

Harold McGee explains the process in On Food and Cooking by saying:

Nowadays, defatted soy meal, the residue of soybean oil production, is broken down—hydrolyzed—into amino acids and sugars with concentrated hydrochloric acid. This caustic mixture is then neutralized with alkaline sodium carbonate, and flavored and colored with corn syrup, caramel, water, and salt.

LaChoy is popular, but it’s pretty much in harmony with their old jingle ¹- “LaChoy makes Chinese food… swing American.” It’s what you’d expect to pour on a can of their store-bought Chow Mein. I’ve never seen it in a Japanese restaurant anywhere, they either use Kikkoman or one of the many national brands available now – even in traditional grocery stores. Somehow it just tastes… wrong. But as in all things, that’s just my opinion – and your mileage may vary.

National Geographic also has a lovely 5 minute video on how soy sauce is made in the town of Yuasa, Japan.

Another article at Yum of China by Tiana Matson lists some of her favorite sauces, most of which could probably be found at your local oriental grocery store if you’re fortunate enough to live close to one.

A lot of local Chinese places here in Maine provide little packages of “soy sauce” (those scare quotes are there for a reason) made by Kari-Out Co. If you want brown salt water with hardly a hint of anything else – think LaChoy cut to homeopathic levels – by all means feel free to use it.

As for me and my house,

¹ And, if you’re old like me, you might recognize the ubiquitous voice-over tones of Mason Adams (“With a name like Smucker’s, it’s got to be good!”) who was a friend of my mother back in the day.

One response to “Not all Soy Sauces are Created Equal”