The sad news has arrived that Buckyballs and Buckycubes will be no more. 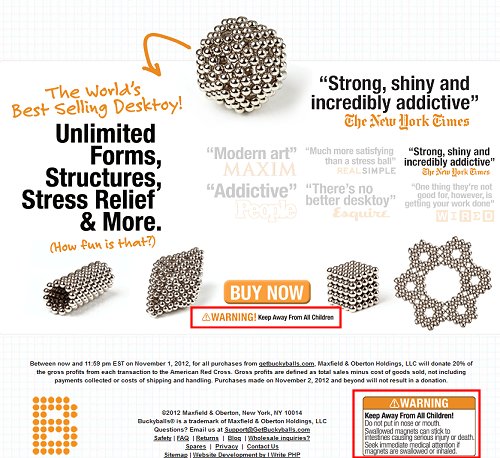 Thanks to the wise attorneys at the Consumer Products Safety Commission and their relentless thirst for billable hours, the makers have thrown in the towel, and will not be making any more of these amazing and entertaining devices. Glad I got me a set when the getting was good. If you want some, head over to their website and order now before this little bit of history is gone.

Yes, these are not for children. Yes, the warnings on their website and packaging and instructions are loud and brash. And yes, there have been some injuries requiring surgery as adults have ignored the warnings. Yet, somehow, the following things continue to be sold:

and a whole host of other things that, given to a child, could be wildly dangerous or fatal.

I remember another toy that vanished early on – click-clack balls. 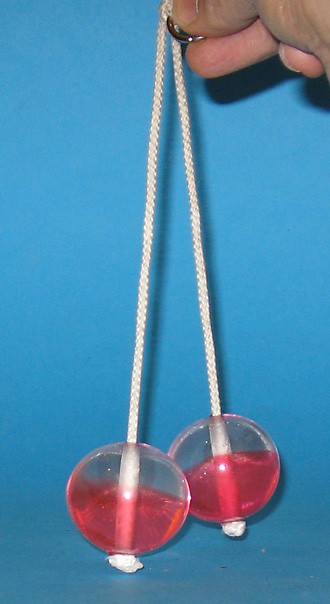 Sort of a 20th-century version of the old paddleball toy, these could be both entertaining (because it was devilishly hard to get them going) and maddening (because of the noise.) Unfortunately, if you didn’t do it right, those hard little glass balls could whip around and give you a good solid whack on your wrist, or pinch your fingers. Worse, if you got them going hard enough and long enough, they could shatter with the surprising effect of a fragmentation grenade. The video below shows them in action:

Later versions were made of rubber or plastic, but as far as I know they are still banned here. 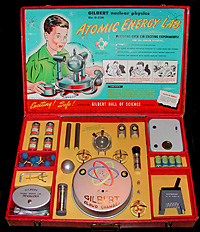 which allowed young people to operate their very own cloud chamber, or lawn darts

which allowed people of all ages to put each other’s eyes out and perforate various body parts.

So the question is raised, where do you draw the line?

Common sense would dictate that when something is marketed as a toy and targeted at children, if it causes bodily injury from normal use (lawn darts racked up over 7,000 incidents), it’s probably not a good idea. But if something is marketed as destined for adults, and children are hurt because of rampant stupidity, does that mean that a product should be persecuted into oblivion? Nowadays, a single case of harm means that the personal injury attorneys come from the voodvork out, but it was not always so. Something had to be pretty egregious to get government action going.

Here are some other things that are difficult to find nowadays: 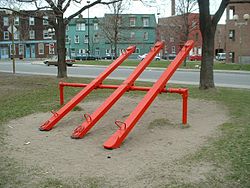 See-saw (or teeter-totter, depending on where you grew up)

I played on each of these regularly, and somehow survived without the tender attentions of an attorney. I fell off of them, was flung off of them, swung around on them, got my cojones smashed on them, bonked my head on them, scraped knees on them, and never once told my mother that I was entitled to compensation. When my oldest son fell off a jungle gym and broke his arm in the early 80’s, it was an “oh well, huh” type of event – he got a blue cast, was cool for a few weeks, and survived to be an awesome young man. Today, you’re lucky if you can find a playground worthy of a child’s attention – all of them dumbed down to the level of a McDonald’s playland.

I blame the growing litigiousness and entitlement mentality of our society: people willing to sue at the drop of a hat, and attorneys encouraging them to do so. The CPSC still has a valid function, because people will also try to market anything that turns a buck and providing our kidlets with lead-painted toys and chokables is still rather not done. But that doesn’t mean every item that could cause harm to a child, especially when it’s prominently and forcefully advertised as being for adults only, should be hounded out of existence.

The death of common sense saddens me.