OK, caveat here: it’s may not be Native American counting, but that’s how it was presented to me by my math teacher (Mr. Sommerville, go ndéanai Dia trócaire air) in high school, around 1967. On the other hand, maybe it is.

The entire schema as he presented it was:

Being testosterone-soaked boys, everyone laughed at hearing the word “dick” used as a number, and then life went on. I had heard it once, and remembered fragments of it forever.

Then came the Internet, where almost everything arcane has a tendency to show up if you wait long enough. I would search occasionally, and over time, bits and pieces appeared; now there is a full-blown Wikipedia article entitled “Yan tan tethera,” and the real story becomes quite complicated.

Over at Wovember Words, the matter is treated thusly (the whole page is worth a read):

The only reference we could find anywhere confirming connections between the counting words of Native Americans with those used in the North of England is in a musical written in 1957, called The Music Man. There is a scene in this play where the wife of the Mayor exclaims “I will now count to twenty in the Indian tongue! Een teen tuther featherfip!” Is this line in the play responsible for the idea that Native American peoples were using these old counting words with their Gaelic origins, or does it reflect that through the dark mechanisms of Imperialism the counting words were imposed onto Native American culture by the time the play was written?

If you listen to the soundtrack of the movie version of “The Music Man” carefully, there’s a bit more:

Eulalie begins: Een teen tuther feather fip!
The chorus chants: Sakey, Lakey, Corey Ippy Gip (This may not be 100% accurate as these words do not appear in the screenplay)
Eulalie continues: Eendik Teendik Tetherdik Fethertik … (she is interrupted by a firecracker)

So we can see that it’s entirely possible that these counters, very similar to the Brythonic counting systems – too close to be coincidental – may have been transmitted very early by some oral channel to Native Americans, and that by folklore tradition a knowledge of these counters worked their way down cultural pathways to be included in the play and movie.

Language and its history are curious things, with enough puzzles and questions for lifetimes of study – even the whimsical bits.

From Maps on the Web:

A brief history of the Gaelic languages: Middle Irish spread into Scotland and the Isle of Man about 1000 years ago and has since developed into Scottish Gaelic, Manx and Modern Irish, though all are somewhat mutually intelligible (like Spanish and Catalan).

In the Republic of Ireland, Irish is a compulsory subject for 14 year’s of education up until college/university. While 41% of Irish people ticked Yesto the question Can you speak Irish? on the 2011 census, the reality is that only 4.4% use it outside the education system on a regular basis. This 41% figure is a reflection of Irish people’s aspirations for the language rather than ability. I would guess that no more than 10% of the population could actually hold a conversation in Irish, if even.

The situation in Scotland is worrying as they don’t have the huge popular and political backing like Irish does. And Manx died out as a native language 40 years ago but it’s seeing a recent revival with Manx-medium education.

Although the map states that 41% of Irish people surveyed claim they can speak Irish, the number of those who speak it fluently and daily is much smaller, with most of that 41% remembering not more than “cúpla focail” (a few words) of the torment they were required to endure in secondary school. But there is still a fierce pride around the language in some circles, even among the diaspora, which is true of the other Gaelic languages as well – witness the ongoing “Deireadh Seachtaine Gaeilge” (Irish Weekend) held yearly in San Francisco, and the ongoing work by Foras na Gaeilge, among others.

Even Cornish, which died “officially” in 1676 with the death of Chesten Marchant, has witnessed a revival, and Agan Tavas exists as a support organization for language learners; Breton continues to live, and its percentage of pupils in bilingual education has been growing. albeit slowly.

The map above does not address Welsh, (a Brythonic cousin to the Goidelic family) which has historically maintained the strongest foothold within the English-speaking world, but even this bastion of individuality is weakening somewhat:

The above map shows the changing percentage of those who claim to speak Welsh over the period of 10 years.

Throughout the Celtic world, street signs are one of the places where local languages are most visible:

And naturally, if you want to place a new sign, you need the text translated. But woe to the government worker who orders a sign without knowing what the hqiz they are doing: 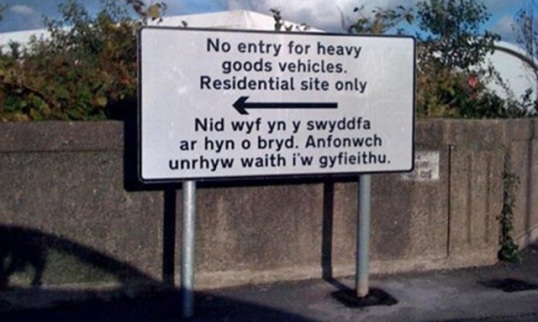 The Welsh text on the sign above reads, “I am not in the office at the moment. Please send any work to be translated.” This was obviously an auto-response by a translator on vacation, but the ragskull handling the matter spoke no Welsh, and assumed that this was the desired translation. Oops.

Languages and dialects die almost every day. The Celtic family continues to struggle, particularly given the onslaught of English, indisputably the most popular international language. But the pride of Celtic language speakers will ensure that the death of these beautiful and historically rich tongues will not come until a day far in the future.