I love old pictures like this. It’s intriguing to see the headlines, and also to realize that London had a functional and practical underground before the turn of the 1900s. 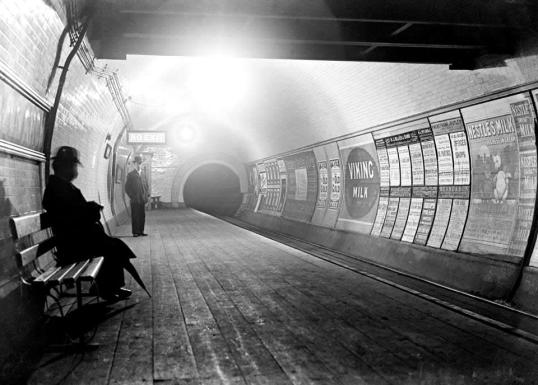 There’s something about old photography. It connects me with the past, makes it real, brings it to life. I love scrounging around places like Shorpy and /r/historyporn; I find the most fascinating things there.

I’ve mentioned this before in this post, but here is a lovely shot of the elevated train that used to run up and down Third Avenue in New York City [Photo: Vivian Maier, hat tip commenter Ron for the attribution.] Its official name was the IRT Third Avenue Line.

An extract of the cartoon by Charles Addams is worth reposting here:

The caption read, “Sometimes, on nights like this I can still hear it rumble by.”

I was only four years old when service was discontinued and the Manhattan elevated trains faded into history, but I remember the “El” well. It was the last survivor, and was supposed to remain in service until the Second Avenue Subway was built (envisioned since 1929, and only now under construction; it’s history rivals the Sagrada Familia in Barcelona for “fits-and-starts” construction), but pressure from real estate investors caused its ultimate demise.

As a historical curiosity, notice those little fire pots on the road. Those were ubiquitous warnings found everywhere in the East where construction was going on – they were in use as late as 1965, if I recall correctly. They were the earlier version of these, which are now everywhere: 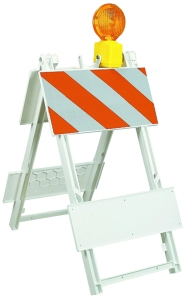 And the curious thing is that I can’t find a decent photo of one anywhere. But up close,they looked like this:

Edit: Ha! Thanks to my friend John Lavezzi who reminded me that these things are called smudge pots.

And now you can buy them in modern form for your patio:

A random New York City memory, one among thousands.

Those rattan-woven seats… I saw a picture of this subway car and had a flashback – as a child, I always thought they looked like corn on the cob. The fans on the ceiling… in the days before air conditioning, those subways could be stifling. And when the trains went over a dead spot in the 3rd rail and the lights went out, the little emergency lights in the ceiling would come on.

These were everywhere – Chiclets and Dentyne and gum, oh my – a piece for a penny. You’d put in your coin, slide the lever, and press it down to vend your prize, or just put your penny in the appropriate slot and turn the dial.

Two lines only: BMT and IRT. IND came later. When you’d get to 42nd Street, red and green light bulbs in the ceiling of the stations would guide you to the correct line, with blue ones for the cross town shuttle. Hole-in-the wall vendors: The Wizard’s Shop that sold magic; fresh-squeezed orange or papaya juice, all sorts of wonderful things.

Such elegant mosaic work in so many of the stations.