In light of the recent tragedy in Paris at the offices of Charlie Hebdo, a discussion sprung up on Facebook when a friend of mine, in reference to this article at the Daily Beast, asked the question, “where does humour cross the line into something rather ugly, threatening and repellent?”

I commented as below:

In some ways, Charlie Hebdo is the Westboro Baptist Church of the literary world. It’s a partially flawed analogy because WBC produces nothing positive whatsoever except hatred and misery, while Charlie Hebdo satirizes many things that deserve satire. Are they offensive? Absolutely… but then so is South Park, which show is afraid to pillory nothing. Mad and Cracked back in the 60s and 70s were very similar [1]; the French outfit simply doesn’t have the same restraints on them as American television or magazines, so they’re free to add all the crude sexual [and religious and political and social] humor they want. It may be this “crossing of the line” that some people find so offensive rather than the actual satire itself.

1) You’re free to say and publish what you want, and the government can’t come after you for it.
2) You are *not* free from the consequences of your speech.

In this sense, I agree with the thesis of the article. Charlie can be pretty nasty; just look at the comments of Dutch cartoonist Bernard Holtrop (Willem):

“We have a lot of new friends, like the pope, Queen Elizabeth and (Russian President Vladimir) Putin. It really makes me laugh,” Bernard Holtrop, whose pen name is Willem, told the Dutch centre-left daily Volkskrant.

“Marine Le Pen is delighted when the Islamists start shooting all over the place,” said Willem, 73, a longtime Paris resident who also draws for the French leftist daily Liberation.

He added: “We vomit on all these people who suddenly say they are our friends.”

The authors and cartoonists who work at Charlie Hebdo are not necessarily nice people, but they know who they are and they know the risks they are taking by being deliberately offensive. Unfortunately, this week some of them paid the price for taking those risks. This is sad, and unconscionable, and they didn’t deserve to die… but in the grand scheme of things this was not totally surprising.

I remember buying some of the first editions of Charlie when I was living in Italy in 1970. There was a parallel publication in Italian called, interestingly, “Linus.” I now wish I still had them – they’d be worth quite a bit.

As part of the discussion, another member of our community indicated she could identify with Willem’s disgust, citing the world leaders who are marching in Paris while pursuing national policies of destruction and/or oppression. And that’s a valid debate. I replied,

It is another debate entirely, and one that needs to continue. There are many who see the outpouring of support for Charlie as a good thing, others see it as superficial lip-service. And certainly, In that crowd of thousands marching in Paris, you would find thousands of reasons for being there.

In this particular case, I see Willem’s reaction (and those of many, many others in the blogosphere) as a confirmation of the axiom that reality is perception. We see things not as they are, but as we are.

Charlie Hebdo in many ways crosses the boundaries of responsible journalism into the realm of “we’re going to be assholes  just because we can.” And while that aspect of satirical organs is repugnant to many, even those not the targets of their caustic commentary, it is and must remain protected – because if you shut them down, where does the censorship stop?

What happened in Paris is a tragedy of immense significance, and it has ignited a vigorous debate on the nature and aims of the Islamic extremist movement. In these attacks some have seen more than just revenge for offensive cartoons; journalists and analysts all over the world have chimed in suggesting that the true motive was to actually inflame hatred for Islam, making it easier for the terrorist groups to recruit the uneducated and the ideologically susceptible.

In the end, Charlie Hebdo is a pretty lowbrow publication, but I will defend to the death their right to be that way (as Voltaire’s biographer stated, although not Voltaire himself) – because if I don’t, it clears the pathway to the censorship of all writing, including my own, just because it happens to offend somebody, somewhere. And by the same token, I’m free to read it or not read it, and free to choose whether or not I will be offended.

So, yes. As Albert Uderzo so elegantly said by coming out of retirement:

[1] Check out this tasteful ad for a revival of Disney’s Snow White from Mad’s December, 1970 issue:

This should be read by every Muslim, preached over every pulpit by every Imam. 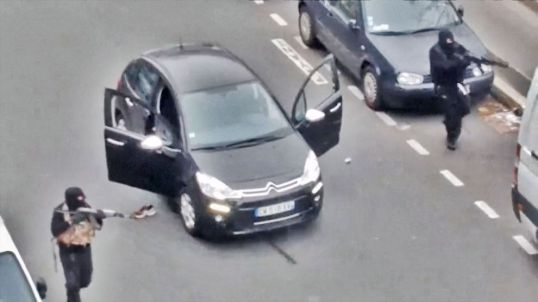 These are the terrorists who attacked Charlie Hebdo yesterday. But there have been many such in recent years.

While the world picks up the pieces and tries to rebuild, I have some questions for you. You whose bloodlust cannot be slaked.

“What have you really accomplished?”

Yesterday you killed 12 people and freedom of expression. You say that you avenged the Prophet. You were violated because caricatures were drawn. Charlie Hebdo had a circulation of 50,000. You changed this yesterday. Those caricatures you thought were worth killing for, so that no one would ever again dare to caricature our prophet? Those cartoons had a circulation of 500 million yesterday. At the very least.

Newspapers worldwide have the cartoons on the front pagte today, online, on paper. Millions have changed their profile picture to a caricature of Muhammad . You said “Charlie Hebdo is dead.” The world responded by saying “Je suis Charlie,” “I’m Charlie.” You’ve made ​​Charlie Hebdo immortal. And freedom of speech has reemerged stronger than ever. And did you know that many Muslims, who in 2005 and 2006 were hurt and depressed over the Mohammed cartoons, yesterday wrote that they have changed their minds? They say that the killing of the defenseless is a far greater insult against Muslims than caricatures will ever be. They say: “Draw, draw, draw.” This is what you have achieved.

You threaten and kill

You came onto the stage in earnest on 11 September, 2001. You began with the terrorist attacks in the United States. There you killed 2,996 people. You helped start the “war on terror”. It’s not over yet. And perhaps the war will never be won. The war has resulted in 116,657 civilian casualties, and the count is still rising. Most are Muslims like you and me. Children, the elderly, women and men. Tens of thousands of civilians have been killed by NATO forces, tens of thousands of civilians have been killed by you. You call them victims in the war for God, and you butcher them down without blinking, your your fellow-muslims. And your fellow-muslims must answer for your crimes. Hate crimes against Muslims in Western countries are on the rise. This is what you have accomplished.

You say you are going to spread “true Islam.” Your method is automatic weapons, suicide bombs, indoctrination and fear. Pure fear. You threaten to behead, whip and stone your fellow-muslims into believing in what you believe is true Islam. You call yourselves IS and have killed 24,000 people in Iraq: Muslims, Yazidis, Christians. You use children as soldiers and sell women as sex slaves. You are few, but Muslims are numerous. The many will never live as demanded by the few. Therefore you can never make progress with democratic means. So you resort to the sword and call yourself a lion. Over a hundred Muslim eminent scholars, with close to a billion Muslims behind them, call you an insult to Islam. This is what you have achieved.

The day you lost the battle

The last few years have started something new. You go for the most defenseless. Women, children, aid workers and journalists. You shoot one Malala in the head, because you do not like what she says. Today hear a whole world of Malalas. You shoot 132 children, most boys in puberty, because you think Islamic writings demand that, in the head. From close range. You think this will scare the Pakistani military and the Pakistani people. Pakistan responds with airstrikes, mass executions of convicted terrorists, and mass mobilization against you. A mobilization Pakistan has never seen before. So what have you accomplished, really?

Have you ever thought of the following: If you possess the one truth, should not one billion Muslims follow this of their own free will? You’ve had well over a decade to fight for your case, your interpretation. If your arguments had weight, would you not then have managed to convince all cartoonists to put away the pen? Do you see that you lost your case the day you picked up your weapons? I ask because I am a Muslim.