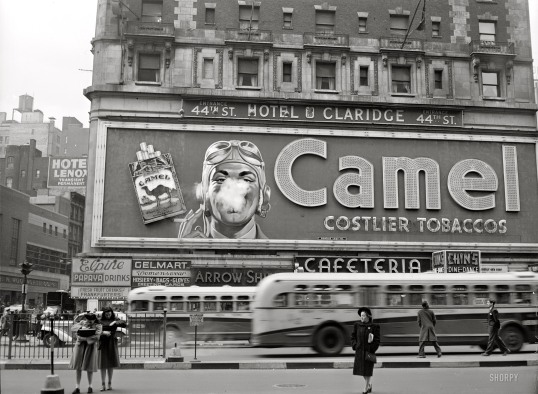 Photo found at /r/HistoryPorn, posted by /u/DaHitcha. Text along with the image:

In 1941 a billboard was installed that marked one of the most well knows advertising campaigns in history; Camel cigarettes. This billboard was apart of Times Square’s history for 26 long years. The billboard displayed a man blowing smoke toward his audience with “Camel” gleaming in bright lights.

For two and a half decades the Camel Cigarette was advertised with two novel billboards that were so clever they easily caught the attention of the passing public. Known as spectaculars, these billboards blew the illusion of a giant smoke ring every four seconds. Steam from a piston-driven diaphragm was forced out of a hole, and this mimicked a person smoking. The spectacular most often photographed was located in New York City’s Times Square at 44th Street and Broadway. Some consider this Camel billboard the most famous of all outdoor advertising signs.

I grew up in New York, and I remember this sign well, as will my friends of that era. As a kid I remember standing for as long as I could watching the smoke rings… on calm days they would travel halfway across Times Square. I was sorry to see it go.

Over at Facebook, Marie-Lou Chatel created a colorized version of this photo which gives you a better feel for how it looked:

Cigarettes and alcohol were a huge percent of advertising back in the day. My own mother was a commercial actress, and Camel selected her as their spokesperson for a time. I remember she’d get a carton a week in the mail as part of her residual compensation.

Cigarette use in the US has been declining steadily since the tobacco heydays:

I’m sure the tobacco industry is unhappy about this, but they have more than made up for their domestic losses by exporting their products of death to foreign economies; while both consumption and exports are on a gradually declining trend, it’s interesting to note that foreign exports still more than double domestic consumption.

It is to be hoped that at some point in the future, tobacco will be once again considered a useless weed with no commercial value, thus saving countless lives and healthcare costs in the process.

To my eternal discredit, I smoked heavily when I was a kid. I thought it was cool, and six years of it left lasting scars on my lungs. But when I started smoking, a pack of Luckies cost 33¢. Yes, that was more in 1965 than it is today, but let’s look at current prices in Europe and environs today (all prices are in Euro.) 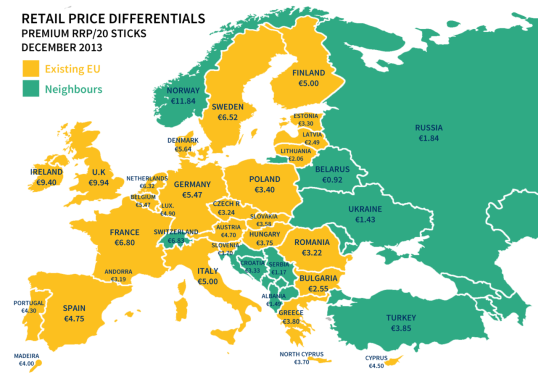 For the United States, the following list will suffice (found at The Awl). Notice that some states appear on the same line if their prices were identical.

To help with the comparison, here’s a map as of 1/1/2014 showing state tax prices on tobacco:

If you want to know how much smoking has cost you or will continue to cost you in terms of raw dollars, you can use the American Cancer Society’s Smoking Cost Calculator.

As for health and societal costs, you can see more information here.

The Old Wolf has smoken.

Back in the day, not only doctors but babies, sports figures and Santa Claus would hawk tobacco products. My mother did Camel commercials, and I remember that for a while she would regularly receive a carton of Camels in the mail from the sponsor as part of her compensation. Small wonder I took up the habit when I went away to prep school – back in the day, it was still considered the cool thing to do. And, as I had no other claim to fame and fortune, I developed the knack of finding the nastiest, strongest brands I could – Gauloises, Players, English Ovals, and some Turkish abomination or other come immediately to mind. By 1969,  when I finally quit, I was smoking 3 packs a day of unfiltered anything; when I’d cadge cigarettes from my mother, who smoked Carltons (what an abomination they were), I’d have to rip the filters off.

Despite a sea change in conventional wisdom, today roughly 1 in 6 people still use tobacco worldwide; in the USA, 20% of adults still used tobacco as of 2010. Big tobacco and those who took payoffs to promote this deadly product shoulder a large part of the responsibility.

If you smoke, quit now. It will kill you.

The Old Wolf has smoken.