This article was originally published in the NMU Pilot, the official organ of the National Maritime Union of America, AFL-CIO, June, 1970. As for why I’m republishing it here? Maggie was my mother, and I interfaced with the USS for a couple of years in the 70s at their club in Naples, Italy.

WHAT do you mean, “whatever became of Margaret Draper?” Why, she is working at the most interesting job she ever had in her life and enjoying every minute of it. Margaret is Assistant Director of the United Seamen’s Serv­ice Center in Cam Ranh Bay, South Vietnam. She has been on the job for a year, putting up with all sorts of inconveniences like running out of her fa­vorite visual aid-lipstick, getting her hair mussed in helicopter downdrafts and sweating out occasional Vietcong alerts-all this so she can give the best of service to ship crews and military personnel in that godforsaken corner of the globe.

In the year she has been out there in Vietnam ­she’s due to be reassigned soon – Miss Draper has shared a lifetime of experiences, some good, some bad, and has profited from a new and deeper under­standing of the men she went to Vietnam to serve. “1 am constantly meeting the same diversity of pur­pose and attitudes in people that one finds any­where el se in the world and that, of course, makes each day stimulating. I have met men here who were formerly ranchers, hotel owners, stunt men, actors, sailboat racers, PhD’s, floaters, students and lost souls,” she wrote in one report.

Her presence in the Cam Ranh Bay Center pro­vides the men with a most photogenic reminder of home. Working closely with USS Director John Chambers, she performs a multitude of services running from arranging outdoor barbecues to shop­ping at the local Post Exchange to clearing away military red tape so a seaman can have a reunion at the Center with a son fighting nearby with the Ma­rines. “Margie Draper is always ready to help or assist you while you are there and there are many ways that a worldly seaman needs help and assist­ance,” one crew member wrote The PILOT recently from Vietnam.

The United Seamen’s Service opened the Center in Cam Ranh Bay late in 1966 at the height of the Vietnam sealift when sometimes as many as 100 ships waited in the harbor to discharge cargo. NMU used its influence to virtually move moun­tains of red tape so that the Center could open. The National Office sent Vice President Mel Barisic to confer in Washington with Maritime Administra­tion, Navy, MSTS and Department of Defense officials on the project.

Barisic and Assistant Contract Enforcement Of­ficer T. J. Walker made a total of three trips to Vietnam to expedite construction of the Center and otherwise improve mail service, shipboard condi­tions and shore leave privileges for merchant sea­men in the area. The Union also backed construc­tion of the Center in Qui Nhon.

Indoctrination course. Like all USS club person­nel from the States, Margie underwent a brie but thorough indoctrination before departing for her post in Vietnam. This included a tour of the hiring hall in New York, a visit to the Upgrading and Re­training School and talks with NMU officials at the National Office and port levels. “You have no idea,” she says, “How much easier it is to hit it off with the seamen when they find I know what a ‘killer card’ is, and what goes on at sign-on and pay-off’, and which end is up on a console in the engine room of an automated ship.”

Miss Draper’s arrival in Cam Ranh Bay last June was made less traumatic when she was greeted by Vietnam veteran Elmira Liebau whom she was replacing. Miss Liebau, known as “Lee,” was very helpful in getting the neophyte settled in surroundings that were different, to say the least. A “must” for the newcomer were instructions in the protocol for a woman living on a military base, a compendium of delicate do’s and don’t’s laid down by men, who else?

On  inspection trip to Cam Ranh Bay last year, Vice Admiral Lawson P. Ramage, then commander of the military Sea Transportation Service, tells Margaret Draper how delighted he is with the facilities of the USS.

A simple plumbing job can take weeks in Vietnam. Just like home, as USS Director John Chambers and Miss Draper find in business huddle above.

After giving Margaret an appropriate introduction to the mysterious workings of the ice-making machine and how best to coax the Vietnamese employees of the Center to give their all to their jobs, “Lee” went on to begin the second year of her tour of duty at a new post at Qui Nhon, leaving the “new girl” a full set of instructions on the care and feeding of a new cat family.

Some routine. After the first few weeks in Viet­nam, the days began to fall into a routine. That is, if you can call “routine” the explosion of bombs at the Convalescent Hospital last August 7. At that time security was tightened and everyone was in­structed to keep their eyes peeled for VC terrorists. After that scare, a steady round of visiting ships in the harbor to pay respects to the Captains and to leave notices of activities at the Center proved to be one of the more pleasant of Margaret’s varied duties. 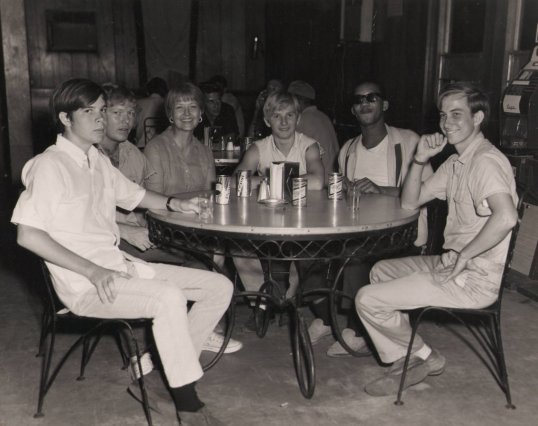 At the Center her time is well spent meeting and greeting a succession of visiting brass from the American community. A lot of hard work goes into preparing special buffets for the merchant seamen and soldiers, but the reward of seeing the delighted smiles of the visitors more than compensates for the days and sometimes weeks of planning neces­sary to make these affairs successful.

The Center at Cam Ranh Bay never lets a tradi­tional holiday such as the Fourth of July, Thanks­giving and Christmas go by without making a spe­cial effort to bring a touch of home to the men out there. USS Executive Director Ed Sette was a spe­cial guest at last year’s Thanksgiving dinner and dined well on a turkey and all the trimmings do­nated from the freezer of the SS Rider Victory.

They also serve. People like Margaret Draper and John Chambers at Cam Ranh Bay, and Elmira Lie­bau and Bob Sprague at Qui Nhon, and other USS personnel in Centers around the world come into daily contact with the seamen who show their appreciation for their services in many ways. But back on the home front, a lot of hard work also is being done to get more funds from the seamen’s unions, from the shipping industry and from the various community funds with which to carry on their work in Vietnam and in other ports around the world. Not the least important aspect of the work of the staff here in the States is keeping open the lines of communication with the Department of Defense in Washington so that the Centers in Cam Ranh Bay and Quin Nhon can continue to render their much needed services. The United Seamen’s Service, in case you did not know, operates on mili­tary premises in Vietnam under an agreement with the Military Sea Transportation Service which states, in part:

“The United Seamen’s Service is a non-profit wel­fare agency, international in scope, established for the purpose of serving the American merchant ma­rine, military personnel, members of the United States Department of State, and other authorized contract workers with the services-” The agree­ment goes on to list 24 different services, some of which USS cannot render in a war zone and some of which are improvised as the need arises. But with­out these services, and without the zeal of dedicated people like Margaret Draper, morale among mer­chant seamen in Vietnam would be low indeed, so low as to seriously hinder the job of supplying our fighting men in Southeast Asia.

Dressed for party, Miss Draper gives final approval to trays of canapés fashioned by the chef, Mr. Do.

Despite the worldwide decline in merchant seamen (the huge computer-controlled cargo behemoths require ever-fewer humans to run them), the United Seamen’s Service still functions in seven centers around the world, providing necessary services to seafarers.

As I gradually work through mom’s papers, I know there are other photos and tales from this era, and I’ll do my best to get them up here as time permits.