Back in August of 2006 I began a chronicle of my journeys through this green earth over at Livejournal. I’ll probably keep that journal up as my main place to post, because I like its features – and I also have some personal reasons for supporting its existence.

Recently, however, I encountered this graphic by Randall Munro over at XKCD which gave me pause: 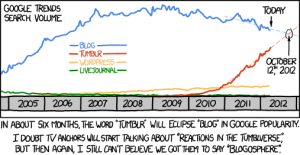 … and from past experience I realized that he’s absolutely right – LJ just doesn’t get the exposure that a standard blog does.

While most of my logorrhea I write for myself and myself alone, there are things I think are important enough to share with the world at large, hence the creation of this blog; some of the material here will be original, other posts will come from previous Liverjournal entries. May what you find here please you.

The title of this blog comes from R. Buckminster Fuller’s concept of the World Game, to wit:

“Make the world work for 100% of humanity, in the shortest possible time, through spontaneous cooperation, without ecological damage or disadvantage to anyone.”

It is a philosophy which I have adopted, and which I will be working to implement for the rest of my existence. It is the core of my 500-year plan. Another great man, Brian Klemmer, whom I was counted privileged to consider a mentor while he was yet alive, expressed much the same goal when he made it his life’s work to build “bold, ethical leaders who will build a world that works for everyone, with no one left out.”

Our world needs help. Everywhere we look, we see strife, confusion, aimless existence, corruption, malfeasance and hopelessness. Yet everywhere we look, we can also find goodness, honor, strength, integrity, creativity, perseverance, trust, and random acts of brightness. And we see what we choose to see. There are people out there working hard to make a difference in the lives of others, and raise the human condition; that’s the club I want to belong to.

John Denver included the song “World Game” on his “It’s About Time” album, and it expresses the same ideas:

Life is a journey, made up of multiple excursions. Jenkin Lloyd Jones put it wonderfully when he said,

“Anyone who imagines that bliss is normal is going to waste a lot of time running around shouting that he has been robbed.

“[The fact is] most putts don’t drop. Most beef is tough. Most children grow up to be just people. Most successful marriages require a high degree of mutual toleration. Most jobs are more often dull than otherwise. …

“Life is like an old-time rail journey—delays, sidetracks, smoke, dust, cinders and jolts, interspersed only occasionally by beautiful vistas and thrilling bursts of speed.

“The trick is to thank the Lord for letting you have the ride.”

I do. I am grateful. And in recognition of all the wonder and bounty that has been mine in my life, I have adopted the following Tibetan prayer as a motto.