I have always loved optical illusions. One of my first introductions to a famous one was the 1965 “three-pronged poiuyt” from MAD magazine (otherwise called a “blivet”):

But there are many others. The one below is one of my all-time favorites – it contains both the words “optical” and “illusion”, depending on where you look.

The spatial-perception phenomenon is exquisitely illustrated among the geometric shapes below – what you see depends on whether you are looking at the blocks, or at the spaces between them.

The next one makes my head hurt. Try counting the black dots: 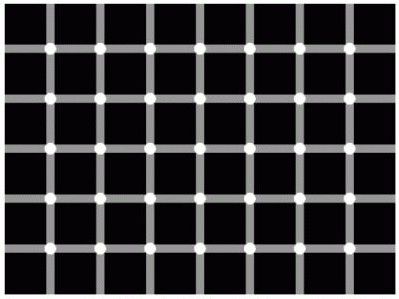 This one is uncanny. Stare at the “+” for a while, and watch the dots gradually vanish.

Similarly, if you stare at any point in the image below, the entire thing will gently fade away.

The wheels below are not moving. Really. 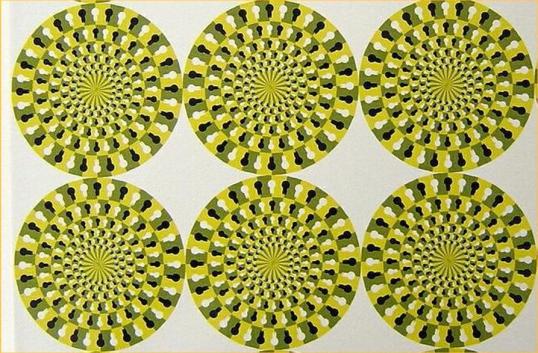 The following one is a mindbender. Stare at the spinning dancer for a while – she’ll switch from clockwise to counterclockwise at random. Some people can shift their perception of her at will, but I’ve never found the knack.

If you’re having trouble, the gif file below has been tweaked to let you switch back and forth with less difficulty. Look at the image on the left, and the silhouette will rotate clockwise. Look at the one on the right, and she’ll change directions for you.

Edit: Here’s one that’s similar, but a bit easier to manipulate. Kind of uncanny.

And on that note, here’s the “flashed face distortion,” which is pretty darn creepy – but it’s a real thing.

The famous drawing “All is Vanity” by Charles Allen Gilbert below has long been one of my favorites: 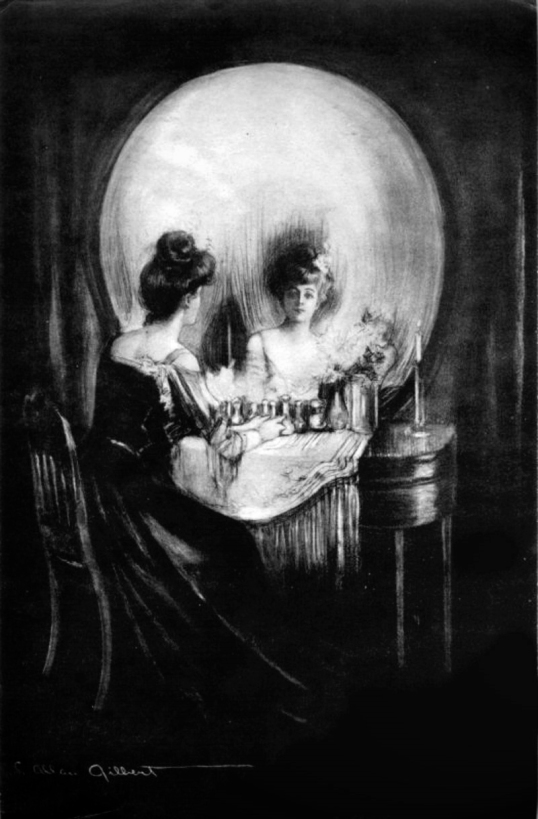 This modern one is less of an illusion than a perceptual challenge – how long did it take you to find the face among the coffee beans?

This animated GIF file is less of an illusion than an interesting phenomenon, but I thought I’d add it here. Watching the waves move is captivating.

The image below is not a .gif file. Watching it makes me woozy.

Last one. Click on the spinner below to get a full-size image. Watch the center for about 15 seconds, and then look at the palm of your hand. Try not to faint.

There is no end of illusions on the Internet, but these are some of the ones that I find the most intriguing. Our minds do very strange things – in the book Perceptual Development: Visual, Auditory and Speech Perception in Infancy
By Alan M. Slater, the famous prism-glasses experiment is mentioned – contrary to conventional wisdom, the subjects may not have “inverted” their world, but a form of adaptation was certainly noted.

What these illusions reinforce for me is this: