Disclaimer: This post is entirely subjective. Others will have different opinions. As a long-time numismatist, these are the ones which have captured my imagination.

The St. Gaudens piece was originally struck in ultra high relief, such that it took nine strokes to create it, rendering it impractical; only 20 specimens are known, and they are valued at up to $3,000,000.

St. Gaudens was grieved, but made a few changes to his design under the misapprehension that the first coins were struck on a production press, rather than the mint’s only medal press; the next high-relief version only took 3 strokes, but was still impractical for production use. 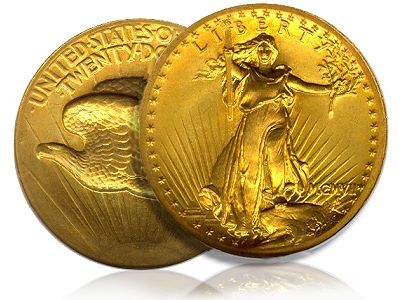 It was only after St. Gaudens’ death that a production version in low relief was approved. It is still a masterful work of art.

The Walking Liberty Half Dollar

The combination of the liberty and the majectic eagle make for a beautiful piece of coinage. 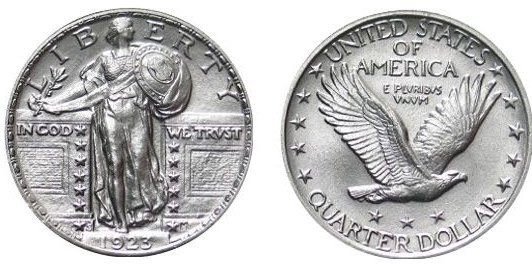 This one vies with the St. Gaudens piece for my very favorite. It is just so aesthetically pleasing. The first version, stamped in 1916, had a bit of a problem:

The lady is rather unclad, which offended the sensibilities of the nation, so the next version had her cover up in a bit of chain mail. In addition, the date was set onto a flat raised pedestal and showed a tendency to wear off quickly – subsequent versions placed the date into a trough where it would be more protected from wear. 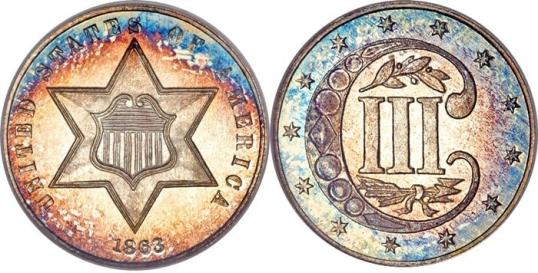 The second-smallest coin to have common circulation, smaller and thinner than a dime, this little gem had a turbulent history.

The Type-1 gold dollar on the left came in at 13 mm in diameter, the 3-cent silver piece at 14. A common dime is just under 18 mm wide. The coin was widely hoarded and melted down for its silver, and shopkeepers found them hard to keep track of. Uncirculated specimens are rare and highly valuable.

Common in circulation when I was a child, these coins are strikingly beautiful, especially when found in uncirculated condition. Can you spot the picture of the car on the reverse? If you’re having trouble, click here. Haha!

These are just pretty, especially when in good condition.

The Stella, or $4.00 gold piece, was a pattern – it was never created for circulation. Nonetheless, I think it’s beautiful. The picture below is one of the finest examples known.

There are others; some of the state quarters that were recently released are quite attractive, but nothing comes up to the standard of previous centuries.