Back in 1962, I remember reading this story, which first appeared in Amazing Adult Fantasy No. 9: 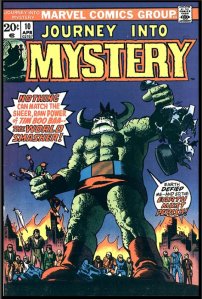 (Journey Into Mystery reprinted the story in April of 1974)

Even at the tender age of 11, I remember chuckling at the campiness of the story, but the resolution left an impression on my mind, because I never forgot it. The surprising conclusion to the story can be read in a 2MB PDF file here.)

Years later, I read a short story in one of my dad’s many vintage science fiction anthologies which I ultimately inherited; the story, by Martin Gardner, was entitled simply “Thang.” Written in 1949, it may have been the inspiration for Tim Boo Ba:

HE Earth had completed another turn about the sun, whirling slowly and silently as it always whirled. The East had experi- enced a record breaking crop of yellow rice and yellow chil- dren, larger stockpiles of weapons were accumulating in certain strategic centers, and the sages of the University of Chicago were uttering words of profound wisdom, when Thang reached down and picked up the Earth between his thumb and finger. Thang had been sleeping. When he finally awoke and blinked his six opulent eyes at the blinding light (for the light of our stars when viewed in their totality is no thing of dimness) he had become uncomfortably aware of an empty feeling near the pit of his stomach. How long he had been sleeping even he did not know exactly, for in the mind of Thang time is a term of no significance. Although the ways of Thang are beyond the ways of men, and the thoughts of Thang are scarcely conceivable by our thoughts; still——stating the matter roughly and in the language we know——the ways of Thang are this: When Thang is not asleep, Thang hungers. After blinking his opulent eyes (in a specific consecutive order which had long been his habit) and stretching forth a long arm to sweep aside the closer suns, Thang squinted into the deep. The riper planets were near the center and usually could be recognized by surface texture; but frequently Thang had to thump them with his middle finger. It was some time until he found a piece that suited him. He picked it up with his right hand and shook off most of the adhering salty moisture. Other fingers scaled away thin flakes of bluish ice that had caked on opposite sides. Finally, he dried the ball completely by rubbing it on his chest. He bit into it. It was soft and juicy, neither unpleasantly hot nor freezing to the tongue; and Thang, who always ate the entire planet, core and all, lay back contentedly, chewing slowly and permitting his thoughts to dwell idly on trivial matters, when suddenly he felt himself picked up by the back of the neck. He was jerked upward and backward by an arm of tremendous bulk (an arm covered with greyish hair and exuding a foul smell). Then he was lowered even more rapidly. He looked down in time to see an enormous mouth——red and gaping and watering around the edges——then the blackness closed over him with a slurp like a clap of thunder. For there are other gods than Thang.

So it goes in our day, and so it has always been. To quote from a book of scripture held dear by members of the Church of Jesus Christ of Latter-day Saints (often called the Mormons),

“We have learned by sad experience that it is the nature and disposition of almost all men, as soon as they get a little authority, as they suppose, they will immediately begin to exercise unrighteous dominion.”  (Doctrine and Covenants 121:39)

Regardless of your particular spiritual walk, this statement has been true for as long as I have been able to observe humanity. Give a man or woman a little power (as they suppose,) and they will promptly begin to act like a feudal lord, safely ensconced in their own little fiefdom. Politicians do it. Bureaucrats do it. Bosses do it. Department managers do it. Teachers do it. School administrators do it. It’s everywhere. One autocratic gatekeeper can keep countless people from access to jobs, goods, services, assistance, visas, passports, approvals, authorizations, or whatever they happen to need. “That’s not how we run things here.” “We do things differently.” “I see no need to change.” “I don’t think so.”

We hear it every day, and in many places, it’s harder to remove a deeply-entrenched functionary or manager or director or senator or president than it is to remove inertia from matter.[1] Yet it boggles the mind – how quickly people lose sight of the fact that they and their organization are really just a small part of a larger whole – the sum total of humanity.

In the 16th Century, John Donne penned the famous lines,

No man is an island,
Entire of itself.
Each is a piece of the continent,
A part of the main.
If a clod be washed away by the sea,
Europe is the less.
As well as if a promontory were.
As well as if a manor of thine own
Or of thine friend’s were.
Each man’s death diminishes me,
For I am involved in mankind.
Therefore, send not to know
For whom the bell tolls,
It tolls for thee.

“We must all learn to live together as brothers or we will all perish together as fools. We are tied together in the single garment of destiny, caught in an inescapable network of mutuality. And whatever affects one directly affects all indirectly. For some strange reason I can never be what I ought to be until you are what you ought to be. This is the way God’s universe is made; this is the way it is structured.”

As Benjamin Franklin stated, “We must all hang together, or assuredly we shall all hang separately.”

If we do not wish to perish as fools, as King said, we must return to principles of decency and the common good. As one small voice crying in the darkness,

My voice is small “amid the noise and haste,” but I raise it anyway. We must get away from Me and Mine, and move back to We and Ours. Do this, and we as a species may yet reach the stars. Do it not, and our civilization is headed for implosion under the weight of social inequity, and then (as John Howard Griffin wrote), “we will all pay for not having cried for justice long ago.”

One response to “Everything is Relative”