When I was around 8, and living in New York City, my mother – a single mom pursuing an acting career – arranged to have a nanny come over from England to take care of me. Mavis was with us for 4 years, after which she went off to seek her own fortune, married a fine Italian gentleman, and raised a fine American family. She was a lovely lady, and we stayed in touch for 50 years until she passed in 2016.

On one occasion I recall she came back from one of her days off and gave me this card as a souvenir: 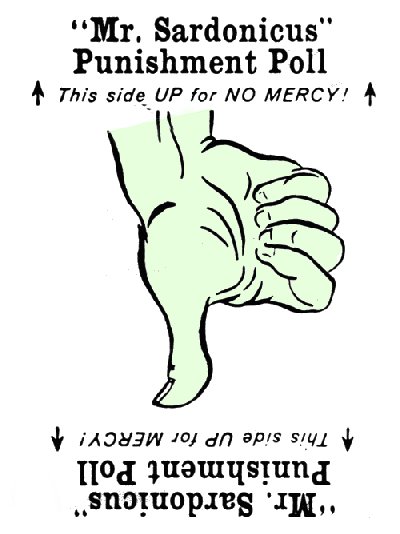 The hand was coated in glow-in-the-dark ink, and I thought it was awesome. For what it’s worth, I wish I had been able to keep it, but it got lost somewhere in the passage of time.

Mavis had gone to see “Mr. Sardonicus,” a horror film by William Castle, one of the more flamboyant showmen of the 50’s and 60’s. Castle promoted his films with clever and (for the times) novel gimmicks, of which the “Sardonicus Punishment Poll” was one; for the film “Zotz!” (1962), each patron was given a “Magic” (gold colored, plastic, glow-in-the-dark) coin.

So here I had this great gimmick card, and from the description brought home by Mavis, the film was far too terrifying for a young child. She was probably right – a couple of years earlier I had seen two other horror films and survived, but they gave me nightmares for years. But up until last weekend, I had never seen the film.

I finally got a chance to watch it, and it’s a good thing I hadn’t seen it as a child. For an adult in the 21st century, it was pretty cheesy, but well-done; even though Rotten Tomatoes only gives it a 38% rating, I suspect the numbers would have been higher if it were rated from a 60’s perspective. I’ve seen worse B-grade movies by far.

The movie is based on Ray Russell’s novel Sardonicus. 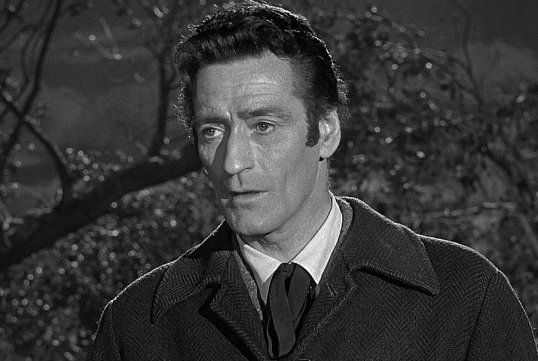 Guy Rolfe stars as Mr. Sardonicus, a wicked and wealthy count (once a poor peasant who won a fortune in a lottery) whose face was frozen into a hideous grin from the shock of seeing his father’s rotting corpse. Sardonicus hires Sir Robert Cargrave (played by Ronald Lewis), a brilliant doctor who has had great success with muscle massage techniques, to help him. Complicating the matter is the fact that Sardonicus’ wife Maude is Robert Cargrave’s old love. Cargrave travels to Sardonicus’ castle and is met by the dedicated servant Krull, who has a badly-scarred eye. During the course of the visit, Sardonicus explains what happened to him, and threatens to torture his wife (the way he had earlier tortured Krull) if Cargrave will not help him. Cargrave agrees, but even when a highly-radical treatment is a success, Sardonicus is not freed from his torment; in fact, William Castle appears and asks the audience to hold up their glow-in-the-dark cards to indicate mercy or punishment. Regardless of the vote, it appears that the audience has voted for punishment, and the movie ends with Sardonicus facing additional horrors for his evil, horrors administered in part by Krull, who takes the opportunity for a little revenge of his own.

By today’s standards, that sweet face would be considered a cheap effort at horror, but in the 60’s, it was sufficient to send moviegoers into a swoon. But viewed through the lens of historical perspective, this movie was a worthy effort, even if it was quickly slapped together by a man who many considered to be the P.T. Barnum of film-making in his day. I’m glad I finally got to see it, and lay my curiosity about that card to rest.

Nowadays I’m more careful to keep odd bits of memorabilia filed away – I remember when we first rode the Indiana Jones attraction at Disneyland, they were passing out these cards so we could transliterate the Mara inscriptions throughout the ride: 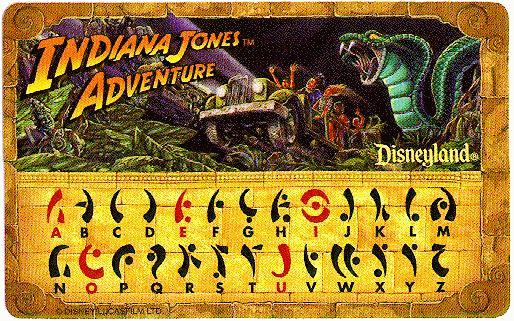 Some day this might be worth a few bucks on eBay, but it will have to be my grandchildren who find out.