The Post Office designed a new set of stamps to encourage kids to get active. Great idea, right?

Unfortunately, thanks to some

on the President’s Council on Fitness, the project has now been put on hold, because it appears that these three stamps are promoting “unsafe” activities: 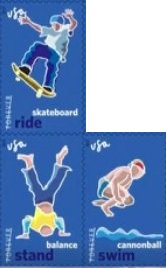 There are times I really wish I could swear. Of all the chuckleheaded, doltish, ludicrous, ill-considered, short-sighted and politically correct nonsense I have ever heard, this takes the cake. YOU BLISTERING SIMPLETONS! Yes, I’m SHOUTING! Did you get run over by the stupid truck? What, are you going to put federal monitors on every school playground and in every backyard, to make sure kids don’t run, jump, do cartwheels, tumble, climb trees, roll down hills, do somersaults, and everything kids do to enjoy life and burn off energy? [1] 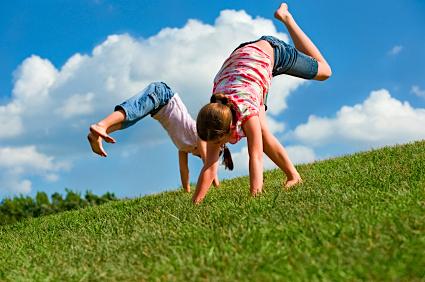 I’ve written about the difference between safety and paranoia, but it appears the general trend continues in favor of paranoia, fueled largely by attorneys hungry for billable hours and with far too much time on their hands. For the love of anything you consider holy, every single one of those activities on the stamp sheet come with some inherent risks; we might as well curl up in a ball under our bed if we’re worried about safety to that extent. At least that way, nothing will get us but the dust mites.

I don’t believe in violence, but things like this are very stressful for me [2].

It was earlier reported that the entire run of stamps is being destroyed, but according to USPS spokeman Roy Betts, “The stamps are on hold and a decision would be made later.”

You can read more about this mind-boggling witlessness at ABC News.

[1] It appears stupidity is not limited to the USA. A school in Australia actually tried to ban kids from doing cartwheels.

[1] Stress: The confusion created when one’s mind overrides the body’s basic desire to choke the living daylights out of some jerk who desperately deserves it.