I learned to love Science Fiction as a child; the first story I read was “Have Spacesuit, Will Travel,” by Robert Heinlein. I was hooked at once. Over the years I have read thousands of novels and stories, many of them remembered only in bits and snatches from decades ago.

Thanks to the Internet, many of my favorite stories have re-surfaced, indexed by the all-powerful Google – which makes this post somewhat meta in nature.

One such story was the delightful “MS Fnd in a Lbry“, written in 1961 by Hal Draper. My mother’s name was Draper, but this was a name adopted by the family to avoid anti-semitism, so there is unfortunately no relation.

Draper took a break from his life’s work of promoting Marxism, and wrote one science fiction story. The information explosion, and associated storage and retrieval problems, is humorously examined in this short story. (This story is also of historical interest, containing one of the earliest predictions of the Web.) The story originally appeared in the December 1961 issue of the magazine Fantasy and Science Fiction. Reprinted in Isaac Asimov and Janet Jeppson (eds) Laughing Space and Groff Conklin (ed) 17 Times Infinity.

All I did was search for “nudged quanta,” and there it was. And I thought to do it because of a photo I happened across at reddit, courtesy of /u/o0OIDaveIO0o, and then posted to Facebook:

In just 25 years. One of the microcards at the bottom stores more than all the others combined. While not directly associated with Moore’s Law, the rapid progression of storage miniaturization has been mind-boggling, especially for those of us who lived through the early days of computers. Nowadays kids take massive storage like this for granted, but to see 16 gigabytes of data stored in a piece of plastic smaller than my fingernail simply boggles my mind, even though I used the technology daily. 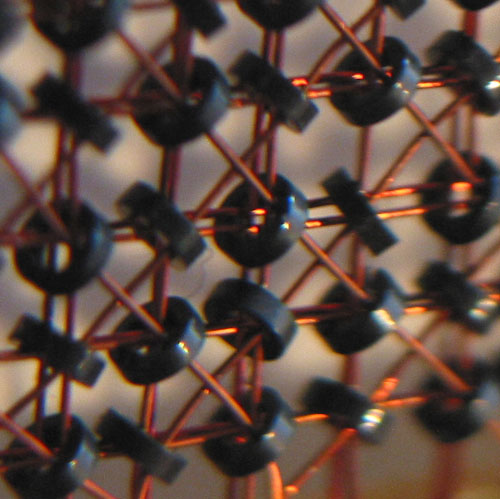 3 responses to “Mathematical Fiction Re-discovered on the Internet”