I’ve always known it. With the exception of a few scarce loss-leaders on the front table at Staples, or the one or two flat-screen TV’s listed at a ridiculously low price at WalMart, the things people are disembowelling each other for could be had for the same price at other, much more peaceful, seasons.

An article in the Wall Street Journal talks about the dirty secret of “Black Friday” discounts:

The common assumption is that retailers stock up on goods and then mark down the ones that don’t sell, taking a hit to their profits. But that isn’t typically how it plays out. Instead, big retailers work backward with their suppliers to set starting prices that, after all the markdowns, will yield the profit margins they want. The red cardigan sweater with the ruffled neck on sale for more than 40% off at $39.99 was never meant to sell at its $68 starting price. It was designed with the discount built in.

Why this is not common knowledge by now is beyond me, other than the fact that most people get their educations from slanted news media and the National Enquirer.

The Week gives some more information in an article entitled Black Friday ads: 4 sneaky pricing tricks — and how to spot them  The summary:

Each of these points comes with advice on how to beat the retailer at his own game, or at least make sure you’re not falling for the scams.

If you need a visual summary, I found this one over at reddit, courtesy of /u/guyinnova 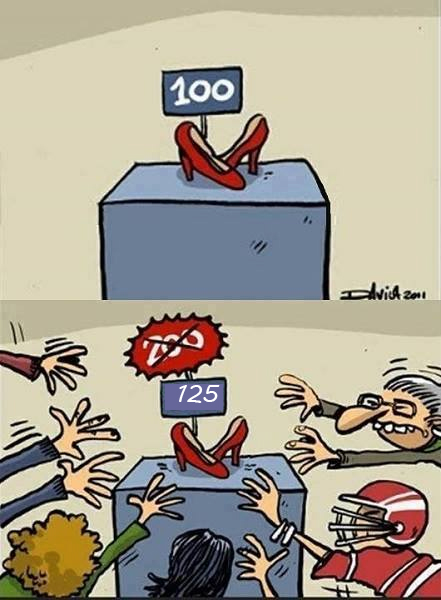 Do yourselves a favor. Stay home on Black Thursday and Black Friday, shop on December 4th (or at other less-stressful times), and do your homework. You’ll save both money, stress, and possibly life and limb.