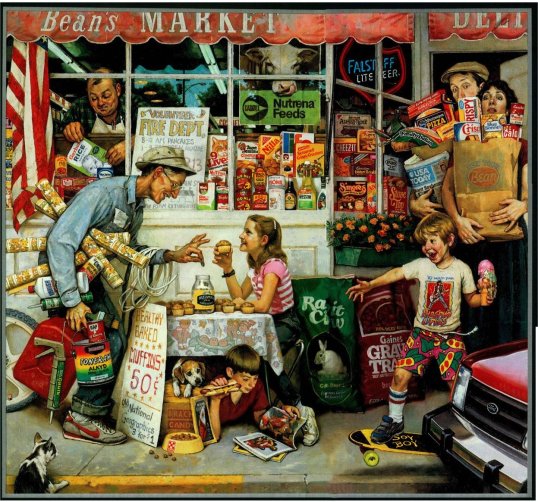 This lovely painting by James Gurney appeared in the July, 1987 edition of the National Geographic, long one of my favorite magazines since early childhood. I’ve had multiple collections of hard copy editions, gathered over the years and then given away when moving (they’re heavy!) and then gathered again. I recently scored a complete set on DVD that included everything up through the 90’s – it still runs on my XP virtual machine – so I was able to get rid of all but the few special editions I wanted to keep.

Gurney managed to get dozens of things based on soy into his painting; about the only thing I haven’t spotted is nattō. The photo of the painting came with the following caption:

Invisible ingredient in countless products, the soybean plays an amazingly pervasive role in everyday life. Artist James Gurney included more than 60 soybean-related products in this painting, done in the style of Norman Rockwell. He not only called on neighbors and friends for models, but also portrayed himself and his wife emerging from the store, startled by a skateboarding boy carrying a cone of tofu “ice cream”; the boy’s shorts-like the tablecloth-bear a bean-pod motif.

The bags the couple carry, the store-window and sidewalk displays are replete with items that have a soybean connection

Cardboard, glues, and animal and human foods are commonplace soybean products. The sidewalk customer’s caulking, paint, wallpaper, gasoline, and the muffin he buys all owe a debt to soy-as does the bicycle tire.

The beer sign reflects the use of soy meal in the brewing process. The fire extinguisher uses soy protein in its foam. And pre-1981 National Geographics were printed on soy-lecithin-lubricated presses. The car symbolizes an experimental one built with soybean plastic by Henry Ford. The artist’s final tribute: He used soy-based paint.

There’s a lot of conflicting information out there regarding the health benefits or detriments of soy; it’s hard to know who’s right at this point in time, but I’ll keep enjoying my tofu and other fermented soy products.

In the meantime, I thought I’d share this delightful and intriguing work of art.