Newser, one of my favorite aggregators, recently published a summary of an article by Stephen Peter Rosen at Wall Street Journal entitled

We Need to Sell Young People on War

Even though the body of the article is behind a paywall, if Newser’s summary is any indication this entire premise is pure kack. Never forget that Congress and the President make war, but it’s our soldiers who fight them; to the latter, honor and respect – to the former, my disdain. If every congressperson who voted to waste noble American blood and resources on futile and inhumane causes were given a weapon and shipped to the front lines, the votes would quickly be different. As Chaucer spake, moste witerliche:

“Up roos tho oon of thise olde wise, and with his hand made contenaunce that men sholde holden hem stille and yeven hym audience. “Lordynges,” quod he, “ther is ful many a man that crieth ‘Werre! Werre!’ that woot ful litel what werre amounteth. Werre at his bigynnyng hath so greet an entryng and so large, that every wight may entre whan hym liketh, and lightly fynde werre; but certes, what ende that shal therof bifalle, it is nat light to knowe. For soothly, whan that werre is ones bigonne, ther is ful many a child unborn of his mooder that shal sterve yong by cause of thilke werre, or elles lyve in sorwe and dye in wrecchednesse. And therfore, er that any werre bigynne, men moste have greet conseil and greet deliberacion.”

For those not comfortable with Middle English, this is what Chaucer wrote:

“And up rose an old man, and with his hand he made signs that men should be silent and listen to him. “My lords,” he said, there is many a man who cries ‘War! War!’ who knows little of what war means. War, at its beginning, has such a great and large commencement that any poor yutz [my translation] can jump in and find war; but it is certain that it is not easy to say what the end will bring. For of a truth, when that war has once begun, there is many an unborn child who shall die young because of this war, or else live in sorrow and die in wretchedness. And therefore, before any war begins, men must have great counsel and deliberation.”

The only reason war is justified – in my poor and simple view, is to “support our lands, and our houses, and our wives, and our children, that we might preserve them from the hands of our enemies; and also that we might preserve our rights and our privileges, and our liberty.”  [1] Insane conflicts in Iraq and Afghanistan, waged to preserve what we consider to be our oil, our power, and our influence do not now fall under this head, and never shall.

Take note: I believe in a strong defense against all enemies foreign and domestic. I do not believe in disbanding the military. But I do believe that a vast percentage of our nation’s resources are being squandered on inhuman and inhumane causes. Have a look at the OMB’s chart showing the president’s 2014 recommendations for discretionary spending: 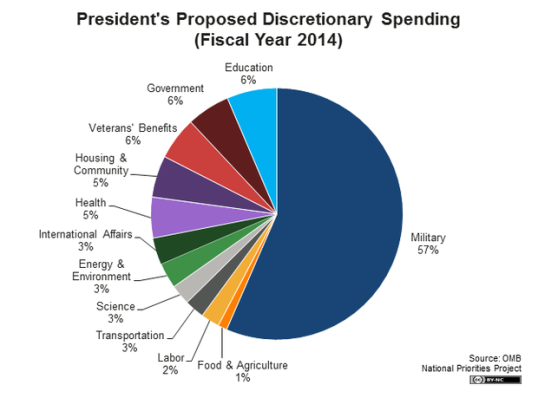 With so many people in this country out of work, with so many children going to bed hungry every night, with so many roads and bridges crumbling to the point of catastrophe, with funding for education and science being cut year by year, a military budget that size is unconscionable and obscene. This is not building a world that works for everyone, but a travesty of global proportions.

With apologies to Bobby Darin, the people here *still* don’t want a war.

2 responses to “The People Here *still* Don’t Want a War.”