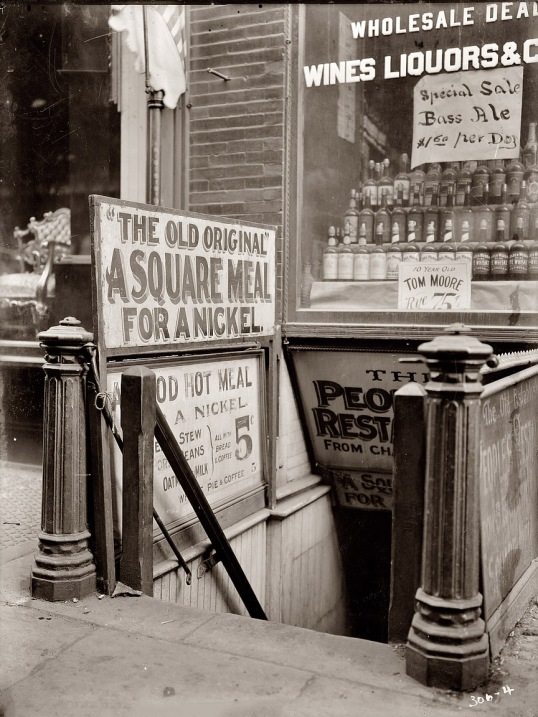 A wonderful explanation and sources were provided by /u/my_interests:

tl;dr: This wasn’t just an ordinary restaurant, it was was part of a charity to provide the poor and unemployed with hot meals. The meals were subsidized by the donations to the charity. They served many thousands of meals per day.

The People’s Restaurants were conceived of and operated by a charitable organization[1], the Industrial Christian Alliance, in 1893 to help feed the poor and the unemployed. J.P. Morgan[2] himself sat on the Board of Directors of the organization.

To eat at a Five-Cent restaurant, one needed a nickel or a meal ticket, which could be provided for free[3] (PDF), or purchased at People’s Restaurant headquarters (100 tickets for $5) often purchased by good Samaritans and churches to give away to the less fortunate. The restaurants had a capacity to serve 1,000 – 2,000 meals per day and were open from 7am to midnight.

The Peoples Restaurant started with a single lodging house and restaurant at 170 Bleeker Street[4] (which is now a Mexican restaurant[5]) and expanded eventually joining with other organizations[6] such as the Merchants’ General Committee to help grow and open additional restaurants and grocery stores.

Though they did much good, it wasn’t without controversy[9]. The 5-cent restaurants were popular and received a lot of press coverage. Other charities claimed that people from outside of New York City, hearing about how well the poor are taken care of, began to come to New York City to live.

According to this source[10], in total nine People’s Five-Cent Restaurants were opened in various parts of New York City, though these were the only confirmed addresses I could find.

These restaurants remind me of the Viennese W.O.K establishments, about which I have written previously.
The Old Wolf has Spoken.