I remember hearing this phrase many times when I was growing up, and always wondered why it was held up as an example of something to be feared.

This recently-found cartoon backs me up.

Then I had one.

The procedure was not really that horrid from the “sitting in the chair” standpoint, because I couldn’t see what was going on, but I remember that it just took a long time. I think if I had seen this animation (the Internet didn’t exist back then), I might have had even more reservations about going. Ow ow ow…

Now, I already had a crown on the affected tooth, so the last bit wasn’t necessary, but I had no idea this process was so involved.

The biggest challenge was the fact that I ached for three months after I had it done. It was insane. I wondered if I was going to have to have the thing done again, but eventually the pain subsided.

And thinking about this whole thing brought up a whole raft of memories about dental work… and I had a lot of it done as a kid.

See, the thing of it was, I was terrified of needles. I started getting cavities in my teeth before I was 8, and had a lot of my baby teeth filled, and I refused to let the dentist give me anæsthetic… so I endured countless sessions in a setup that looked a lot like this: 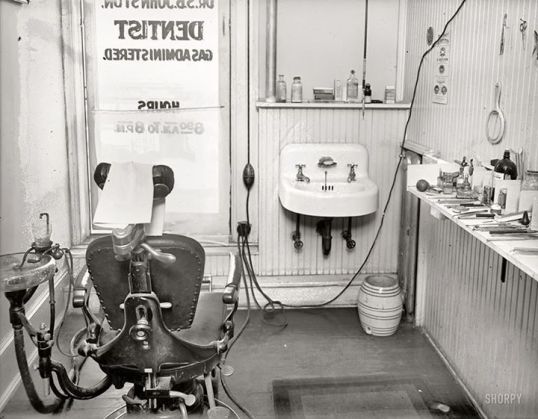 This may be a bit older than the 50s, but the basic setup looked the same as the one Dr. Glick used on me. No high-speed drills here, just that belt-powered grinder, and despite the agony I still refused the Novocaine.

I found out how foolish I had been when I broke a tooth or lost a filling or something when I was at summer camp in Maine, sometime around 1963. They ferried me to a dentist in town, and I told him that I didn’t want anæsthesia. “Mhm,” the dentist responded. “Open.” And then the son of a bitch stuck me.

The blessed son of a bitch.  Sheesh. If only I had known. Dental work still isn’t fun, but a little pain up front is certainly worth a lot less torment for a couple of hours.

A few weeks ago I went to a local dentist for the repair of a broken tooth. I thought for sure I’d have to get a crown on it, because the entire inside surface of the tooth snapped off – but I was pleasantly surprised. A tiny bit of drilling, two applications of bonding, and I was as good as new – at least for this time. The whole thing took about 10 minutes. I mentioned to the dentist that the advances in dental technology were astonishing, and he said that not much had really changed in the tools, but the materials were where the miracles were taking place. I can’t help but agree, with the exception of the digital x-rays that they do these days.

First they put me in this contraption that whirred all around my head and did a complete 360° scan, and then the technician put me in the chair and zapped me a couple of times with this baby:

Handheld, she didn’t even have to leave the room. No developing time to speak of – all digital. I couldn’t help but be reminded of this: 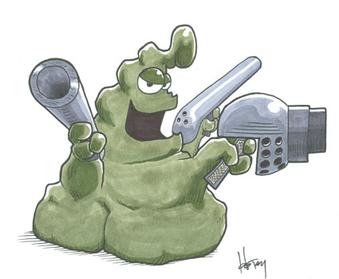 Howard Tayler, author of Schlock Mercenary, holding a replica of Sergeant Schlock’s plasma gun manufactured by Doc Nickel, who in his own right not only manufactures some really awesome paintball stuff but also draws The Whiteboard, a webcomic vaguely about paintball.

It’s funny, but with all the advances, I still miss the old rinse-and-spit routine so common in the old days; you can see the cup and spit bowl in the office picture above. It may not have been as hygienic, but I could get a lot cleaner than the spray/suction routine they use today. And, I got sprayed with Lavoris™, a cinnamon-flavored mouthwash that seems to have vanished from store shelves, only to be replaced by foul-tasting chemical ersatz copies which taste like camel piss.

Imagine my delight when I found out that this wonderful stuff is still available online:

I scored some at Drugstore.com, it was a bit cheaper than Amazon’s offerings, and it was every bit as pleasant as I had remembered it. Now that’s cinnamon.

I’ve had a lot of dental work done in my life. Almost all my teeth are filled, and a number have been capped. I have all my wisdom teeth, and even they have been filled. I just have soft teeth, I guess. But I have all 32, and I’m grateful for the technology that has helped me preserve them. I still don’t like that accursed needle, but as I learned long, long ago, there are prices and benefits to that choice, and the benefits far outweigh the price.

And, I still hope I don’t ever have to have another root canal.

Leave a Reply to The Old Wolf Cancel reply