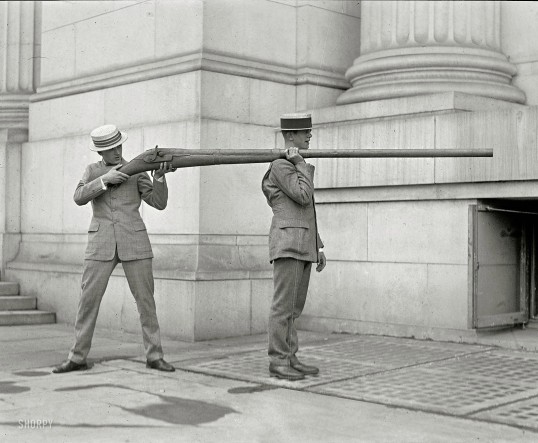 Matthew Quigley would probably have messed his pants had he been able to see this. Such a contraption seems to put his Sharp’s Buffalo Gun to shame, although it was designed for an entirely different purpose.

These guns were so large and their recoil so powerful that they were generally affixed to small hunting watercraft (punts); the force of the discharge would often drive the punt backwards a considerable distance. 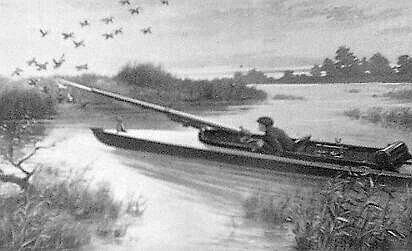 Use of a gun of this nature makes the small craft look like a duck-hunting battleship. While the idea is to be able to kill large numbers of waterfowl at once for commercial hunting enterprises, one wonders if a weapon of this nature would not be more likely to atomize its target!

The Wikipedia article indicates that the use of punt guns in large fleets led to depletion of wild game, and that in the early 20th century market hunting was outlawed, making the use of these weapons either illegal or impractical.

The title of this post refers to blast fishing, almost always illegal because it’s unsportsmanlike, dangerous to the environment, and dangerous for those who attempt it.

The above idiots were lucky that they didn’t lose hands, arms, or heads.