Saw this image float by in a collection of so-called “rare photographs,” and wondered about the back story. 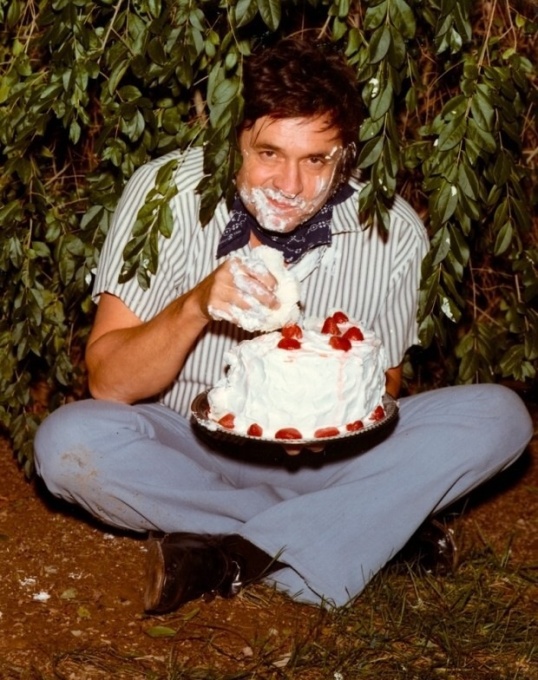 The Internet, of course, has its own answer for everything: 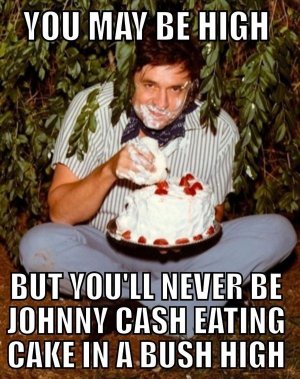 But that’s not the real story. 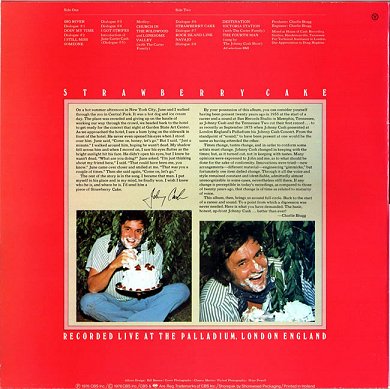 The photo is from the back of Johnny’s album, “Strawberry Cake,” accompanied by this text:

“On a hot summer afternoon in New York City, June and I walked through the zoo in Central Park. It was a hot dog and ice cream day. The place was crowed and giving up on the Hassle of working our way through the crowd, we headed back to the hotel to get ready for the concert that night at the Garden State Art Center. As we approached the hotel, I saw a bum lying on the sidewalk in front of the hotel. He never even opened his eyes when I stood over him, June said, “Come On Honey” But I said “just a minute” I walked around him, hoping he wasn’t dead. My shadow fell across him and when I moved on, I saw his eyes flutter as the bright sunlight hit his face. He didn’t open his eyes, but I knew he wasn’t dead. “What are you doing?” June asked “I’m thinking about my friend here, “I said” “that could be me, you know” June came over closer and smiled at me. “That was you a couple of times.” Then she said again, “Come on lets go” The rest of the story is in the song. I became that man. I put myself in his place and my mind, he finally won. I wish I knew who he is, and where he is. I’d send him a piece of Strawberry Cake.”

Below you can watch a Dinah Shore episode from 1975 where Johnny describes the origins of the song and sings it for your listening pleasure:

In New York city just walking the street
Ran out of money had nothing to eat
I stopped at the Plaza, that fancy hotel
Where you can check in if you’re well to do well…
The first of July and a hundred and four
I stopped at the Plaza’s front revolving door
I stepped in the door and went around for a ride
Treatin’ myself to the cool air inside
Then I found myself in a chandeliered room
Where people were dining and I hid in the gloom
My hunger pains hurt ’til I thought I would break
When a waiter brought out a big strawberry cake

Then I thought of Oxnard, just north of LA
Where I picked strawberries for many a day
Hard work with no future for the harvest was done
And I headed eastward a-travelin’ by thumb
And nobody wanted me here in this town
I felt like a stray dog they all kick around
Them berries reminded me of my bad breaks
I’m hungry and I want that strawberry cake

The rest of the text on the album reads as follows:

“By your possession of this album, you can consider yourself having been present twenty years ago in 1955. At the start of a career and it sound at Sun Records Studio in Memphis Tennessee, as Johnny Cash and the Tennessee Two cut their first record to a recently as September 1975. When Johnny Cash presented at London England’s Palladium his Johnny Cash Concert. From the standpoint of “Sound” to have been present at one would be the same as having attended the other. Times change, tastes change, and in order to conform some artists must change. Johnny Cash changed in keeping with the times; but as it turned out, not keeping with tastes. Many opinions were expressed to John and me, as to what should be done for the sake of conformity. Innovations were tried new arrangements, different material, engineering “gimmicks” but fortunately one item defied change. Through it all the voice and style remained constant and identifiable in some cases, nevertheless still there. If any change is perceptible in today’s recordings, as compared to those of twenty years ago, that change is of time as related to maturity of voice. This album, then, brings us around full circle. Back to the start of a career and sound. To point from which a digression was never needed. Here is what you have demanded. The basic honest, up-front Johnny Cash …. Better than ever.”

While I’ve never been the most devoted country fan – I’ve always preferred bluegrass – Johnny Cash stands out as a notable exception in my own playlists. He was a complex individual, one who was described as a “lens through which to view American contradictions and challenges.” (Miller, Stephen, Johnny Cash: The Life of an American Icon).

Johnny’s music and his life and his relationship with his beloved wife June were sufficient to make him a larger-than-life figure who earned an indelible place in musical history. I’m glad I got to live in his era, and regret only that I never got to see him perform live in concert. His likes will not be there again.