I found these “New Horoscopes” over at the Facebook page of Notixx; I’m not sure who the original artist/creator is, but it deserves a share, especially with the sick descriptions by Darcie Bell. Enjoy.

This Bat – You terrify most people. You have a preference for eating your big meals at night and have a hard time flying solo. People with this sign are prone to insomnia, have an ear for music, but could lack vision. You tend to annoy others with your need to be different and special, but it gets a little pretentious when you insist on sleeping upside down like some hippie vampire. Also, your undoing might be a broom.

An Ironic Mustache – Even though you think you may be cool and modern; you are a traditionalist who is stuck in the past. You may stubbornly cling to things that no longer serve you, but you may also be hiding a scar or hideous deformity for fear of ridicule. Some people find you sexy, but food can make your life a mess. You forget that your dad grew his mustache ironically, too, so you’re not that original.

Balls– It really isn’t your fault. You were pretty much born bipolar. One of you may be softer, more sensitive and the other might be a little hairier. Although you have been mythically associated with strength and independence, you are actually quite vulnerable and sad. People either want to gently cup you or pray for your destruction. Either way, you will probably spend your life sweaty, next to an asshole, living only to serve some dick.

Half A Taco – There you go, giving half of yourself away again, but no one mistakes your attempts at martyrdom for generosity anymore, kid. Now who’s gonna want you? You might have a hard shell, but you crack under pressure. People crave you when they are drunk and stoned, but find someone with a big appetite for your layered, spicy goodness, or you’ll just end up soggy and alone in the trash. 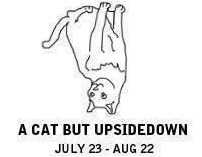 A Cat But Upside Down – Yeah, yeah, we see it, now can you stop putting that thing in our face you big show-off? You really will do anything for attention, kitty cat, but hey, why fix it if it ain’t broke? You might put people off with your aggressive demeanor, but you get the job done with your self-promotion and your ability to work hard, with a lot of flair. Although, no one is gonna call you classy, anytime soon.

Ricky Gervais – People often leave your company scratching their heads unsure if they’ve just witnessed genius or crap. You are critical to a fault, and although you are as loyal as they come, you often make your friends the butt of the joke. You have a hard time keeping your mouth shut. If you weren’t so irreverent and funny, you’d probably be the world’s most brutal English teacher. Pedantic on the verge of insanity, nothing and no one escapes your “witty” observations, eagle eye.

Murder – Everyone knows that you are sexy. People either dream about doing you or being done in by you, either way, you’re on everybody’s mind. You are complex and sometimes extremely passionate. You can be thoughtful and exacting and in many situations, justice is your sole motivating factor. You are often misunderstood, but you are poetic and bold. You inspire others to act on impulse or to only imagine. That said, you are one cold-blooded son of a bitch.

A Novelty Bass – People may write you off as a one-dimensional, but if they were to open you up, they would be surprised to see how much you really have going on in there. Most times you are silent, lurking in a dark room, but when you sense the presence of another, you spring into action. You may feel like a fish out of water, but you tend to be the center of attention. Also,you are surprisingly aggressive for someone who is mounted on a wall, but you are powered by external forces, making you the textbook co-dependent.

Shrimp Cocktail – A little bit sophisticated, a dash retro and over-the-top, you definitely know how to make an entrance. You’re all about the presentation and you always offer a little bit of adventure to those around you. You aren’t gonna fill anyone up, but who wants to be a boring old entrée when you can be the appetizer? Beware however, you may be the life of the party now, but you could also end up being served in bulk to fat tourists on cruise ships.

Bag – You are nothing if not practical. People trust you and they know they can depend on you to hold on to the things that matter to them. You work hard for yourself and for others, but sometimes the stress of your responsibility can become too great and you’ll tear yourself apart. You may not be the sexiest object in the world, but fuck it, you’ve got a job to do and you’re usefulness will be appreciated for generations to come. Or you’ll get crumpled and tossed out. Either way.

A White Guy With Cornrows – You are a walking contradiction. You make people laugh and there are a lot of things going on with you that just SHOULDN’T be happening at the same time. You don’t care what people think and you never will. You are nothing if not confidant, and you enjoy provoking others into spirited discourse about your chosen lifestyle. You may appear to be a bit strange and off, but you are knotted down tight, with a serious stubborn streak. Don’t try too hard to be something you aren’t, though, freakazoid, because you tend to create a pretty serious level of social awkwardness.

A Hand Turkey – You have a way of connecting people to their past which is both nostalgic and lame. You represent artistic expression at the most basic, primitive level. People project onto you whatever they want to see, but you remain at your core, consistent and unchanging. People keep you around for years, sometimes crudely deface you and mock you, but you still bring joy to people when they stumble upon you stuck in a book somewhere. You are at your best when you’re a little over the top.

Who thinks up stuff like this? I wish I had an imagination this vivid. For what it’s worth, I drew “balls.” Oh well.

One response to “A New Horoscope: I’m not as random as you think I salad…”