I’ve written about war before. I make no bones about the fact that I don’t see it as a productive human enterprise. This quote from Herbert Hoover below echoes the spirit of words from Chaucer that I have mentioned in the two essays linked above:

Recently on Facebook I posted this image, that I came across somewhere else: 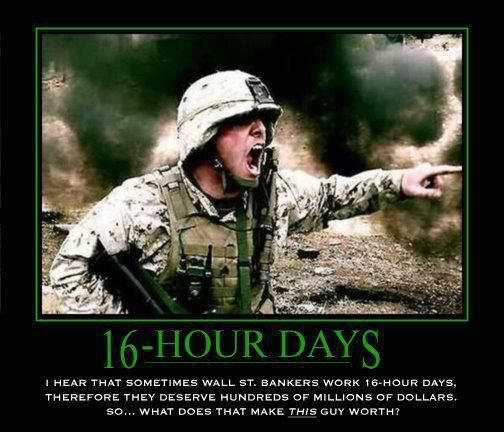 As a result, I got some pushback from people who, like me, are opposed to wars but who see the men and women who fight them as less than deserving of honor. Things like:

Well, the comments are not wrong – in a certain sense. But as I wrote elsewhere, these are two concepts that I can successfully juggle simultaneously.

I hate the idea of war, and the military-industrial complex. I hate the concept of politico-economic terrorism, backed up by the might of armies and navies. I hate wasting endless resources of our nation on futile, internecine foreign conflicts.

Yes, there are the relatively few Abu Ghreib perverts and My Lai killers and Afghanistan rogues, and these deserve opprobrium and punishment, but they also deserve pity – because they are the product of a system that is designed to obliterate humanity and foster robotic obedience. I weep for them and their families as much as I do the victims, once justice has been served.

But… for the overwhelmingly greater part, the boys and girls, men and women who wear the colors – some because they had to during the draft, some because they marched off believing that their cause was just and noble, some who signed up because it was that or jail, some who simply wandered in to the recruiting office because they had no idea what else to do… the ones who marched off and came back in pieces, or missing pieces, or damaged emotionally beyond all salvation, or who came back functional but hiding the deep scars of conflict forever, or who served as filing clerks far from the front because that’s what they were told to do – these people I honor above almost all politicians and bureaucrats and war-makers.

And as for those “noble causes,” note that I said “*believing* that their cause was just and noble,” not necessarily that it is. Hired gun or no, cannon fodder or no, noble cause or miserable one, I honor all who serve, and always shall.

In the meantime, I will do what I can with voice, votes, and any other means to build a world where their service is no longer needed.

One response to “Soldiers fight wars. Politicians declare them.”