I’ve long loved the comic strips. In high school I’d regularly run across the street for a cup of coffee and the Waterbury Republican, work the crossword, and catch up on the day’s funnies.

When webcomics became a thing, I subscribed to many. Way too many. One of them was responsible for my getting together with my wife, but the time-sink was worse than TV Tropes. Ultimately got pared down to 14, ones that have compelling story lines, or which make me smile, or which are relevant to how I see the world.

After lo, these many years – 28, more or less – I just pulled “Dilbert” off my list. When I was working in the corporate world, a lot of nonsense that I saw happening around me was reflected in the strip, and it was nice to think that it wasn’t just me that had to put up with management idiocy and the idiosyncrasies of co-workers. And in the early years, the strip could be painfully funny, particularly since I worked for a good many years in the tech sector. 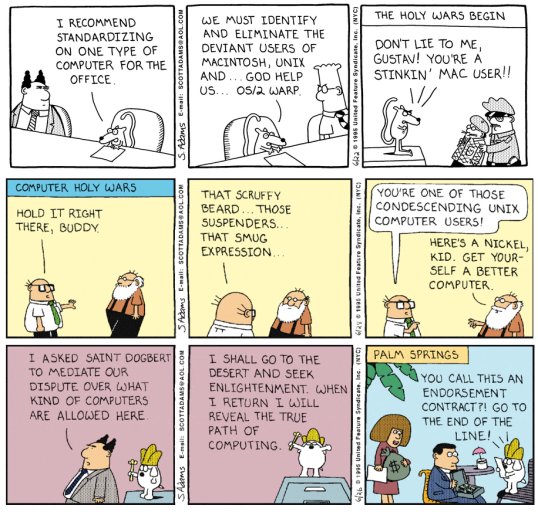 Last few years I’ve just gotten the feeling that Adams has run out of material, and he entered the stale zone that Garfield has been in for decades, and which Gary Larson and Bill Watterson so assiduously avoided. Still, I kept reading for the sake of tradition.

Lately, though, I added the fact that I just don’t click with the author’s world view, he being a staunch supporter of the cretin-in-chief that is currently disgracing the White House, and has even started injecting politics into his strips:

Courtesy of Paul Taylor, author of the incomparable Wapsi Square, comes this commentary:

So other than this one post, I don’t plan on being the kind of person who leaves something but who can’t leave it alone – you see a lot of these on the comments boards, folks who don’t like a strip and who come every day to complain about it.

I own a lot of previous Dilbert material that I still appreciate, and will continue to do so – but unless things change drastically in the future, I’ll just go elsewhere for my daily dose of smiles.