Anyone who has ever been in a relationship with a person of the opposite sex, or had the blessing of growing up with brothers or sisters, is painfully aware that men and women think differently. And since the first scribe put chisel to stone, people have been making jokes about it. It’s better than sitting in the middle of the floor weeping.

This meme has been around since December 17, 2016, first appearing in Spanish: 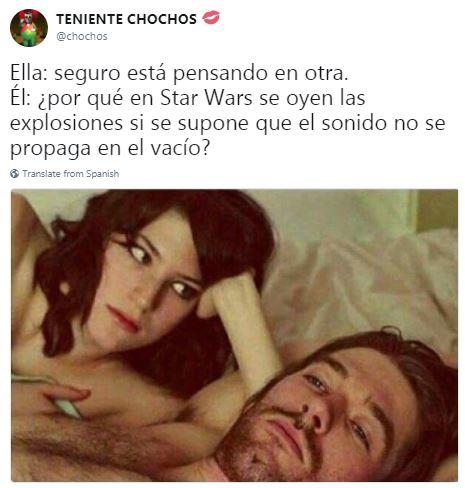 She: “I’m sure he’s thinking about someone else.”
He: “Why do we hear explosions in Star Wars if sound doesn’t travel in a vacuum?”

and later in many English versions:

There have been some masterful bits of humor on this topic created over the years, but I share with you two of my favorites. The first is from Dr. Mark Gungor, noted for “Laugh Your Way to a Better Marriage.” Watch this. Please. It’s funny.

The second is from one of the greatest humorists of all time, Dave Barry. This bit is extracted from “Dave Barry’s Guide to Guys,” which I first saw appear in the Deseret News on 10 May, 1995. It’s been shared in many formats across the net since that time, with either no attribution or incorrect ones, but it’s classic Barry all the way.

Let’s say a guy named Roger is attracted to a woman named Elaine. He asks her out to a movie; she accepts; they have a pretty good time. A few nights later he asks her out to dinner, and again they enjoy themselves. They continue to see each other regularly, and after a while neither one of them is seeing anybody else.

And then, one evening when they’re driving home, a thought occurs to Elaine, and, without really thinking, she says it aloud: “Do you realize that, as of tonight, we’ve been seeing each other for exactly six months?”

And then there is silence in the car. To Elaine, it seems like a very loud silence. She thinks to herself: Geez, I wonder if it bothers him that I said that. Maybe he’s been feeling confined by our relationship; maybe he thinks I’m trying to push him into some kind of obligation that he doesn’t want or isn’t sure of.

And Elaine is thinking; But, hey, I’m not so sure I want this kind of relationship, either. Sometimes I wish I had a little more space, so I’d have time to think about whether I really want us to keep going the way we are, moving steadily toward . . . I mean, where are we going? Are we just going to keep seeing each other at this level of intimacy? Are we heading toward marriage? Toward children? Toward a lifetime together? Am I ready for that level of commitment? Do I really even know this person?

And Elaine is thinking: He’s upset. I can see it on his face. Maybe I’m reading this completely wrong. Maybe he wants more from our relationship, more intimacy, more commitment; maybe he has sensed – even before I sensed it – that I was feeling some reservations. Yes, I bet that’s it. That’s why he’s so reluctant to say anything about his own feelings. He’s afraid of being rejected.

And Roger is thinking: And I’m gonna have them look at the transmission again. I don’t care what those morons say, it’s still not shifting right. And they better not try to blame it on the cold weather this time. What cold weather? It’s 87 degrees out, and this thing is shifting like a garbage truck, and I paid those incompetent thieving cretins 600 dollars.

And Elaine is thinking: He’s angry. And I don’t blame him. I’d be angry, too. I feel so guilty, putting him through this, but I can’t help the way I feel. I’m just not sure.

And Roger is thinking: They’ll probably say it’s only a 90-day warranty. That’s exactly what they’re gonna say, the scumballs.

And Elaine is thinking: Maybe I’m just too idealistic, waiting for a knight to come riding up on his white horse, when I’m sitting right next to a perfectly good person, a person I enjoy being with, a person I truly do care about, a person who seems to truly care about me. A person who is in pain because of my self-centered, schoolgirl romantic fantasy.

And Roger is thinking: Warranty? They want a warranty? I’ll give them a warranty. I’ll take their warranty and stick it . . .

“No!” says Roger, glad to finally know the correct answer.

(There is a 15-second pause while Roger, thinking as fast as he can, tries to come up with a safe response. Finally he comes up with one that he thinks might work.)

“Oh, Roger, do you really feel that way?” she says.

“That way about time,” says Elaine.

(Elaine turns to face him and gazes deeply into his eyes, causing him to become very nervous about what she might say next, especially if it involves a horse. At last she speaks.)

Then he takes her home, and she lies on her bed, a conflicted, tortured soul, and weeps until dawn, whereas when Roger gets back to his place, he opens a bag of Doritos, turns on the TV and immediately becomes deeply involved in a rerun of a tennis match between two Czechoslovakians he never heard of. A tiny voice in the far recesses of his mind tells him that something major was going on back there in the car, but he is pretty sure there is no way he would ever understand what, and so he figures it’s better if he doesn’t think about it. (This is also Roger’s policy regarding world hunger.)

The next day Elaine will call her closest friend, or perhaps two of them, and they will talk about this situation for six straight hours. In painstaking detail, they will analyze everything she said and everything he said, going over it time and time again, exploring every word, expression and gesture for nuances of meaning, considering every possible ramification. They will continue to discuss this subject, off and on, for weeks, maybe months, never reaching any definite conclusions, but never getting bored with it, either.

Meanwhile, Roger, while playing racquetball one day with a mutual friend of his and Elaine’s, will pause just before serving, frown, and say: “Norm, did Elaine ever own a horse?”

The uninitiated might ask, “If it’s so painful, why would you ever want to be in a relationship with someone who thinks so strangely? Well, for all the frustration that accrues to both sexes from dealing with their so-different significant others, it’s worth it. Every moment. I would be infinitely diminished without the companionship of my very strange wife, and we both know it.

Now, if you’ll excuse me, I’m going to go sit in my nothing box.