About a decade ago, my identity was stolen. An insurance card I had given to a family member was lost in the state of Florida, and some drone got his hands on it. All of a sudden I was being contacted by debt-collection companies for things like trips to a hospital in an ambulance, 9 months worth of rent, cell phone accounts with T-Mobile, and a host of others.

It took me about 4 years to get my credit reports cleaned up, and countless hours of time on the telephone, writing letters, and filing police reports. Through it all was dealing with the collection companies, and it was brutal. These people are relentless bullies, and they care about only one thing… collecting. Explaining to them that I did not owe said debts was fruitless. Explaining that I had been the victim of identity theft was wasting breath. Even after multiple explanations, I had agents offer to discharge the debt if I was willing to pay 50¢ on the dollar. Nothing I said made a difference. They kept calling until I informed them, by law, that they were no longer allowed to do so. [1]

Now comes word of a new scam being perpetrated on the public by a company called Corrective Solutions, and others like them. This article in LA Weekly outlines how DA’s offices have partnered with some very ugly, very mean people to terrorize consumers into paying stiff fees for bounced checks, all in the name of “diversion” – meaning keeping cases out of the court system – but really for only one purpose – increasing the flow of revenue into the DA’s coffers.

An extract from the article outlines the sad tale of Carole Hirth:

In fact, it was banker scheming that landed Carole Hirth in trouble last year. More than a dozen major banks have paid multimillion-dollar fines for reordering purchases and delaying deposits solely in order to generate overdraft fees. In Hirth’s case, PNC was holding her direct deposits until it withdrew her outgoing charges — effectively overdrafting her account so it could charge extra fees.

She knew none of this at the time she wrote a $393.86 check to Dominick’s, a Chicago grocery story. The 59-year-old was in the hospital being treated for Crohn’s disease when the check bounced. For some reason, the store never tried to redeposit it, which most merchants do. If it had, Hirth says, the check would have cleared. Instead, the Safeway-owned chain sent her a letter.

“I had been back from the hospital for just four days when I checked the mail and thought, ‘Oh, my God,’ ” she says.

Hirth went straight to Dominick’s, wrote a new check and paid a $35 bounce fee. She considered the problem fixed.

But four months later, she received a letter from the Cook County state’s attorney. It said that she’d been accused of deceptive practices and that she faced up to a year in jail and a $2,500 fine. The only way to avoid this fate was to pay $649.86, which included penalties and a diversion course.

“I already paid them,” Hirth says. “I contacted [the grocery store’s] ethics department and said this was just wrong. I spend enough money there. I told them they should work with me. I told them to look up my Safeway card. I’ve been shopping with them for the past 30 years!”

Safeway said there was nothing it could do. She’d have to contact the state attorney’s office.

Hirth called the toll-free number on the letter but got nowhere.

“They accused me of committing a fraudulent act. They said that if I don’t pay everything and take their class, I could be arrested and end up in jail. He was very, very mean,” she says. “I told him that I didn’t understand how that could happen. I said I’d already handled it, it should be cleared up, but he just went on and on and on.”

Hirth wrote another letter to Safeway, begging the grocer to contact the prosecutor’s office on her behalf. The letters and phone calls kept coming.

It wasn’t until she got in touch with Arons that she discovered she wasn’t being threatened by Cook County. It was Corrective Solutions, which has contracts with 21 counties in Illinois.

Notice three major instances of douchebaggery in this one single story:

The Napa Valley Register filed an article in October of 2012 describing a class-action suit against Corrective Solutions and another company, and outlining practices similar to what happened in Hirth’s case above, but the news is not good – most consumers won’t even benefit from  any possible settlement, and the companies will likely continue to operate in one form or another. Indeed, Corrective Solutions is a rebirth of American Corrective Counseling Services, which lost a class-action suit against it, filed for bankruptcy, paid nothing, and began operating a few months later under a new name, free and clear, as reported in the LA times article.

The fight against this kind of corporate and governmental misbehavior continues. The war will be long and hard, and there will be bodies left on the battlefield, many belonging to innocent victims who made honest mistakes and found themselves caught up in a web of greed. The good news is that many legal advocates are aware of what is happening, and will continue to fight until this sort of program is outlawed by statute.

In the meantime, the more people who know what’s happening, the more ammunition they have to fight back. Read the linked articles. Be careful with your finances, and don’t roll over for the bullies.

This has been an Old Wolf public service announcement.

[1] A recent example: A family member has set up payment arrangements with a collection company in Idaho, in order to pay off a medical bill. The payments have been kept current for the last 18 months. Despite that, this letter is sent out monthly:

No mention of current account status, no “thank you for your payment,” just the constant threat of legal action. I’ve written the office to complain about this lack of courtesy and ethics, and no one has ever bothered to respond.

Lor’ lumme, times is tough all over. People are actually starting to seriously use the “D” word for the first time since WWII. Today’s “Overboard” was funny, but also caused a cord in my heart to be plucked, because in some ways it’s not funny at all.

I remember reading this book to my kids when they were little, and it made me cry. Today, more folks than I care to count are really struggling, and I even feel the cold breath of economic terror from behind the door on occasion.

I’m hoping and praying that whoever is able to pull the economic strings in our country over the next four years can keep us from total meltdown, because folks, we’re only a couple of degrees away from an economic China Syndrome.

According to this article at Newser, “Penny Costs 2 Cents to Make, Mint Stumped on Fix”.

They’ve been trying to create new pennies out of all sorts of materials, but can’t seem to come up with a cheaper alternative.

From a numismatic standpoint, I would “die” to have one of these patterns: 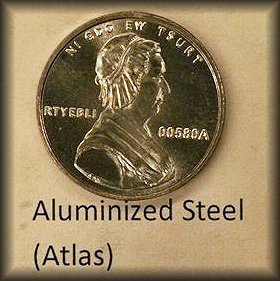 Martha Washington Penny Pattern, with “In God We Trust” and ‘Liberty” scrambled

But that aside, I have the perfect solution for the mint, if they’d just take my advice:

Oh, and you say a nickel costs 11¢ to make, but a penny costs 2¢? Well, once you’ve gotten rid of the penny, that leaves all that existing manufacturing equipment available for making the new, smaller 5¢ piece… for only 2¢. Yes, vending machine owners all across the country will have to adjust, but it wouldn’t be the first time. Times change.

From the October 2012 issue of the AARP Bulletin, this outrage:

Carol and Paul Kurland of Leavittown, PA, both in their late 80’s, added their daughter’s name to their bank accounts to allow her access to funds if they faced a sudden health crisis. “Given our advanced age, we thought it was a good idea,” Carol Kurland says. “But we fell into a trap.” Sadly, their daughter Amy, 56, died last October. Two months later, the Kurlands got hit with a tax bill for several thousand dollars. They were amazed to discover that, under Pennsylvania law, a third of the money in their accounts was considered to be Amy’s. They had “inherited” it and now owed 4.5% as tax. “Our daughter had none of her own money in the accounts,” says Kurland, “and in fact, had never even visited that bank. The Pennsylvania Department of Revenue says it regularly hears from unhappy people in similar situations. Banks in the state are not required to inform customers who add names to accounts that they’ll owe taxes if the new person dies first.

After the Kurlands’ tax bill arived, bank officials suggested that granting their daughter a power of attorney could have averted the liability.

“Why didn’t they tell us this before?” asks Carol Kurland. “You lose your daughter, and then you have to go through this. It’s been a bear.”