This colonist understands your pain.

This is my city – we have been there, done that, and bought the teeshirt. Granted, Salt Lake is a lot smaller than London, and the Winter Games not quite as big as the summer ones – but the overall impact on the region and its economy could be considered comparable.

Our home, its people and its culture were subject to microscopic scrutiny and ongoing disparagement as a result of the bidding scandal which brought us the games in the first place.

We suffered through partial or complete closure of our main freeway corridor for four years, as every major interchange, numerous bridges,  and every foot of the roadbed was rebuilt and expanded. While the freeway was disrupted, our light rail line was also being installed, and countless local roads were being ripped up to allow for increased traffic, and construction around the venue sites guaranteed endless detours and interminable delays. We were not amused.

Since 2005, the home of Francis Bacon, Thomas Beckett and Alec Guinness has seen the construction of the Olympic Stadium, the aquatic center, the Olympic Village, the Olympic Park, the Heron, and the uh, sorry, “the Shard.” Other buildings are close to completion, and I’m sure your nightmare has been at the very least equal to, if not greater than ours.

Ten years on, I would welcome the games back in a heartbeat – from where I sit, it was all worth it.

Just this year Salt Lake put forth a case to the USOC requesting consideration for a second bid in 2022. The USOC declined, saying that additional preparation would lend strength to the bid, so we may be looking at 2016 – but I can tell you that many people here were deeply disappointed. It was the experience of a lifetime.

As the games drew closer, there was a palpable feeling of pride and excitement in the air. Olympic fever is catching, and while there were a few diehard naysayers who grumbled through the entire experience, most people were delighted that we had a chance to showcase our city to the world, as well as host the games.

As soon as the call for volunteers went out, I jumped at the chance. 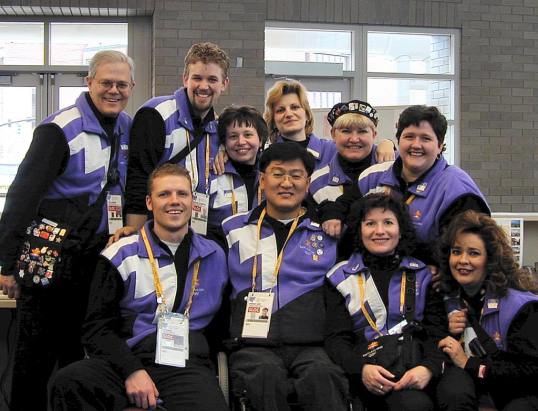 Here’s our gang – a part of International Client Services, working as interpreters in the Main Media Center. As a result of my job there, I wasn’t able to attend a single event in person, but we did get to see the dress rehearsal for the opening ceremony, and then attend an amazing party after the games – but because it was the media center, all the events were broadcast on huge screens all around the building, so I felt like I had missed almost nothing. And, we got to see a lot of athletes close up as they came in for interviews.

Outside the venues and downtown, there was always something going on:

Mimes on the street 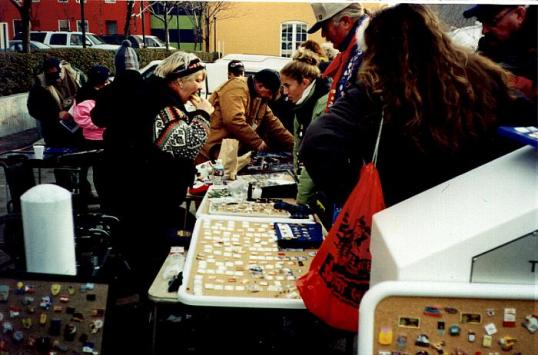 For just a brief moment in time, our city looked like this: 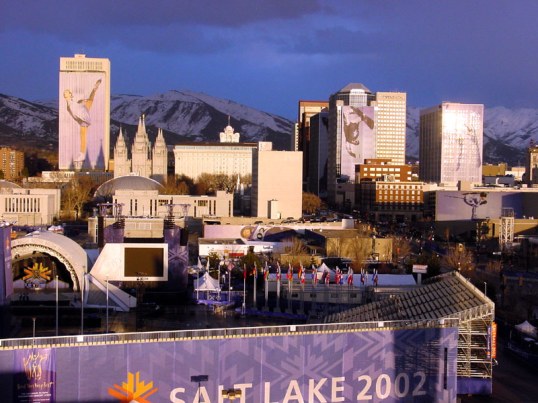 Bright, polished, dressed up in her finest gown for a two-week party.

And when the games commenced, it was all about the athletes; the amazing performances by the likes of Salé and Pelletier, Sarah Hughes, Fritz Strobl, Janica Kostelić, and many, many others – not to forget the UK Curling Team!

The scandals, the headaches, the challenges, the bumps along the road – all of it fades in comparison with the astonishing personal and team effort exerted by a handful of the best athletes the world will ever know. Watching them perform was riveting, and to have been the host city which made their performances possible was a splendid honor. And when the games were over, we still had all these wonderful venues which can now be enjoyed by the public and athletes from all over the country and all over the world.

So keep a stiff upper lip, cousins. The logistical nightmare will soon be over, but the memory of the united effort will last for a lifetime. I wish you a safe games, a successful games, and a lasting glow of both endurance and accomplishment.

[Edit: This was written before Mitt Romney went over there and disgraced himself in front of your entire nation. Sod his opinion – he should have known better.]