I’ve written often about affiliate marketers who use advertorials and farticles (advertisements designed to look like news articles) in their never-ending hunt for clicks and commissions. It’s an ongoing plague, but one that seems to have become an inextirpable part of the internet landscape.

As annoying as it is, this technique is not new. Here, an example from the Iowa City Daily Press from 16 May, 1905 (page 2). The snippet below is from a section of the paper entitled “News In Brief” and shows two advertisements shoehorned into the section dedicated to short news articles:

It just goes to show that historically, the journalistic drive to ethically bring the news to people has always been intermingled with a desire to earn as much revenue as possible, regardless of how it’s done.

In today’s world, the mad rush for clicks, eyeballs on ads, and sales conversions has turned the Internet into a wild west of unreliable or downright deceptive pages and advertisements, and it’s a true challenge to sift and sort the wheat from the tares. Teaching kids how to tell one from the other would be a valuable class in any high school or college.

The Old Wolf has spoken

Answer: His lips are moving. 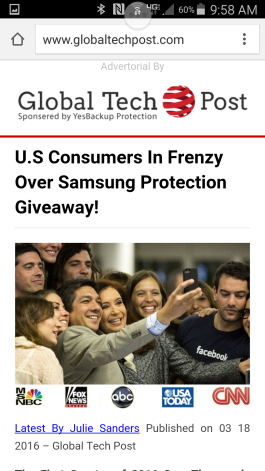 Let’s look at this ad that appeared on my Facebook feed (Android). The first one seems to indicate that US comsumers are urged to stop using WiFi after some sort of revelation by Donald Trump.

But click on the ad (which I never do, unless I’m following some sort of jiggery-pokery down the rabbit hole) and you end up with an advertorial (read: advertising thinly disguised to look like a news article) for YesBackup, a cloud backup service.

If you’re confident in your product’s abilities, Mr. or Ms. CEO, you shouldn’t resort to outright lies, trickery, and deception to get customers. Even the use of Advertorials (sometimes called “farticles” or “fake articles”) alone is enough to make your integrity suspect. Now this may be the the work of an affiliate marketer, that doesn’t really excuse the company – they are, after all, responsible for all of their advertising whether in-house or contracted out.

The takeaway: Be very careful clicking “sponsored ads” – the vast majority of them are going to be deceptive at best and outright scams at worst.