At once I began to get pushback on the source, so I thought I’d do a bit of digging – and what I found was interesting.

One thing is certain – the quote was part of Apple’s “Think Different” campaign. There were two versions of the commercial, one voice-overed by Steve Jobs himself (this one never aired):

And the one that actually hit the airwaves, with Richard Dreyfuss as the narrator:

But who actually wrote the text?

Not Jack Kerouac: “Sometimes attributed to Kerouac on the internet, perhaps because it evokes his famous quote from On the Road: “The only people for me are the mad ones, the ones who are mad to live, mad to talk, mad to be saved, desirous of everything at the same time, the ones who never yawn or say a commonplace thing, but burn, burn, burn, like fabulous yellow roman candles exploding like spiders across the stars and in the middle you see the blue centerlight pop and everybody goes “Awww!” ” (Wikiquote)

Not John Chapman, aka “Johnny Appleseed“: If you look closely at the Text Edit icon in Apple’s OS X, you’ll see the the quote there in the form of a letter to “Kate” from “John Appleseed.” 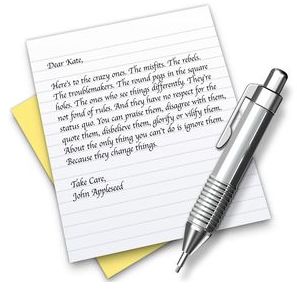 This has led some to attribute the quote to Chapman himself, which is just all wrong – the language is never something that the historical Johnny Appleseed would have used; on a side note of interest, this article at the Smithsonian suggests that Chapman was planting apples for hard liquor, not for eating.

“Apple cider provided those on the frontier with a safe, stable source of drink, and in a time and place where water could be full of dangerous bacteria, cider could be imbibed without worry.”

So who is the John Appleseed referred to in the icon, and who is Kate?

Not John Appleseed, the shadowy “Apple Insider:” This article at Techradar gives the background on who John Appleseed was – a Cupertino-based software developer who had developed Apple II software under his own name. When Apple’s CEO Mike Markkula (also a coder) developed some Apple II software under the pseudonym John Appleseed, the real Appleseed didn’t sue – he launched a campaign to meet Steve Jobs, as described in the article. Ultimately Appleseed’s image and name became the face of the iPhone and other products, although he was never really an “Apple Insider.”

Unfortunately for him, Jobs died, Apple evolved, and his usefulness as a mascot came to an end. As for Kate? Best guess is that she’s an open source text editor in KDE in the linux operating system. It is possible that during his time of interfacing with Steve Jobs, some of Appleseed’s ideas may have insinuated them into Jobs’ consciousness to have an impact later.

Yes, it was Rob Siltanen and Lee Clow (and a few others): Rob Siltanen chronicled the real genesis of the campaign’s text in an article at Forbes (caution: Forbes now makes you whitelist their site if you have AdBlock Plus installed, which I happen to think is a scummy move – but there it is.) Siltanen and Lee Clow were employed by the TBWA/Chiat/Day advertising agency that were shooting to get Apple’s business for a new campaign. The whole article is a fascinating first-person look at how the campaign was designed, pitched, and won.

Some of the original thoughts behind the text in question came from these quotes from “Dead Poet’s Society,” among others:

“Despite what anyone might tell you, words and ideas can change the world.”

So even though the text was really a collaborative effort, at the end Lee Clow made sure that Steve Jobs’ name was included in the credits on the campaign. As a result, I’m going with “Correct Attribution by Association” on the authorship of the quote.